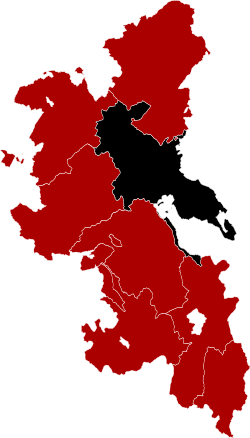 Cottesloe Hundred is a hundred of Buckinghamshire, extending from close to the Northamptonshire border south-east to that of Hertfordshire. It has land either side of the Tring Salient, although it is not contiguous, as the Dacorum Hundred of Hertfordshire intercedes. It had a population of 69,937 in 2011.

Until at least the time of the Domesday Survey in 1086 there were 18 hundreds in Buckinghamshire. It has been suggested however that neighbouring hundreds had already become more closely associated in the 11th century so that by the end of the 14th century the original or ancient hundreds had been consolidated into 8 larger hundreds. Cottesloe became the name of the hundred formed from bringing together the three hundreds of Cottesloe, Mursley and Yardley under a bailiff as early as 1255. These original hundred names still persisted in official records until at least the early part of the 17th century. As late as 1730, there are records referring to the "Cottesloe three-hundreds", reflecting the earlier history.[1] The court lee for Cottesloe hundred was usually held twice a year at Edlesborough.[2]