Bletchley Park is a grand country mansion at Bletchley in northern Buckinghamshire, now surrounded by the new town development of Milton Keynes. It is world famous as the central site of the Government Code and Cypher School during the Second World War which regularly penetrated the secret communications of the Axis Powers, and most importantly the German Enigma and Lorenz ciphers.

Today the house is preserved as a museum and educational centre, primarily to the work of the codebreakers of Bletchley.

The official historian of Second World War British Intelligence has written that the "Ultra" intelligence produced at Bletchley shortened the war by two to four years, and that without it the outcome of the war would have been uncertain.[1]

Bletchley appears in the Domesday Book as part of the Manor of Eaton. Browne Willis built a mansion there in 1711, but after Thomas Harrison purchased the property in 1793 this was pulled down. The estate was first known as Bletchley Park after its purchase by Samuel Lipscomb Seckham in 1877.[2] The estate of 581 acres was bought in 1883 by Sir Herbert Samuel Leon, who expanded the then-existing farmhouse[3] into the present "maudlin and monstrous pile" combining Victorian Gothic, Tudor Revival and Dutch Baroque styles.

In 1938, the mansion and much of the site was bought by a builder planning a housing estate, but in May 1938 Admiral Sir Hugh Sinclair, head of the Secret Intelligence Service (SIS or MI6) bought the mansion and 58 acres for use by GC&CS and SIS in the event of war.[4]

A key advantage seen by Sinclair and his colleagues (inspecting the site under the cover of "Captain Ridley's shooting party")[5] was Bletchley's geographical centrality. It was almost immediately adjacent to Bletchley railway station, where the "Varsity Line" between Oxford and Cambridge, whose universities were expected to supply many of the code-breakers, met the main West Coast railway line connecting London, Birmingham, Manchester, Liverpool, Glasgow and Edinburgh.

Watling Street, the main road linking London to the north-west (now the A5) was close by, and high-volume communication links were available at the telegraph and telephone repeater station in nearby Fenny Stratford.

Bletchley Park was known as "B.P." to those who worked there.[6] "Station X" (X=Roman numeral ten), "London Signals Intelligence Centre", and "Government Communications Headquarters" were all cover names used during the war.[7] The formal posting of the many Wrens working there (of the Women's Royal Naval Reserve) was to 'HMS Pembroke V'.

Initially, a wireless room was established at Bletchley Park. It was set up in the mansion's water tower under the code name "Station X",[8] a term now sometimes applied to the codebreaking efforts at Bletchley as a whole.

Due to the long radio aerials stretching from the wireless room, the radio station was moved from Bletchley Park to nearby Whaddon Hall to avoid drawing attention to the site.[9][10]

Subsequently, other listening stations, such as the ones at Chicksands in Bedfordshire, Beaumanor Hall, Leicestershire (where the headquarters of the War Office "Y" Group was located) and Beeston Hill Y Station in Norfolk, gathered raw signals for processing at Bletchley. Coded messages were taken down by hand and sent to Bletchley on paper by motorcycle despatch riders or (later) by teleprinter.

Bletchley Park is mainly remembered for breaking the German Enigma cypher, but its greatest cryptographic achievement may have been the breaking of the German on-line teleprinter Lorenz cipher (known at GC&CS as Tunny).

The wartime needs required the building of additional accommodation.[11] 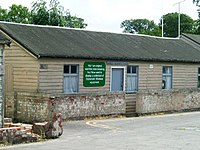 Hut 4, now a bar and restaurant for the museum 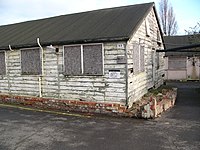 Often a hut's number became so strongly associated with the work performed inside that even when the work was moved to another building it was still referred to by the original "Hut" designation.[12][13] are:

In addition to the wooden huts there were a number of brick-built "blocks".

Much of Bletchley's equipment and documents was destroyed at the end of the war, and the secrecy imposed on Bletchley staff remained in force, so that most relatives never knew more than that a child, spouse, or parent had done some kind of secret war work,[26] or were told a cover story about clerical or statistical work. Churchill referred to the Bletchley staff as "the geese that laid the golden eggs and never cackled".[27] That said, occasional mentions of the work performed at Bletchley Park slipped the censor's net and appeared in print.[28]

Public discussion of the work at Bletchleyy Park began only with the publication of F W Winterbotham's The Ultra Secret in 1974.[29] In 2009 the British government announced that Bletchley personnel would be recognised with a commemorative badge.[30]

After the war, the site passed through a succession of hands[31] and saw a number of uses, including as a teacher-training college and local GPO headquarters. By 1991, the site was nearly empty and the buildings were at risk of demolition for redevelopment.

In February 1992, the Milton Keynes Borough Council declared most of the Park a conservation area, and the Bletchley Park Trust was formed to maintain the site as a museum. The site opened to visitors in 1993, and was formally inaugurated by HRH The Duke of Kent as Chief Patron in July 1994. In 1999, the Trust concluded an agreement with the landowner, giving control over much of the site to the Trust.[32]

View of the back of the rebuilt Bombe

As well as The National Museum of Computing, the park is also home to a number of other exhibits.[34] 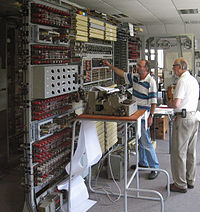 Bletchley Park has appeared in numerous television and film guises and other works, including: