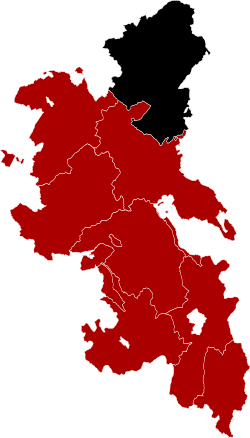 Newport Hundred is a hundred of Buckinghamshire. It is situated in the north of the county and adjoins Bedfordshire and Northamptonshire. It was commonly known as 'the three hundreds of Newport' because it amalgamated three earlier (11th-century) hundreds: Bonestou, Moulsoe and Siglelai (or Seckley).

Until at least the time of the Domesday Survey in 1086 there were 18 hundreds in Buckinghamshire. It has been suggested however that neighbouring hundreds had already become more closely associated in the 11th century so that by the end of the 14th century the original or ancient hundreds had been consolidated into eight larger hundreds.[1] Newport became the name of the hundred formed from the combined 11th-century hundreds of Bonestou, Moulsoe and Sigelai although these original names still persisted in official records until at least the early part of the 17th century. The court leet was every three weeks near Gayhurst and in 1830 also took place at the Swan Inn, Newport Pagnell.[2]

Traces of the moot hill of Sigelai Hundred were discovered by archaeologists working for Milton Keynes Development Corporation, during the construction of Central Milton Keynes; the site is behind the central library and has been reconstructed.[3]