Dorney Lake (also known as Eton College Rowing Centre, and as Eton Dorney as a 2012 Olympics venue) is a purpose-built rowing lake near the village of Dorney in Buckinghamshire. It lies near the towns of Windsor and Eton, close to the River Thames.

The lake is privately owned and financed by Eton College, which spent £17 million developing it. Additional grants, totalling £500,000, were obtained from Sport England, UK Sport, the Department for Culture, Media and Sport and the South East England Development Agency in order to build the lake's finish tower. The project was completed in 2006, after 10 years of construction.[1] Although it is primarily for use by the school, the facilities are hired out for rowing, as well as for canoeing, dragon boat racing and triathlon training.

The lake was a 2012 Summer Olympic venue, hosting rowing and canoe sprint — the whitewater events took place at the Lee Valley White Water Centre at Waltham Abbey in Essex. It was also a 2012 Paralympic venue for rowing. To provide for Olympic spectators, the existing facilities were enhanced to include 20,000 additional seats; most of these seats being temporary, and subsequently removed. Construction began in October 2009 of enhancements to Dorney Lake, including a new cut-through between the competition lake and the return lane, a new bridge and an upgraded access road, funded by the Olympic Delivery Authority.[2] During the Olympic events, Dorney Lake was staffed by around 3,500 personnel, including volunteers.[3] A temporary bridge linked the Dorney Lake site to Windsor Racecourse, where a pick-up and drop-off point for Olympic spectators was established.[4]

As of July 2012, Dorney Lake has hosted the following international rowing events: 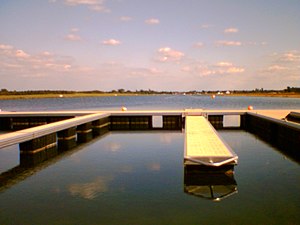 Since the lake was opened, a number of annual regattas that were previously held on the River Thames have been transferred to the lake. These include the following:

The public is allowed to use the grounds of Dorney Lake on all but a few days of the year. The 2-kilometre-long flat, straight paths that run along each side of the main lake make it a popular venue for runners, inline skaters, and even cross-country skiers practising with roller skis.