Amersham is a market town in Buckinghamshire, amongst the Chiltern Hills. It has the farthest railway station on the London Underground network, on the Metropolitan Line, allowing it to be part of the London commuter belt.

Amersham is split into two distinct areas: Old Amersham and Amersham on the Hill, with Amersham Common as a smaller area 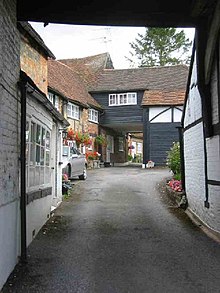 Old Amersham, the original town, lies in the valley of the River Misbourne. Its broad High Street is lined with Georgian buildings and older, shops jostling with houses, private alleys darting off and giving a glimpse of hidden gardens and courtyards. The 13th century parish church of St. Mary's stands off the High Street. The High Street has several coaching inns with their distinctive coach arches.

In the middle of the High Street stands the Market Hall, built in 1682. The Hall is a wel preserved example of a seventeenth century guildhall, with an open market place on the ground floor and the council chamber above. There is even a prison cell on the ground floor. The hall is still used for markets.

Amersham-on-the-Hill is the larger, modern part of Amersham, which grew rapidly around the railway station in the early part of the 20th century. It is directly north of the Old Town. Amersham on the Hill is where the practical shops are found, if not the charm.

The area of now known as Amersham on the Hill was called "Amersham Common" until the Metropolitan Railway came in 1892. After this date growth of the new area of the town gradually accelerated, with much work being done by the architect John Kennard. It is now known locally as "Top Amersham", "the Top Town" or "Sham"[1]).

"Amersham Common" now refers to the parts of town to the east.

Records of Amersham date back to Anglo-Saxon times. The Domesday Book of 1086 records it as Elmodesham. The Domesday entry is as follows:

Geoffrey de Mandeville holds Amersham. It answers for 7½ hides. Land for 16 ploughs; in lordship 2 hides; 3 ploughs there. 14 villagers with 4 smallholders have 9 ploughs; a further 4 possible. 7 slaves; meadow for 16 ploughs; woodland 400 pigs. The total value is and was £9; before 1066 £16. Queen Edith held this manor.

Queen Edith was the wife of King Edward the Confessor and sister of King Harold II. After her death in 1075 the land passed to King William the Conqueror, who granted it to Geoffrey de Mandeville.

In 1200 Geoffrey, Earl of Essex obtained a charter for Amersham allowing him to hold a Friday market and a fair on 7 and 8 September. In 1613 a new charter was granted to Edward, Earl of Bedford, changing the market day to Tuesday and establishing a statute fair on 19 September.[2]

In 1521, seven Lollard dissenters, William Tylsworth, John Scrivener, Thomas Barnard, James Morden, Robert Rave, Thomas Holmes and Joan Norman, were burnt at the stake in Amersham. A memorial to them was built in 1931 and is inscribed as follows:

In the shallow of depression at a spot 100 yards left of this monument seven Protestants, six men and one woman were burned to death at the stake. They died for the principles of religious liberty, for the right to read and interpret the Holy Scriptures and to worship God according to their consciences as revealed through God's Holy Word.

The Universal Magazine of September 1749 (p139) quotes that 'William Tylesworth' was in fact burnt in 1506, and that Thomas Bernard and James Morden, a labourer, were burnt about two years later. 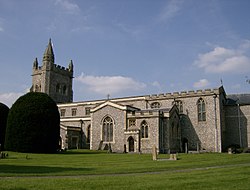 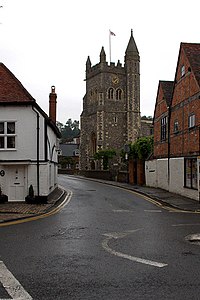