From Wikishire
(Redirected from Chiltern Hills)
Jump to: navigation, search 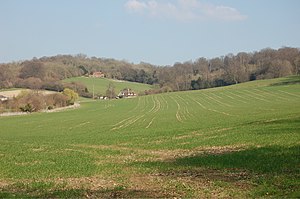 The Chilterns near Checkendon, Oxfordshire

The Chilterns or Chiltern Hills are a range of hills which stretch in a straight line from southwest to northeast from the River Thames at Goring-on-Thames to the Dunstable Downs, in the counties of Oxford, Buckingham, Hertford and Bedford. The highest point of each of these counties is found along the ridge of the Chilterns, almost in the straight line above the scarp.

At Goring, the Thames bursts through the hills, in what is known as the Goring Gap. South of the river are the Berkshire Downs, which are geologically part of the same structure.

The Chilterns form a chalk escarpment and indeed the hills have a dramatic scarp slope on the north-western face, and a gentler, wooded dip slop to the southeast. The mass of the hills is cut through with wooded valleys.

A large portion of the hills was designated officially as an Area of Outstanding Natural Beauty in 1965. 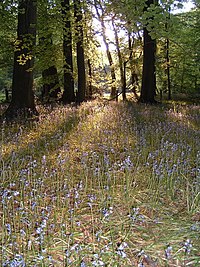 The name of the Chilterns is ancient. It appears in the Tribal Hidage, a Mercian document written at some time between the 7th and 9th centuries, in the name of one tributary tribe or sub-kingdom, the Cilternsæte ("Chiltern inhabitants"). The Tribal Hidage valued the territory of the Cilternsæte at 4,000 hides. Ciltern would have been pronounced just as "Chiltern" is today.

The origin of "Chiltern" is uncertain. Eilert Ekwall suggested that "Chiltern" may be of Brythonic origin, and suggests from the old British language an adjective celto- meaning "high" with the suffix -erno-.

The Chilterns cover an area of 322 square miles and are 11 miles at their widest. They stretch fo 46 miles in a southwest to northeast diagonal from Goring-on-Thames in Oxfordshire, through Buckinghamshire, by way of the Dunstable Downs and Deacon Hill in Bedfordshire, to near Hitchin in Hertfordshire.[1]

The boundary of the hills is clearly defined on the northwest side by the scarp slope. The dip slope, by its nature, merges with the landscape to the southeast.[2] Similarly, the River Thames provides a clear terminal to the southwest, whereas northeast of Luton the hills decline slowly in prominence.[3] 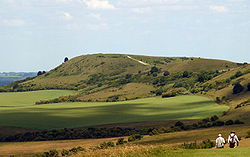 The highest point of the Chilterns is at 876 feet above sea level at Haddington Hill near Wendover in Buckinghamshire; a stone monument marks the summit. The nearby Ivinghoe Beacon is a more prominent hill, although its altitude is only 817 feet.[4] The latter is the starting point of the Icknield Way Path and the Ridgeway long distance path, which follows the line of the Chilterns for many miles to the west, where they merge with the Wiltshire downs and southern Cotswolds.

To the east of Ivinghoe Beacon is Dunstable Downs, a steep section of the Chiltern scarp. Near Wendover is Coombe Hill, 853 feet above sea level. The more gently sloping country of the dip slope to the southeast contains much beautiful beech woodland and many fair villages.

Landscape and land use

Enclosed fields account for almost 66% of the AONB area. The next most important, and archetypal, landscape form is woodland, covering 21% of the Chilterns, which is thus one of the most heavily wooded areas in England. Built-up areas (settlements and industry) make up over 5% of the land area; parks and gardens nearly 4%, open land (commons, heaths and downland) is 2%, and the remaining 2% includes a variety of uses, including communications, military, open land, recreation, utilities and water.[1]

The Chilterns are almost entirely located within the Thames drainage basin, and also drain towards several major Thames tributaries, most notably the Lea, which rises in the eastern Chilterns, the Colne to the south, and the Thame to the north and west. Other rivers arising near the Chilterns include the Mimram, Ver, Gade, Bulbourne, Chess, Misbourne and Wye. These are classified as chalk streams, although the Lea is degraded by water from road drains and sewage treatment works.[5]

The River Thames flows through a gap between the Berkshire Downs and the Chilterns. Portions of the northern and north-eastern Chilterns around Leighton Buzzard and Hitchin are drained by the Ouzel, Flit and Hiz, all tributaries of the Great Ouse, the last two by way of the Ivel.

A number of transport routes pass through the Chilterns in natural or man-made corridors. There are also well over a thousand miles of public footpaths in the Chilterns, including long-distance trackways such as the Icknield Way and The Ridgeway.[6]

The hills present a long barrier to communication between the busy commercial centres of southeastern Britain and the Midlands and so from ancient times routes have skirted the edge or followed the valleys through the hills. One major Roman road, Akeman Street, followed the valley of the River Bulbourne up through the hills, and the same river valley provides a route for the modern A41 and for the main railway line from London to Birmingham, while Watling Street followed the River Ver, as does the A5 today.

Railways passing through the hills include the Chiltern Main Line by way of High Wycombe and Princes Risborough, and the London to Aylesbury Line. Nearby the West Coast Main Line runs through Berkhamsted. The Great Western Main Line and its branches such as the Henley and Marlow branch lines link the southern side of the Chilterns with London Paddington. In 2012 the Government announced that the proposed High Speed 2 rail route would pass through the Chilterns near Amersham, partly through tunnels and partly at surface level,[7] a decision which has caused a great deal of protest locally.

There are no navigable rivers in the Chilterns though the River Thames flows by their foot. The Grand Union Canal passes through the Chilterns between Berkhamsted and Marsworth following the course of the Colne, Gade, Bulbourne and (after crossing a watershed) the Ouzel. This canal has branches ("arms") to Wendover and to Aylesbury. 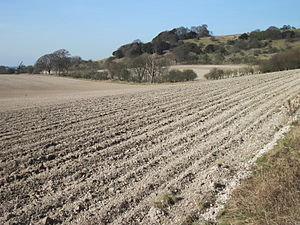 The chalk escarpment of the Chiltern Hills overlooks the Vale of Aylesbury, and approximately coincides with the southernmost extent of the ice sheet during the Anglian glacial maximum. The Chilterns are part of a system of chalk downlands throughout eastern and southern Britain, formed between 65 and 95 million years ago,[1] and comprising rocks of the Chalk Group and which also includes Salisbury Plain, Cranborne Chase, the Isle of Wight and the South Downs, in the south. In the north, the chalk formations continue northeastwards across north Hertfordshire, Norfolk and the Lincolnshire Wolds, finally ending as the Yorkshire Wolds in a prominent escarpment, south of the Vale of Pickering.

The beds of the Chalk Group were deposited over the buried northwestern margin of the Anglo-Brabant Massif during the Upper Cretaceous.[8] During this time, sources for siliciclastic sediment had been eliminated due to the exceptionally high sea level.[9] The formation is thinner though the Chiltern Hills than the chalk strata to the north and south and deposition was tectonically controlled, with the Lilley Bottom structure playing a significant role at times.[8] The Chalk Group, like the underlying Gault Clay and Upper Greensand, is diachronous.[9]

During the late stages of the Alpine Orogeny, as the African Plate collided with Eurasian Plate, Mesozoic extensional structures, such as the Weald Basin of southern Britain underwent structural inversion.[8] This phase of deformation tilted the chalk strata to the southeast in the area of the Chiltern Hills. The gently dipping beds of rock were eroded, forming an escarpment.

The chalk strata are frequently interspersed with layers of flint nodules which apparently replaced chalk and infilled pore spaces early in the diagenetic history. Flint has been mined for millennia from the Chiltern Hills. They were first extracted for fabrication into flint axes in the Neolithic period, then for knapping into flintlocks. Nodules are to be seen everywhere in the older houses as a construction material for walls.

In pre-Roman times, the Chiltern ridge provided a relatively safe and easily negotiable route across southern Britain, thus the Icknield Way (commonly believed to be one of Britain's ancient prehistoric trackways) follows the line of the hills.

One of the principal Roman cities in the Roman province of Britannia was sited at Verulamium (now St Albans) and there are significant Roman and Romano-British remains in the area. A major Roman road, Watling Street, passes through the hills along the valley of the River Ver.

In the Anglo-Saxon period the hills formed a minor kingdom or province; that of the Cilternsæte; the name "Chilternset" did not survive to the modern era as "Dorset" and "Somerset" do.

Berkhamsted Castle was a major royal residence in the earlier Middle Ages. The Tudor sovereigns had a hunting lodge in the Hemel Hempstead area.

Until the coming of the railways and, later, the motor-car, the Chilterns were largely rural with country towns situated on the main routes through the hills. The position of the hills, northwest of London, affected the routing of major roads, railways and canals. These were funnelled through convenient valleys (for example at High Wycombe and Hemel Hempstead) and encouraged settlement and, later, commuter housing. As at 2002 there were 100,000 people living within the AoNB area of the Chilterns.[6]

The western edge of the Chilterns is sliced with wooded valleys running up perpendicular to the escarpment beyond. This landscape is notable for its ancient strip parishes, elongated parishes with villages in the flatter land below the escarpment and woodland and summer pastures in the higher land.[10]

Strip parishes partly in the Chilterns

The hills have been exploited for their natural resources for millennia. The chalk has been quarried for the manufacture of cement, and flint for local building material. Beechwoods supplied furniture makers with quality hardwood. The area was once (and still is to a lesser degree) renowned for its chair-making industry, centred on the towns of Chesham and High Wycombe (the nickname of Wycombe Wanderers Football Club is "the Chairboys"). The clean water from the aquifer is still used for public supply and the rivers and streams have fed watercress beds. The chalk of the hills is an important aquifer, exploited to provide water supplies in the area; it has been suggested that over-exploitation has led to the disappearance of some streams. 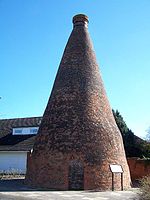 In a region short of building stone, local clay deposits and timber provided the raw materials for brick manufacture. Where available, flint was also used for construction; it is still used in modern buildings, although restricted to decoration to give a vernacular appearance.

In modern times, as people have come to appreciate open country, the area has become a visitor destination and the National Trust has acquired land to preserve its character, for example at Ashridge, near Tring. In places, with the reduction of sheep grazing, action has been taken to maintain open downland by suppressing the natural growth of scrub and birch woodland. In the 1920s and 1930s, the Youth Hostels Association established several youth hostels for people visiting the hills.

The hills have been used as a location for telecommunication relay stations such as Stokenchurch BT Tower and that at Zouches Farm.