Llanberis is a village in Caernarfonshire, lying at the foot of Snowdon, on the southern banks of Llyn Padarn in Snowdonia. It takes its name from Saint Peris, an early Welsh saint.[1]

The village stands in a pretty location, beneath the towering slopes of Snowdon, on the banks of a long mountain lake, Llyn Padarn, and in the narrow gap between that lake and its sister, Llyn Peris in which gaps stands Dolbadarn Castle.

According to the United Kingdom Census 2001, the population of Llanberis was 1,954. The census also revealed that 81% of the population speak Welsh fluently, with all of those aged 10–15 able to speak the language.

The village originally grew around the slate quarrying industry,[2] but since the closure of the quarries the main employers have been tourism, the Dinorwig power station, a pumped storage hydroelectric station, Siemens Diagnostics and DMM.

The ruins of Dolbadarn Castle, built by Llywelyn ap Iorwerth in the 13th century, stand above the village, famously painted by Richard Wilson and by J M W Turner.[3]

Llanberis best known as the starting point for most walks up Snowdon, the highest pmountin in England and Wales, for it is here that the Llanberis Path begins.

The Llanberis Path begins in the village, and although one of the longest routes, it is therefore the shallowest and hence the easiest. It is by far the most popular walking route to the summit.[4]

The path largely follows the line of the Snowdon Mountain Railway, which also begins in Llanberis. 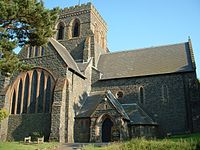 Other attractions in the village include the Snowdon Mountain Railway, the National Slate Museum, the Llanberis Lake Railway and Padarn Country Park. Tours of Dinorwig power station are available from a purpose built visitor centre.[5]

Llanberis is also a centre for outdoor activity|outdoor activities including walking, mountaineering, climbing, mountain biking, pony trekking, water sports and Scuba Diving at the Vivian diving centre. The Snowdon Race takes place on the fourth Saturday in July, an international fell race to the summit of Snowdon returning to the village.[6]

LLMRT, Llanberis Mountain Rescue Team is one of the busiest mountain rescue teams in the country with 90 call outs in 2008.[7] The team is run entirely by volunteers who rely solely on donations from the public to fund the rescue work they carry out. As an extension of the emergency services they can be called out 24 hours a day, 365 days of the year.

LLAMFF, the Llanberis Mountain Film Festival began in 2004.[8] It is now an annual event. 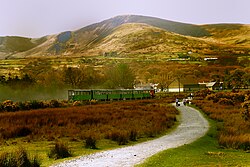 The best way to get to Llanberis is by car on the A4086 southeast from Caernarfon.

The village used to be served by Llanberis railway station on a branch line of the Carnarvonshire Railway until its closure in 1964.[9] Bus services to Llanberis are provided mainly by Padarn Bus, who are based in the village, and include a number of open-top bus routes. 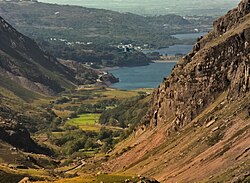 View from the Llanberis Pass
Retrieved from "https://wikishire.co.uk/w/index.php?title=Llanberis&oldid=6130"
Categories: