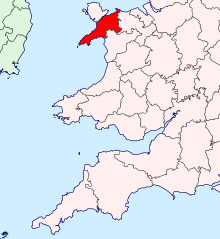 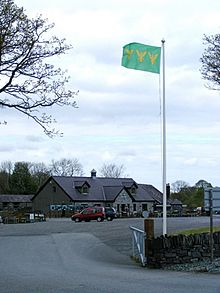 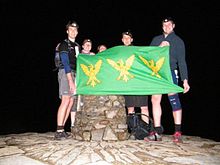 The flag of Caernarfonshire displayed on the summit of Mount Snowdon, the county's highest point.

The Caernarfonshire flag is the flag of the county of Caernarfon, registered with the Flag Institute as the official flag of the county in 2012. The origins of the emblem of the three eagles arranged in fess on a green field revolve around the ancient King of Gwynedd, Owain Gwynedd, to whom the symbol was attributed as his coat of arms.

Owain Gwynedd was born around 1100 and became King of Gwynedd in 1137, ruling until 1170. He claimed the title "King of Wales" and though this claim went unrecognised, and indeed though he was the last to bear the title "king", he sired the line which ruled Gwynedd and ultimately attained the title "Prince of Wales" until the defeat and death of Llywelyn the Last, Owain's great-great grandson in 1282.

In 1415 Henry V's great victory at the Battle of Agincourt was won, a victory celebrated two hundred years later by the poet Michael Drayton in his work The Battaile of Agincourt (1627) in which he wrote that:

Those of Caernaruon not the least in speed,
Though marching last (in the mayne Armies face)
Three golden Eagles in their Ensigne brought,
Vnder which oft braue Owen Guyneth fought.

By the early twentieth century the design can clearly be seen to have remained in the public consciousness as the county emblem when, in his 1920 work on county identities Story of the Shire, Frederick Hackwood calls the three golden eagles of Caernarfonshire as an "authentic" and "significant" badge of the county, as well as reciting their association to the Romans of antiquity.[2]