Betws-y-Coed is a delightful village in Caernarfonshire, standing amongst the woods on the western bank of the River Conwy where that river is joined by several streams from the hills. The village stands also on a road junction, where the Conwy is bridged by the A5.

The name of the village is Welsh and means "Prayer-house of the Wood". The word Betws or Bettws for "prayer-house" is generally thought to have come into Welsh from the Old English bed-hus, which is to say "prayer-house" or "oratory".[1]

The earliest record of the village is as Betus, in 1254.

Betws-y-Coed lies in the Snowdonia National Park, in a valley near the point where the River Conwy is joined by the River Llugwy and the River Lledr, and was founded around a monastery in the late sixth century. The village grew very slowly with the development of the local lead mining industry. In 1815, the Waterloo Bridge built by Thomas Telford to carry the new trunk road (now the A5) across the River Conwy and through the village, brought considerable transport-related development. The village became a major coaching centre between Corwen (to the east) and Capel Curig (to the west) on the Irish Mail route from London to Holyhead, which led to the improvement of the roads south to Blaenau Ffestiniog and north to Llanrwst and Conwy. It is a primary destination for the purpose of road signs.

Construction of Betws-y-Coed railway station in 1868 heralded the arrival of the railway line from Llandudno Junction railway station, and resulted in the village's population increasing by around 500.

The village has a large village green which is the playing field for the local football team. The green is bounded on its western side by the A5 Trunk Road with 19th century buildings including shops, hotels, and St Mary's Church.

St Mary's Church was built on the site of a former cockpit and fairground. Although it is of early English appearance, it was completed as recently as 1873, the internal roof timbers testifying to this relatively young age. The interior also features various types of stone - local bluestone, sandstone (and floor tiles) from Ancaster, and black serpentine from Cornwall. The square bell tower was added in 1907, and the integral church hall was added in the 1970s. The commemorative stone was laid by the Earl of Ancaster in 1976. 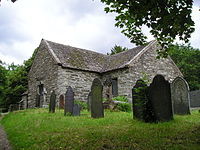 St Michael's church - the original "prayer house in the wood" 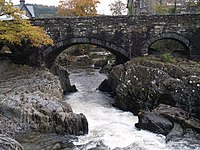 Apatr from the village itself, the setting of which is a delight to the eye, there are facilities for the many visitors.

On the southern side of the green is Betws-y-Coed railway station with cafés and tourist shops and a car park. In the former railway goods yard, reached from the station, is the Conwy Valley Railway Museum with its extensive miniature railway. The village also has a motor museum with a collection of over thirty vintage cars and early automobiles.

Other attractions in the village include the Miners' Bridge and the fourteenth century church of St Michael, which is the origin of the name Betws (meaning "prayer-house"). There are scenic walks beside the river Llugwy, which flows through the village, and the River Conwy provides further attractions including the Fairy Glen, the Conwy fish ladder and waterfalls including the Conwy Falls. The Pont-y-Pair Falls are in the centre of the village (also the site of a 53 hole rock cannon), and a mile upstream are the famous Swallow Falls.

The picturesque Llyn Elsi reservoir nearby is popular with walkers and anglers, and also provides water for the village.

The village is also a centre for outdoor activities and lies within the Gwydyr Forest.

The Betws-y-Coed railway station, a passenger station on the Conwy Valley Line from Llandudno Junction to Blaenau Ffestiniog, is an integral part of the settlement's tourism industry. The railway station is also a bus interchange used by the Snowdonia National Park Sherpa bus services to Capel Curig, Pen-y-Gwryd, Pen-y-Pass, Beddgelert, Porthmadog, Tryfan and Bethesda.

The Conwy Valley line was constructed by the London and North Western Railway with the primary aim of transporting dressed slate from the Blaenau Ffestiniog quarries to a specially built quay at Deganwy for export by sea. The original plans envisaged a railhead at Betws-y-Coed and a large goods yard was established with intended interchange to a proposed narrow gauge line (with a significant saving in construction costs) via the steeply graded Lledr Valley to Blaenau Ffestiniog. Other entrepreneurs proposed narrow gauge lines from Corwen to Betws-y-Coed, Penmachno to Betws-y-Coed and from Beddgelert to Betws-y-Coed. In the event the line to Blaenau, which was not completed until 1879, was built to standard gauge and the other proposals were abandoned.

Extensive passenger and goods facilities were however provided at Betws-y-Coed, where the station, which was opened in 1868, adjoins the London to Holyhead A5 turnpike road and was thus ideally located to serve many isolated communities in Snowdonia and also the rapidly developing tourist industry. In the LMS timetables the station was listed as "Bettws-y-Coed - Station for Capel Curig". There was originally a passing loop with full length up and down platforms. The loop was removed some years ago but the footbridge that previously gave access to the now removed down platform has been retained and provides access to the Conwy Valley Railway Museum, which runs a miniature railway and other attractions in the former goods yard.

The comprehensive range of passenger station buildings has been preserved and sympathetically adapted for use as cafes and tourist shops. The station now functions as an unstaffed halt. The platform was refurbished and a Passenger Information System installed in Spring 2009.