Bardsey Island lies two miles off the Llŷn peninsula of Caernarfonshire. It is about 440 acres in extent, so despite its modest size it is the fourth-largest offshore island in Wales, half a mile wide and a mile long. The north-east rises steeply from the sea to a height of 1,798 feet at Mynydd Enlli,[1] while the western plain is low and relatively flat cultivated farmland; to the south the island narrows to an isthmus, connecting to a peninsula.[2] The island forms both the southernmost and westernmost points of Caernarfonshire.

The Welsh name Ynys Enlli means "The Island in the Currents", while the English name means the island of the Viking chieftan named "Barda", or more romantically refers to the "Island of the Bards".[3]

Bardsey is the legendary "Island of 20,000 saints", for many centuries the site of a monastery founded by St Cadfan in 516.[4] In mediæval times it was a major centre of pilgrimage and, by 1212, belonged to the Augustinian Canons Regular.[5] Pilgrims would meet at the Aberdaron for the dangerous crossing to the "Isle of the Currents", eating a fortifying meal at the Cegin Fawr, which still stands there. The monastery was dissolved and its buildings demolished by Henry VIII in 1537,[6] but the island remains an attraction for visitors to this day.[6]

Bardsey Island is now as famous for its wildlife and rugged scenery. A bird observatory was established in 1953, largely due to the island's position on important migration routes.[7] It is of European importance, cited as a nesting place for Manx shearwaters and choughs, its rare plants, and habitats undisturbed by modern farming practices. It is one of the best places in Gwynedd to see grey seals, and the waters around the island attract dolphins and porpoises.[7]

The spirituality and sacredness of the island, its relative remoteness, and its legendary claim to be the burial site of King Arthur (one of many), have given it a special place in the cultural life of Wales, attracting artists, writers and musicians to its shores.[8] It has inspired award winning literature,[9] and attracted internationally renowned singers.[10] 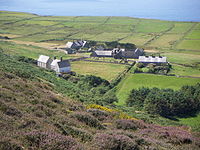 The island was inhabited in neolithic times, and traces of hut circles remain. During the fifth century monastery cells stood here, it is believed. In 516 according to legend St Cadfan arrived from Brittany and, under his guidance St Mary's Abbey was built.[11]

For centuries the island was important as "the holy place of burial for all the bravest and best in the land". Bards called it "the land of indulgences, absolution and pardon, the road to Heaven, and the gate to Paradise", and in the spiritual accountancuy of the Middle Ages three pilgrimages to Bardsey were considered to be of equivalent benefit to the soul as one to Rome.[12] In 1188 the abbey was still an instuttution of the old Welsh ecclesiastical structure, but by 1212 it belonged to the Augustinians.[5]

Many people still walk the journey to Aberdaron and Uwchmynydd each year in the footsteps of the pilgrims, though today only ruins of the old abbey's 13th century bell tower remain.[5] A Celtic cross amidst the ruins commemorates the 20,000 saints reputed to be buried on the island.[13]

Saint Deiniol, the bishop of Bangor, was buried on the island in 584.[14] Saint Dyfrig or Dubricius was also buried on Bardsey, although in 1120 his remains were transferred to Llandaff.

A gnarled and twisted apple tree, growing by the side of Plas Bach, is believed to be the only survivor of an orchard that was tended by the monks who lived there a thousand years ago. In 1998, experts on the varieties of British apples at the National Fruit Collection in Brogdale stated that they believed the strain, the Bardsey Apple, to be the only one in the world. Cuttings from the tree have been planted so that they can be sold to raise funds for the Bardsey Island Trust.

The Dissolution of the Lesser Monasteries Act of 1536, passed under King Henry VIII, dissolved St Mary's Abbey its buildings were demolished in 1537.[6] The choir stalls, two screens and the bells were transferred to Llanengan, where the parish church was then being built.[11]

For many years Bardsey Island formed part of the Newborough Estate, and between 1870 and 1875 the island's farms were rebuilt; a small limestone quarry was opened, and a lime kiln constructed.[15] Carreg and Plas Bach are separate buildings, but the remaining eight were built as semi-detached houses, each pair with out buildings set around a shared yard. The buildings are Grade II listed and, in 2008, Cadw approved a grant of £15,000 to cover the first phase of repairs.[16] Only one of the original croglofft cottages, Carreg Bach, survives.[17]

Given the choice of a harbour or a new church, in 1875 the islanders asked the estate to provide a place of worship; a Methodist chapel was built.[2]

Bardsey Island Trust (Welsh: Ymddiriedolaeth Ynys Enlli) bought the island in 1979,[2] after an appeal supported by the Church in Wales and many Welsh academics and public figures.

The trust is financed through membership subscriptions, grants and donations, and is dedicated to protecting the wildlife, buildings and archaeological sites of the island; promoting its artistic and cultural life; and encouraging people to visit as a place of natural beauty and pilgrimage.[20] When, in 2000, the trust advertised for a tenant for the 440-acre sheep farm on the island, they had 1,100 applications.[21] The tenancy is now held by the Royal Society for the Protection of Birds;[22] and the land is managed to maintain the natural habitat. Oats, turnips and swedes are grown; goats, ducks, geese and chickens kept; and there is a mixed flock of sheep and Welsh black cattle.[23]

Bardsey Lighthouse stands on the southerly tip of the island and guides vessels passing through St George's Channel and the Irish Sea. It is the only square lighthouse maintained by Trinity House.

Joseph Nelson was the engineer and builder, but the heavy weathered string-course near the base and the blocked and hooded directional-light window show the influence of Daniel Alexander, who succeeded Samuel Wyatt as architect to Trinity House, and under whom Nelson served.[24] Joseph Nelson is associated with the design of at least fifteen lighthouses, mostly in the Bristol Channel.[24]

The Lighthouse is built of ashlar limestone and is unplastered inside and out, but painted in red and white bands on the outside.[24] The Lighthouse tower is 98 feet high and is unusual, amongst Trinity House towers of this period in being square in plan. Unlike many other lighthouses, it retains its original gallery railings, which are of iron and bellied (i.e. curved out in width at their crowns) towards the top.[24] Other examples include Salt Island Lighthouse, at Holyhead, designed by John Rennie in the same year. Fortunately, the present lantern, fitted in 1856, did not require the removal of the original railings.[24]

Originally, the light comprised reflectors but changed to a dioptric (refracting) mechanism in 1838; the appearance of the original lantern is not known. The lantern of 1856 is a 14-foot wide chamfered octagon and the revolving apparatus was installed in 1873 and gives a group of five flashes.[24]

In 1987 the Lighthouse was converted to automatic operation and it is now monitored from the Trinity House Depot at Harwich.[25].

Y Storws, sometimes referred to as "The Boathouse", was built a few years before the lighthouse, near to the landing place at Y Cafn.[15]

Bardsey was declared a National Nature Reserve in 1986,[26] and is part of Glannau Aberdaron ac Ynys Enlli Special Protection Area. It is now a favourite bird-watching location, on the migration routes of thousands of birds. The Bardsey Bird and Field Observatory founded in 1953, nets and rings 8,000 birds each year in order to understand their migration patterns.[7] 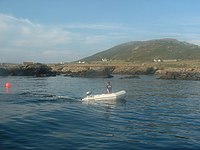 It was tradition for the island to elect the "King of Bardsey" (Welsh: Brenin Enlli), and from 1826 onwards,[27] he would be crowned by Baron Newborough or his representative.[28] The crown is now kept at Merseyside Maritime Museum in Liverpool, although calls have been made for its return to Caernarfonshire.[29] The first known title holder was John Williams; his son, John Williams II, the third of the recorded kings, was deposed in 1900, and asked to leave the island as he had become an alcoholic.[27] At the outbreak of First World War, the last king, Love Pritchard, offered himself and the men of Bardsey Island for military service, but he was refused as he was considered too old at the age of 71. Pritchard took umbrage, and declared the island a neutral power.[28] In 1925 Pritchard left the island for the mainland, to seek a less laborious way of life, but died the following year.[30]

Yorkshire born poet, Christine Evans, lives half the year on Bardsey Island, spending the winters at Uwchmynydd. She moved to Pwllheli as a teacher, and married into a Bardsey Island farming family. While on maternity leave in 1976, she started writing poems, and her first book was published seven years later. Cometary Phrases was Welsh Book of the Year 1989 and she was the winner of the inaugural Roland Mathias Prize in 2005.[31]

Edgar Ewart Pritchard, an amateur film-maker from Brownhills, produced "The Island in the Current", a colour movie of life on Bardsey Island, in 1953. A copy of the film is held by the National Screen and Sound Archive of Wales.[32]

Opera singer Bryn Terfel, a patron of the Bardsey Island Trust, has performed in the island's chapel;[10] and triple harpist Llio Rhydderch in 2002 released Enlli, an album inspired by the spiritual emotions evoked on the pilgrimages.[33]

Dilys Cadwaladr, the former school teacher on the island, in 1953 became the first woman to win the Crown at the National Eisteddfod, for her long poem Y Llen; and artist Brenda Chamberlain twice won the Gold Medal for Art at the Eisteddfod; in 1951 for Girl with Siamese Cat, and in 1953 with The Christin Children.[34] Some of the murals she painted can still be seen on the walls of Carreg, her home from 1947 to 1962. Wildlife artist Kim Atkinson, whose work has been widely exhibited throughout Britain, spent her childhood on the island and returned to live there in the 1980s.[8]

Since 1999, Bardsey Island Trust has appointed an Artist in Residence to spend several weeks on the island producing work which is later exhibited on the mainland. A Welsh language|Welsh literary residence was created in 2002; singer-songwriter Fflur Dafydd spent six weeks working on a collection of poetry and prose.[8] Her play Hugo was inspired by her stay, and she has produced two novels, Atyniad" ("Attraction"), which won the prose medal at the 2006 Eisteddfod; and Twenty Thousand Saints, winner of the Oxfam Hay Prize, which tells how the women of the island, starved of men, turn to each other.[9]

In 2009 Cowbois Rhos Botwnnog became the first electric rock group to play on the island, as part of S4C's "Bandit" series.

Ferry services to Bardsey Island are somewhat more sophisticated than the small, overladen, open boats in which fishermen once bore pilgrims to the isle. Comfortable boats today sail from Porth Meudwy and Pwllheli.

At times, the wind and the fierce sea currents make sailing between the island and the mainland impossible. Sometimes boats are unable to reach or leave Bardsey Island for weeks, and in 2000 seventeen island visitors became stranded for two weeks when gales prevented a boat going to rescue them.[4]