Criccieth is a town in Caernarfonshire, standing overlooking Cardigan Bay. It is a seaside resort but it is most famous as the site of Criccieth Castle, whose ruins stand prominently on the headland.

The town lies 5 miles west of Porthmadog, 9 miles east of Pwllheli and 17 miles south of the county town, Caernarfon. It had a population of 1,826 at the 2001 census.

Attractions in the town include the ruins of Criccieth Castle, and form the castle extensive views over the town and surrounding countryside.[1] Nearby on Ffordd Castell is "Cadwalader's Ice Cream Parlour", opened in 1927,[2] whilst Stryd Fawr has several bistro style restaurants.

In the centre lies Y Maes, part of the original mediæval town common.[3]

The town is noted for its fairs, held on 23 May and 29 June every year, when large numbers of people visit the fairground itself and the market which spreads through many of the streets of the town.[4]

Famous people associated with the town include the British prime minister, David Lloyd George, who grew up in the nearby village of Llanystumdwy, and poet William George.[5] and several other well-known characters.

The town styles itself The Pearl of Wales on the Shores of Snowdonia.[8]

The earliest recorded form of the place name "Criccieth" in Welsh is found in Brut y Tywysogion where reference is made to the imprisonment of Gruffudd ap Llywelyn in the 'castle of Cruceith' (Middle Welsh orthography: Kastell Krukeith).[9] The form Cruciaith was used by Iolo Goch in a famous 14th century poem addressed to Sir Hywel y Fwyall, custodian of the castle.[10]

There are a number of theories as to the meaning, but the most popular is that it comes from Crug Caeth, in which caeth may mean "prisoner" and thus the name could mean "prisoner's rock", a reference to the imprisonment in the castle of one of the sons of Llywelyn ab Iorwerth, by Llywelyn's own brother.[11] However, caeth has the primary meaning in Middle Welsh of "serf[s]"[12] and the name could refer to a bond community nearby. In later mediæval times the settlement was also known as Treferthyr ("Martyr's town"), probably a reference to St Catherine, after whom the parish church is named.[11]

The spelling of Criccieth remains controversial today. Some regard this version as an anglicism, arguing that the Welsh form Cricieth should be used instead. Others argue that "Criccieth" is simply an anomaly in the Welsh language, in which there is no double-C, and that the spelling should be preserved. This petty dispute has resulted in the vandalising of road signs at the entrance to the town.[13] 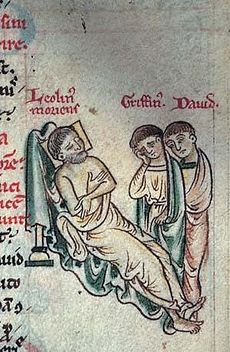 Llywelyn the Great wiith his sons

The area around Criccieth was settled during the Bronze Age, and a chambered tomb, Cae Dyni, survives on the coast to the east of the town; it consists of seven upright stones, and there are 13 cup marks, arranged in several groups.[14] Evidence from other sites on the Llŷn peninsula suggests that the area was colonised by a wave of Iron Age settlers probably around the 4th century BC. Ptolemy calls the peninsula Ganganorum Promontorium ("Peninsula of the Gangani"), suggesting the name of the local tribe.

Around 1230, Llywelyn ab Iorwerth, known as Llywelyn the Great, built Criccieth Castle. He had controlled the area since 1202. The first record of the building though was in 1239, when the administrative centre of Eifionydd was moved from Dolbenmaen.[15] On Llywelyn's death in 1240, a struggle ensured between Llywelyn's son; his legitimate son Dafydd who was the named heir, and his bastard son Gruffydd who might have gathered support against his half-English half-brother. Gruffydd was held prisoner in Criccieth Castle, until he was handed over to Henry III of England in 1241, and moved to the Tower of London.[16]

Dafydd ap Llywelyn died in 1246 without leaving an heir, and was succeeded by his nephew Llywelyn ap Gruffydd, known as Llywelyn the Last. Llywelyn was defeated by King Edward I and stripped him of much of his territory.[17] A rebellion sparked by Dafydd, Llywelyn's younger brother, resulted in the final defeat and dissolution of ancient Gwynedd; Llywelyn was slain in battle at Cilmeri,[18] and Criccieth became one of King Edward's strongholds. 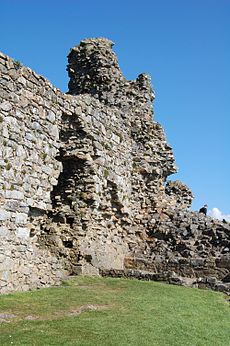 Edward extended and reshaped Criccieth to serve as one of the castles of his "Iron Ring" around the newly conquered territories. A township developed to support the garrison and a charter was granted in 1284; the charter was intended to create a plantation of English burgesses who would provide food for the soldiers from the arable land behind the Dinas and the grazings on the slopes beyond.[15] Weekly markets were held on Thursdays and there were annual fairs on 25 April and 18 October, the evangelical feasts of Saint Mark and Saint Luke.[3][19]

In 1294, Madog ap Llywelyn led a national revolt against the English and Criccieth was besieged for several months over the winter; 41 residents sought refuge within its walls, joining the garrison of 29 men under William de Leybourne, until supplies were brought in from Ireland the following April. The following year, the castle was again used as a prison, housing captives taken in Edward's wars in Scotland.[20]

In 1337 three Welshmen who had settled in the borough were expelled as it was meant to be reserved for Englishmen, but times were about to change. Hywel ap Gruffudd was appointed constable of the castle in 1359, the first Welshman to hold the post. The following year he became mayor of the town, holding the office for twenty years; in a poem of praise, Iolo Goch described him as "a puissant knight, head of a garrison guarding the land".[19] By 1374 eight jurymen from the borough had Welsh names.[11] 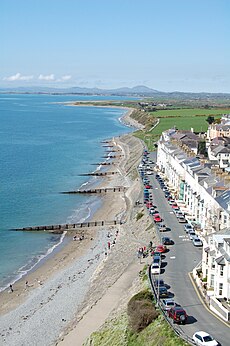 After Henry of Lancaster deposed King Richard II, Wales and Chester resisted the new king; in 1400 serious civil unrest broke out in Chester, and 16 September 1400, Owain Glyndŵr, a descendant of the Princes of Powys and outlawed as a traitor, launched a revolt. Although the garrison at Criccieth had been reinforced, a French fleet blockaded supplies and the castle fell to Glyndŵr in the spring of 1404. The castle was sacked; its walls were torn down; and both the castle and borough were burned. The castle was never to be reoccupied, while the town was to become a small Welsh village, no longer involved in affairs of state.[20]

The town expanded in the 19th century with the coming of new transportation links. In 1807 a turnpike road was built from Tremadog to Porthdinllaen, which was intended to be the main port for traffic to Ireland; and with the construction of the Aberystwyth and Welsh Coast Railway in 1868, the town began to develop as a Victorian seaside resort.[15]

Criccieth solicitor David Lloyd George was elected as Liberal Member of Parliament for the Caernarfon Boroughs in 1890. He was to hold the seat for 55 years, and served as Prime Minister from 1916 to 1922. His position as a leading statesman was to bring Criccieth back into national, and international, prominence; the town still has many locations connected with Lloyd George and his family.[21]

Disaster struck Criccieth in October 1927; a great storm in the Irish Sea stopped the tidal flow, causing a double high tide. High seas and strong on-shore winds destroyed houses at Abermarchnad, the pressure of the waves punching holes through the back walls; the houses subsequently had to be demolished and the occupants rehoused.[22] 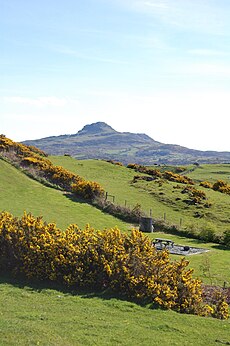 Criccieth is on Cardigan Bay, on the edge of the Llŷn peninsula. The town faces south and is built around the rocky outcrop containing Criccieth Castle, which effectively divides the shoreline in two at this point. The East Shore has a sandy beach with a shallow area for bathing, whilst the Marine Beach, to the west, is quieter and has a number of hotels and guest houses.[23]

The rhyolitic headland on which the castle is built is strong and not easily eroded. The cliffs to each side, however, are less resistant, being made up of glacial drift, layers of boulders, stones, clay and silt which were laid down during the last ice age. Sea walls were already in existence at the time of the first Ordnance Survey map in 1891, and the west shore sea wall had been extended and groynes built by 1913. Extensive remedial work was completed in 1965, and the defences were again strengthened in 1974 and 1985. In 1995 work was started on improving the defences along The Esplanade, followed in 1997 by further work to replace the crumbling gabions below Lôn Felin.[24] Submerged forests occur in a number of places off the Cardigan Bay coastline, including Criccieth; these are deposits of peat, soil and tree remains, and appear to be post-glacial coastal lagoons and estuaries, which have been flooded by rising sea levels.[25]

The town has a temperate maritime climate which is influenced by the Gulf Stream and frost and snow are rare. The climate results in a luscious, green countryside and many delicate plant species grow wild; gorse flowers throughout the year.[26] One plant unusual to Criccieth is lampranthus roseus, known locally as the Oxenbould Daisy and introduced in the late 19th century by a resident of Min-y-Mor.[27]

In the 16th century, at the bottom of Lôn Felin stood the town's mill, powered by water from a millpond near to the present level crossing and fed from the Afon Cwrt.[3]

The herring industry was important by the 19th century, with horsedrawn carts converging on Abermarchnad to transport the catch to neighbouring villages. There was also a coal yard and other storehouses by the quay, where the Afon Cwrt enters the sea. Opposite stood a lime kiln, with lime produced both for local use and export, limestone for the kiln being unloaded from ships on the quay.[3]