Caerhun is a village and parish on the west bank of the River Conwy, to the south of Henryd and to the north of Dolgarrog. 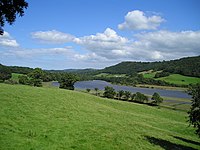 The River Conwy from the churchyard

Surrounding the 14th-century parish church of St Mary are the banks of the Roman fort of Canovium. The excavations of the Roman site were directed by PK Baillie Reynolds, of Aberystwyth University, over a period of four summers in the 1920s,[1][2] although there have of course been several other publications since.[2]

The church and its churchyard occupy the north-east quarter of the original Roman site. Canovium was built at an ancient river crossing and was an important post on the Roman road and ancient drovers' road by way of Bwlch-y-Ddeufaen to Abergwyngregyn and the Menai Strait. Latterly the best crossing point, now with a bridge, has been at nearby Tal-y-Cafn.

After the Romans retreated from Britain, the fort was associated with King Rhun Hir of Gwynedd, hence the subsequent name.