Holy Island is an island of 15¼ square miles lying to the west of the larger Isle of Anglesey, from which it is separated by a narrow, winding channel but to which it is joined by a broad causeway and a bridge, bearing two roads and the railway line. It is part of the County of Anglesey.

The island’s main town is Holyhead, the major container port and passenger port for sailings to and from Ireland. From Holyhead, passenger ferries sail to Dún Laoghaire and Dublin and freight ships to Dublin.

The historic name of the island is Holyhead Island, and the name "Holy island" may be a formation from that name or simply refer to its days as the site of St Cybi's monastery. In Welsh the island is named Ynys Gybi, meaning "Cybi’s island", after St Cybi to whom the ancient church in Holyhead is dedicated. Holyhead is known in Welsh as Caergybi.

Holy Island rose from obscurity to the prominence it still holds as a direct result of the Union between Great Britain and Ireland in 1801. Irish Members of Parliament required a safe port for their journeys between Dublin and London and Holyhead was the closest port. After Telford bridged the menai Strait, Holyhead swiftly became the major port between Dublin and Great Britain, and has grown into one of Britain's busiest harbours since then, transformning Holy Island.

There are a variety of natural habitats on Anglesey including mudflats, dunes, marshes, and beaches.[1] The western side of the island is taken up mainly by Holyhead Mountain, an area of maritime heather moor, which is the highest peak in the county at 722 feet (220m). 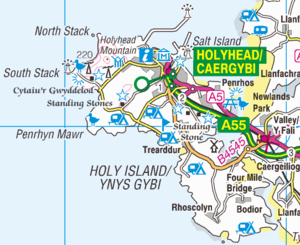 Holy Island is connected to Anglesey by two road links. The first is made up of causeways carrying the A5/A55 road and the main railway line to Chester and London, and the original bridge of the A5 post road. The second is Four Mile Bridge which carries a 'B' road and is much smaller.

Some 30 miles of the 125-mile Anglesey Coastal Path is on Holy Island.

Peripheral islands and stacks include North Stack, and South Stack, with its famous lighthouse. Before and even after the construction of lighthouses, the cliffs and jagged rocks of the island were a great danger to sailors. A number of wreck sites are to be found around these treacherous coasts.