Beddgelert is a tiny village in Caernarfonshire, an utterly delightful spot within Snowdonia, begirt with mountains and mountain rivers. Its name can be translated "Gelert's grave" and it is reputed to be named after the legendary hound Gelert. The village lies mostly to the west of the River Glaslyn, which forms the border with Merionethshire.

The legend of Gelert 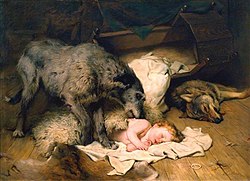 Outside the village across the fields is a raised mound called Gelert's Grave, which is now a tourist attraction, a walk to which gives a fine airing to the lungs.

It is said that Gellert was the prize hound of Prince Llywelyn. Llywelyn returned from hunting to find his baby's cradle overturned, the baby missing and the dog with blood around its mouth. Imagining that it has savaged the child, Llywelyn draws his sword and kills the dog, which lets out a final dying yelp. He then hears the cries of the baby and finds it unharmed under the cradle, along with a dead wolf which had attacked the child and been killed by Gelert to protect his master's son. Llywelyn is then overcome with remorse and he buries the dog with great ceremony, yet can still hear the dying yelp. After that day Llywelyn never smiles again.

The legend produced a poem "Beth Gêlert; or, the Grave of the Greyhound" by William Robert Spencer written around 1800, "Beth Gelert" by Richard Henry Horne, "Gelert" by Francis Orray Ticknor and the dramatic poem "Llewellyn" by Walter Richard Cassels. John Critchley Prince in his poem "North Wales" alludes to it, and George Borrow in Wild Wales notes that it is a well known legend. It has also inspired Pre-Raphaelite painters.

Alas, there is no evidence for Gelert's existence. The grave mound is ascribed to the activities of a late 18th-century landlord of the Goat Hotel in Beddgelert, David Pritchard, who connected the legend to the village in order to encourage tourism. Similar legends can be found in other parts of Europe and Asia.[1]

An alternative theory is that village is named after an early Christian missionary and leader called Celert or Cilert who may have settled here early in the 8th century. The earliest record of the name Beddgelert appears on a document dated 1258, and the name recorded is "Bekelert". In a document of 1269 it is recorded as "Bedkelerd".[2] 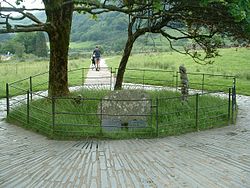 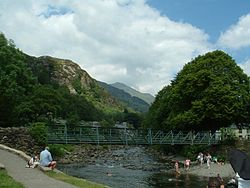 Nevertheless, the grave remains an important site for the townand its visitors. It is marked with two slate memorials, one in Welsh and the other in English. The latter reads:

GELERT'S GRAVE
IN THE 13TH CENTURY, LLYWELYN, PRINCE OF NORTH WALES, HAD A PALACE AT BEDDGELERT. ONE DAY HE WENT HUNTING WITHOUT GELERT "THE FAITHFUL HOUND" WHO WAS UNACCOUNTABLY ABSENT. ON LLYWELYN'S RETURN, THE TRUANT STAINED AND SMEARED WITH BLOOD, JOYFULLY SPRANG TO MEET HIS MASTER. THE PRINCE ALARMED HASTENED TO FIND HIS SON, AND SAW THE INFANT'S COT EMPTY, THE BEDCLOTHES AND FLOOR COVERED WITH BLOOD. THE FRANTIC FATHER PLUNGED THE SWORD INTO THE HOUND'S SIDE THINKING IT HAD KILLED HIS HEIR. THE DOG'S DYING YELL WAS ANSWERED BY A CHILD'S CRY. LLYWELYN SEARCHED AND DISCOVERED HIS BOY UNHARMED BUT NEAR BY LAY THE BODY OF A MIGHTY WOLF WHICH GELERT HAD SLAIN, THE PRINCE FILLED WITH REMORSE IS SAID NEVER TO HAVE SMILED AGAIN. HE BURIED GELERT HERE. THE SPOT IS CALLED BEDDGELERT. 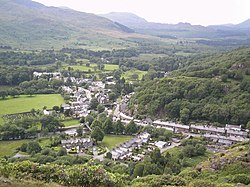 The village from Mynydd Sygun

Beddgelert is a significant tourist attraction, its picturesque bridge crossing the River Colwyn just upstream of its confluence with the River Glaslyn. It is also the nearest village to the scenic Glaslyn gorge, an area of tumultuous river running between steep wooded hills.

Much of the area is however becoming choked by rhododendrons, which provide a covering of pretty pink blossom in May and June, but which are slowly blanketing out the native plants. Local volunteers are fighting back to control the alien plants.

Beddgelert has a range of hotels and guesthouses, cafés, restaurants and pubs. The car park in the village provides the easiest access route for climbing Moel Hebog, the mountain which directly overlooks the village.

The Welsh Highland Railway is currently rebuilding the former railway line, and in April 2009 reopened the railway station to the public, linking the village with Caernarfon to the north and Porthmadog to the south.

Other local attractions include the Sygun Copper Mine.

The village is also linked with the Rupert Bear stories, as Alfred Bestall wrote and illustrated some of the stories whilst he lived in the village, in a cottage at the foot of Mynydd Sygun.

Renowned bards who lived in the area in the 15th–16th centuries include Dafydd Nanmor, Rhys Nanmor and Rhys Goch Eryri. More recently in the 19th through to the 20th centuries both Glaslyn & Carneddog lived in Nantmor. Currently Nantmor is still home to poets, including Nia Powell and Cynan Jones.