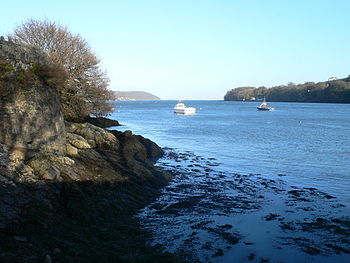 The Menai Strait from the Anglesey shore

The Menai Strait (Welsh: Afon Menai) is a narrow stretch of shallow by strongly tidal water about 15 miles long, which separates the island of Anglesey from Caernarfonshire and the mainland of Great Britain. The shoreline of Caernarfonshire on the strait is known as Arfon, which means "by Anglesey", from Môn, the Welsh name for the island.

The strait varies in width from 440 yards from Fort Belan to Abermenai Point to 1,200 yards from Traeth Gwyllt to Caernarfon Castle. It then narrows to about 550 yards in the middle reaches (Port Dinorwic and Menai Bridge) and then it broadens again. At Bangor Pier it is 1,000 yards wide. It then widens out, and the distance from Puffin Island to Penmaenmawr is just under five miles across.

The differential tides at the two ends of the strait cause very strong currents to flow in both directions through the strait at different times, creating dangerous conditions. One of the most dangerous areas of the strait is known as the Swellies (or Swillies – Welsh Pwll Ceris) between the two bridges. Here rocks near the surface cause over-falls and local whirlpools, which can be of considerable danger in themselves and cause small boats to founder on the rocks. This caused the loss of the training ship HMS Conway in 1953.

Entering the strait at the Caernarfon end is also hazardous because of the frequently shifting sand banks that make up Caernarfon bar. On the mainland side at this point is Fort Belan, an 18th-century defensive fort built in the times of the American War of Independence.

In the midst of the strait, between its two bridges, there is a small island, Ynys Gorad Goch, on which are built a house and outbuildings and around which are the significant remains of fish traps, no longer used. 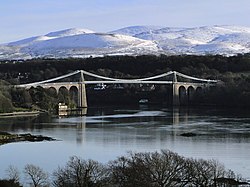 The strait is bridged in two places. The main A5 road is carried over the strait by Thomas Telford's elegant iron suspension bridge, the first of its kind, opened in January 1826, and adjacent to it the Britannia Bridge. The original Britannia Bridge was built by Robert Stephenson in 1850 and carried rail traffic in two wrought-iron rectangular box spans, but after a disastrous fire in 1970, which left only the limestone pillars remaining, it was rebuilt as a steel box girder bridge, and now carries both rail and road traffic.

The present day channel is a result of erosion by successive ice-sheets during the series of Pleistocene glaciations. Ice moved from north-east to south-west across Anglesey and neighbouring Arfon, the coast of Caernarfonshire, scouring the bedrock, the grain of which also runs in this direction. The result was a series of linear bedrock hollows across the region, the deepest of which was flooded by the sea as world ocean levels rose at the end of the last ice age. 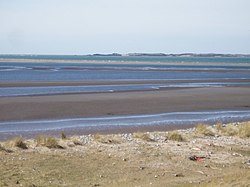 Sandbanks on the Caernarfon Bar

The tidal effects observed along the banks of the strait can also be confusing even to a seasoned sailor. A rising tide approaches from the south-west, causing the water in the strait to flow north-eastwards as the level rises. The tide also flows around Anglesey until, after a few hours, it starts to flow into the strait in the opposite direction, south-westerly from Beaumaris. By the time this happens the tidal flow from the Caernarfon end is weakening and the tide continues to rise in height but the direction of tidal flow is reversed. A similar sequence is seen in reverse on a falling tide. This means that slack water between the bridges tends to occur approximately one hour before high tide or low tide.

Theoretically it is possible to ford the strait in the Swellies at low water, spring tides when the depth may fall to less than 2 feet. However, at these times a strong current of around 6 knots is running, making the passage extremely difficult.

Elsewhere in the strait the minimum depth is never less than six feet until the great sand flats at Lavan sands are reached beyond Bangor.

Because the strait has such unusual tidal conditions, coupled with very low wave heights because of its sheltered position, it presents a unique and diverse benthic ecology.

The depth of the channel reaches 50 feet in places, and the current can exceed 7 knots. It is very rich in sponges.

The existence of this unique ecology was a major factor in the establishment of the School of Ocean Sciences at Menai Bridge as well as its status as a Special Area of Conservation with marine components.[1]

The same unique ecology and geomorphology has let to a number of designations of Sites of Special Scientific Interest along the strait including Glannau Porthaethwy‎, the ivy, oak and ash woodland on the southern shore (Coedydd Afon Menai) and Lavan Sands (Traeth Lafan).

Much of the land on Anglesey at the eastern end of the strait is designated as an Area of Outstanding Natural Beauty.

Places on the Strait

According to Heimskringla, the 11th-century Norse-Gael ruler Margad Ragnaldson, known in Irish as Echmarcach mac Ragnaill, plundered in Wales with his friend, the Viking Guttorm Gunnhildsson. However they started quarrelling over the plunder and fought a battle at Menai Strait. Guttorm won the battle by praying to Saint Olaf and Margad was slain.

In the 12th century, a later Viking raid and battle in the Menai Strait are recounted in the Orkneyinga Saga as playing an important role in the life of Magnus Erlendsson, Earl of Orkney; the future Saint Magnus. He had a reputation for piety and gentleness, and refusing to fight in the raid on Anglesey stayed on board his ship, singing psalms. This incident is recounted at length in the 1973 novel Magnus by Orcadian author George Mackay Brown, and in the 1977 opera, The Martyrdom of St Magnus by Peter Maxwell Davies. The first of the opera's nine parts is called "The Battle of Menai Strait".

Magnus Barefoot, King of Norway, fought in the Menai Strait too, and conquered Anglesey, according to his saga.