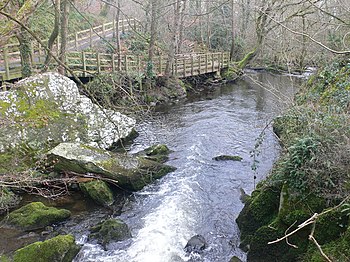 River Cefni in the Dingle, Llangefni

The River Cefni is the major river of the island of Anglesey, 11 miles long through the heart of the island and reaching the sea at Malltraeth Sands.

The source of the Cefni is Llyn Cefni, a large lake in the centre of the island. From the lake, the waters of the river flow south through the Dingle, a wooded hollow, and enters the town of Llangefni, which takes its name from the river. Just north of the A55, the river turns and flows south-west.

The river passes through the broad flatlands of the Malltraeth Marshes, through which it runs for several miles. Its course on the marshes was regularised and canalised in 1824. Halfway through this strecth, at Glanarfon Farm, the river beomes tidal. Its waters pass under a bridge carrying the North Wales Coast Railway Line and soon it reaches the village of Malltraeth in the south-west of the island, where it enters a great bulging estuary which, flowing through the Malltraeth Sands, submerged at high tide, into the Irish Sea.

In February 2007 one of the most bizarre moments in the river's history took place. A local cheese-making company was fined £4,000 and ordered to pay £1,585 in costs after some 22 gallons of cream were discharged into the River Cefni from their surface water drainage system. In August 2007 toxic algae were found in a stretch of the river flowing through the Dingle near Llangefni. 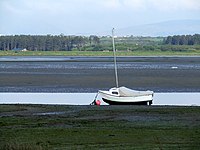