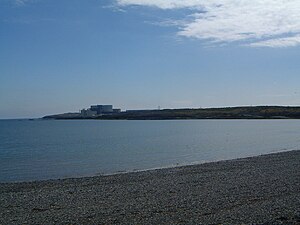 Cemlyn Bay is a bay on the northwest coast of Anglesey, approximately 1½ miles west of Wylfa nuclear power station, within the parish of Llanfairynghornwy.

Cemlyn Lagoon is separated from the bay by a shingle beach; a brackish lagoon, which is fed by a number of small streams. A weir at the western (Bryn Aber) end of the beach regulates the lagoon's water level.

The site was designated a Site of Special Scientific Interest in 1958, and is currently part of the Anglesey Heritage Coast and the Isle of Anglesey Area of Outstanding Natural Beauty. The Cemlyn estate is owned by the National Trust

The lagoon and its immediate surrounds comprise Cemlyn Nature Reserve, set up in 1971 and leased by the North Wales Wildlife Trust. The Anglesey Coastal Path passes through it.

On islands at the western end of the lagoon, there is an important tern colony, with the only breeding Sandwich Terns at this end of Britain. The numbers of breeding Sandwich Terns have increased to around 1,500 pairs in recent years, making Cemlyn the third-largest colony in the United Kingdom. Arctic and Common Terns breed here regularly in smaller numbers but Roseate Tern now only occasionally. For this reason Cemlyn has been designated as part of the Ynys Feurig, Cemlyn Bay and The Skerries Special Protection Area along with two other nearby sites, Ynys Feurig and The Skerries, and all three are also classed by Birdlife International as an Important Bird Area. Birds interchange regularly between all three sites, and form part of a larger Irish Sea tern population together with birds at sites in Ireland such as Rockabill Island. The tern colony is wardened from May to August.

Other breeding birds found at Cemlyn include Black-headed Gull, Ringed Plover, Oystercatcher and Shelduck. The site is locally important for wintering wildfowl, with Wigeon, Shoveler and Teal.

Cemlyn has attracted a number of vagrant birds. It is most famous among twitchers as the site where a Bridled Tern spent several weeks in July 1988, and where the similarly rare (in a British context) Sooty Tern was present on and off in July 2005. Both species had at these times been seen by only a very small number of birders in Britain. Also at Cemlyn in 2005 were an American Golden Plover in May and a Terek Sandpiper in June. In 1998, an Isabelline Shrike was present for most of the month of July.