Newborough is a village in the south-western corner of the Isle of Anglesey, in the Menai Hundred.

The village with its attractive environs provides the visitor with excellent walking opportunities, not least at Newborough Warren, one of the largest areas of sand dunes found in the British Isles. Superb walking is also available at nearby Newborough Forest, a 2,000-acre woodland, dedicated to forestry and conservation. Much of the area around Newborough has been declared a nature reserve, making it popular for those interested in birds and other wildlife.

There is an expansive sandy Blue Flag beach at Llanddwyn, which provides access to Llanddwyn Island, a mile-long rocky promontory. The remains of the 16th-century church of Dwynwen, the Welsh patron saint of lovers, is located on the island.

Newborough beach is very popular as a kitesurfing location.

Just outside the village, on the B4419 towards Llangaffo, is Tacla Taid, the Anglesey Transport and Agriculture Museum. On the A4080, towards Dwyran, there is a chance to view all of Anglesey's major attractions in miniature, at Anglesey Model Village, which includes garden and a ride-on train for children.

Low property prices, a blue-flag beach, and the village now having high-speed internet access, is giving the village a resurgence with an influx of people working from home.

Newborough (formerly Rhosyr) was a centre of a commote of mediæval Anglesey. The ruined court buildings of Llys Rhosyr lie on the outskirts of the present village.

Debate surrounds the former use of the Rhosyr site; archaeologists at the local Archaeological Trust consider it to have been a royal home and have established an exhibition in the Pritchard Jones Institute in the village on their findings.

Newborough was founded by Edward I in 1294, to house the folk he evicted from Llanfaes in order to build Beaumaris Castle. It was, literally, established as a 'new borough' and gained its charter in 1303. In the 16th century, Newborough served as the county town of Anglesey and was once home to a thriving Marram grass industry, used for producing matting, nets and rope.

John Morgan, a blind musician living around 1740, played the crwth in the village. Newborough is the home of the Prichard Jones Institute, considered an exceptional example of an early 20th century public institution. The Institute and the six single-storey cottage homes that accompany it were a gift to the village by Sir John Prichard-Jones, who was born in Newborough. Sir John served an apprenticeship as a draper, eventually rising to become chairman of the Dickins & Jones department store in London, to which he gave his name. The Institute was designed by Roland Lloyd Jones and completed in 1905 at a cost of £20,000. The neo-Tudor style two-storey building, complete with clock tower, is an unusually lofty design for a location often buffeted by strong south-westerly winds. The Institute appeared on the BBC2 programme, Restoration, in 2006. 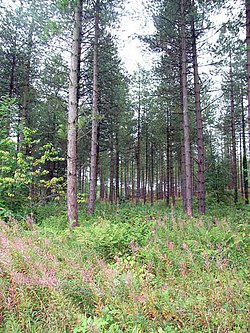 The Warren has large expanses of both active and fixed dunes, although many of the latter have been afforested, along with a freshwater lake, salt marsh and mudflats and a tidal island. The reserve contains an outstanding flora, interesting lichen and moss communities and a wealth of invertebrates. The inter-tidal mudflats and saltmarshes are important wintering grounds for waders and wildfowl regularly supporting over one per cent of the British population of pintails. Ynys yr Adar, near Llanddwyn Island, supports over one per cent of the British breeding population of cormorants.

At the extreme southern tip of the Warren is Abermenai Point, the location of probably the earliest ferry crossing over the Menai Strait to the mainland.

In the fourteenth century a series of extremely violent storms buried a large portion of Newborough and there were fears that the whole borough might be lost to the sands, so Queen Elizabeth I enacted a law protecting the Marram grass, the roots of which help to stabilise the dunes. This stopped the advance of the dunes and also provided raw material for a new industry in the town, the weaving of the Marram grass leaves to form mats.

Rabbits soon colonised the dunes, giving the area the name Newborough Warren, and they in turn became another valuable resource for the townsfolk; over 100,000 rabbits a year were taken from the warren.

Afforestation of the shifting sands on the north side of the Warren began in 1947, partly to protect the village. Artificial dunes were created and the area planted with Corsican and Scots pine. During the late 1970s and '80s and mid '90s there were concerns that the water levels within the Forest and within neighbouring Warren were falling due to a greater potential evaporation demand caused by afforestation, with the result that winter flooding was not to the same depth and that dune slack pools were drying out sooner; to address these concerns clearings have been created in the forest, and the forest bordering the warren was heavily thinned. Proposals to remove large parts of the forest have been met by local objections. 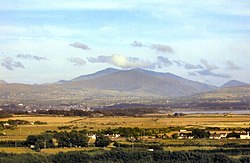