The Britannia Bridge crosses the Menai Strait between the island of Anglesey and Caernarfonshire on the mainland. It was originally designed and built by Robert Stephenson as a tubular bridge of wrought iron rectangular box-section spans for carrying rail traffic. Following its destruction by fire in 1970, the bridge was rebuilt as a two-tier steel truss arch bridge, carrying both road and rail traffic. 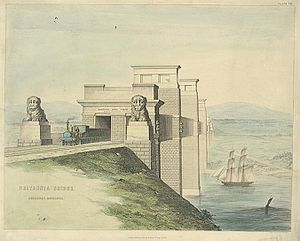 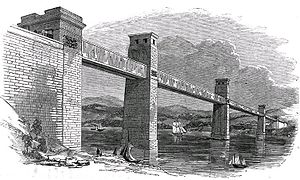 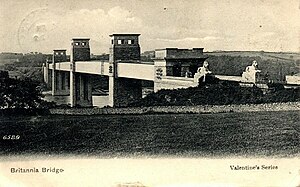 Postcard picture of the bridge from circa 1902[1]

The opening of the Menai Bridge in 1826, a mile to the east of where Britannia Bridge was later built, provided the first fixed road link between Anglesey and the mainland. The increasing popularity of rail travel necessitated a second bridge to provide a direct rail link between London and the port of Holyhead, the Chester and Holyhead Railway.

Other railway schemes were proposed, including one in 1838 to cross Thomas Telford's existing Menai Bridge. Railway pioneer George Stephenson was invited to comment on this proposal but stated his concern about re-using the suspension bridge. By 1840, a Treasury committee decided broadly in favour of Stephenson's proposals, with final consent to the route including Britannia Bridge given in 1845. Stephenson's son Robert was appointed as chief engineer.

The design required the strait to remain accessible to shipping and the bridge to be sufficiently stiff to support the heavy loading associated with trains, so Stephenson constructed a bridge with two main spans of 460-foot long rectangular iron tubes, each weighing 1,500 tons,[2] supported by masonry piers, the centre one of which was built on the Britannia Rock. Two additional spans 230 feet in length completed the bridge making a continuous girder 1,511 feet long. The trains were to run inside the tubes. Up until then the longest wrought iron span had been 31 feet 6 inches.

Stephenson retained the services of two distinguished engineers as consultants. William Fairbairn was an old friend of his father. Eaton Hodgkinson was a leading theorist on strength of materials. Hodgkinson believed that it would be impractical to make the tubes stiff enough, and advised auxiliary suspension from chains. However, Fairbairn believed chains unnecessary declaring:

Provided that the parts are well-proportioned and the plates properly rivetted, you may strip off the chains and have it as a useful Monument of the enterprise and energy of the age in which it was constructed.

The consensus of received engineering opinion was with Hodgkinson, but Stephenson, rather nervously, backed Fairbairn's analysis. A 75-foot span model was constructed and tested at Fairbairn's Millwall shipyard, and used as a basis for the final design. Although Stephenson had pressed for the tubes to be elliptical in section, Fairbairn's preferred rectangular section was adopted. Fairbairn was responsible both for the cellular construction of the top part of the tubes, and for developing the stiffening of the side panels. 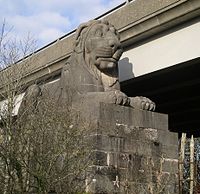 One of four Monumental lions

The bridge was decorated by four large lions sculpted in limestone by John Thomas, two at either end. These were mocked gently in the a rhyme by the poet John Evans (1826–1888), who was born in nearby Porthaethwy:

The lions cannot be seen from the A55 which crosses the modern bridge on the same site, although they can be seen from trains on the North Wales Coast Line below. The idea of raising them to road level has been suggested from time to time. 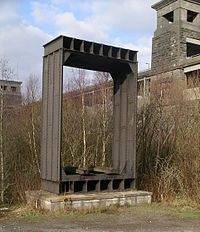 Begun in 1846, the bridge was opened on 5 March 1850. For its time, it was a bridge of "magnitude and singular novelty", far surpassing in length contemporary cast beam or plate girder iron bridges. One aspect of its method of construction was also novel; the box sections were assembled on-shore, then floated out into position before being gradually lifted into place using powerful jacks.

There was originally a railway station on the east side of the bridge at the entrance to the tunnel, run by the Chester and Holyhead Railway company, which served local rail traffic in both directions.[3] This station closed after 8½ years in operation owing to low passenger volumes. Nothing now remains of the station other than the remnants of the lower-level station building.[4] A new station named Menai Bridge was opened shortly afterwards.

The construction techniques employed on the Britannia Bridge influenced Isambard Kingdom Brunel in the construction of the Royal Albert Bridge across the River Tamar at Saltash.

During the evening of 23 May 1970 the bridge was greatly damaged when boys playing inside the bridge dropped a burning torch, setting alight the tar-coated wooden roof of the tubes.[5] Despite the best efforts of the Caernarfonshire and Anglesey fire brigades, the bridge's height, construction and the lack of an adequate water supply meant they were unable to control the fire which spread all the way across from the mainland to the Anglesey side. After the fire had burned itself out the bridge was still standing but the structural integrity of the iron tubes had been critically compromised by the intense heat. As a consequence the bridge was completely rebuilt by Husband & Co.

The new design was for an arched bridge. Concrete supports were built under the approach spans and steel archways constructed under the long spans on either side of the central Britannia Tower. The bridge reopened to rail traffic (albeit with only a single line of rails and with reduced speed) on 30 January 1972. Over subsequent months the original box tubes were removed and the stonework of the towers was restored. The original deck below the rail lines was cosmetically restored.

In 1980, almost 10 years after the fire, the upper road level opened, carrying a single-carriageway section of the A55 road. 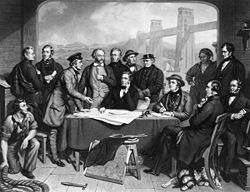 Robert Stephenson (centre) with the engineers, 1868

In November 2007, a public consultation exercise began into the ‘A55 Britannia Bridge Improvement’, considering perceived problems with the bridge, including its being the only non-dual-carriageway section along the A55, congestion during the morning and afternoon peak and on the arrival of ferry traffic from Holyhead, queuing and an expectation of increased traffic over the next 10 years.

Options included doing nothing, and simply bearing the increased congestion, widening the existing bridge, which would however require removal of the towers to make room for the extra lanes, which even then would be limited by the bridge’s load capacity, or the building of a new bridge alongside.

Respondents were overwhelmingly in favour of seeing some improvements, with 70% favouring the solution of building a second bridge.[6]

Very few other tubular iron bridges were ever built since more economical bridge designs were soon developed. The most notable of the other tubular bridges were Stephenson's Conwy railway bridge between Llandudno Junction and Conwy, and the Victoria Bridge across the Saint Lawrence River at Montreal in Canada.

The Conwy railway bridge remains in use, and is the only remaining tubular bridge; however, intermediate piers have been added to strengthen it. The bridge can be seen at close quarters from Thomas Telford's adjacent 1826 Conwy Suspension Bridge.