According to the 2001 census, the population of the community is 3,040, of whom 76% speak Welsh fluently. It is the fifth largest settlement on the Anglesey by population.

Typically visitors stop at the Llanfairpwllgwyngyllgogerychwyrndrobwllllantysiliogogogoch railway station to be photographed next to the station sign, visit the nearby Visitors' Centre, or have 'passports' stamped at a local shop. Another tourist attraction is the nearby Marquess of Anglesey's Column, which at a height of 88 feet high offers views over Anglesey and the Menai Strait. The Column, designed by Thomas Harrison, celebrates the heroism of Henry Paget, 1st Marquess of Anglesey at the Battle of Waterloo.

The long form of the name is the longest officially recognised place name in the United Kingdom and one of the longest in the world, being 58 letters in length according to English orthography, or 51 letters in the Welsh alphabet in which "ch" and "ll" each counts as a single letter.

St Mary's Church (Llanfair) in a hollow (pwll) of white hazel (gwyngyll) near (goger) the swirling whirlpool (y chwyrndrobwll) of the church of (St) Tysilio (llantysilio) with a red cave ([a]g ogo goch).

The village's long name was artificially contrived in the 1860s to bestow upon the station the honour of having the longest name of any railway station in the United Kingdom; the village's own web site credits the name to a cobbler from the local village of Menai Bridge. According to Sir John Morris-Jones, the name was created by a local tailor, whose name he did not confide, letting the secret die with him. 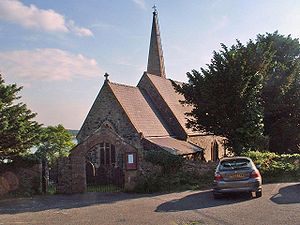 The name is also seen shortened to Llanfair PG, which is sufficient to distinguish it from the many other Welsh villages with Llanfair in their names. Other variant forms use the full name but with tysilio mutated to dysilio, and/or with a hyphen between drobwll and llan.

A settlement has existed on the site of the village since the Neolithic era, with subsistence agriculture and fishing the most common occupations for much of the village's early history. The island of Anglesey was at that point only reachable by boat across the Menai Strait. The area was briefly invaded and captured by the Romans under Gaius Suetonius Paulinus, temporarily abandoned in order to consolidate forces against Boudicca, then held until the end of Roman Britain.

With the withdrawal of the Roman forces, the area fell under the control of the Kingdom of Gwynedd, an early mediæval kingdom. Under this feudal system, the residents worked small farms for the king. The rural nature of the settlement meant that the village had a population of only around 80.

However, with the introduction of estates in the 16th century, much of the land was absorbed into the Earldom of Uxbridge, currently under the Marquess of Anglesey, and the population forced to work as tenants on enclosures. The population of the village boomed, with a population of 385 in the 1801 census.

In 1826, the village was connected to mainland Great Britain by the construction of the Menai Suspension Bridge by Thomas Telford, and connected with London in 1850 with the building of the Britannia Bridge and the busy North Wales Coast Line, which connected London to the ferry port of Holyhead. The village decentralised, splitting into Upper Village (Pentre Uchaf), which was made up mainly of the older houses and farms, and the new Lower Village (Pentre Isaf), built around the railway station and consisting mostly of shops and workshops. The village became a hub of commerce, as the railways and road network brought traders and customers from across north Wales.

The first ever meeting of the Women's Institute took place in Llanfairpwll in 1915 and the movement (which began in Canada) then spread through the rest of the British Isles.

In recent years the village has spread and has become less like a village and more like a northern suburb of Bangor.