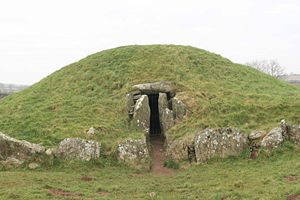 Bryn Celli Ddu is a prehistoric burial mound on the Isle of Anglesey, near Llanddaniel Fab. It is a Stone Age passage tomb, and one of the finest examples outside Ireland.

The name of the site means 'the mound in the dark grove'. It was archaeologically excavated between 1928 and 1929. Today visitors can get inside the mound through a stone passage to the burial chamber, and it is the centrepiece of a major Neolithic Scheduled Monument in the care of Cadw.

The presence of a mysterious pillar within the burial chamber, the reproduction of the 'Pattern Stone', carved with sinuous serpentine designs, and the fact that the site was once a henge with a stone circle, and may have been used to plot the date of the summer solstice have all attracted much interest.

Bryn Celli Ddu is generally considered to be one of the finest passage tombs in Wales. Unlike many stone chambered tombs, this not only has a complete passage and burial chamber, but is also buried under a mound or cairn, although this was re-instated following its excavation in 1929. As it now stands, the passage is 28 feet long, the first 11 feet being unroofed with a pair of portal stones. The main passage runs between vertical slab rocked walls roofed by a series of stone lintels. The mound, being substantially smaller than as originally made, no longer completely encloses the burial chamber, so the back wall is open to the air, allowing some natural light in.[1]

Several unusual stones are at the site. Free-standing inside the burial chamber is a smooth stone pillar, some six feet high, with a very rounded shape. Shaped stones of this sort are very rare.[1] Rupert Soskin and Michael Bott recently suggested that it could be the petrified remains of a tree trunk.[2] 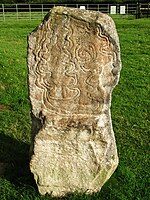 Beyond the back wall of the chamber, in a location that would once have been within the mound, is a replica of the 'Pattern Stone'. This was found buried under the mound, and has been put standing up in what is thought to have been its original location at a time when the site was a henge rather than a tomb. The patterns take the form of sinuous serpentine shapes that wind around both sides of the stone. Inside the tomb another stone has a small spiral pattern chipped into it, although its authenticity has been questioned.[3] 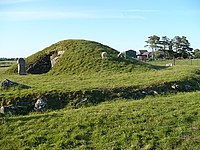 Outside the tomb, a ring of kerbstones shows the original extent of the mound, and they also follow the line of the ditch of the earlier henge monument. Three of the stones, visible within the cairn mound, are thought to be from the stone circle of that time.

The passage is roughly aligned with the Summer Solstice sunrise, such that for some weeks around the summer solstice, sunlight can find its way through to the back wall of the burial chamber.[4]

The monument is part of a cluster of Neolithic and Bronze Age features. Two further cairns have been identified just to the south of Bryn Celli Ddu,[5] while in the field immediately to the west is a standing stone,[6] and a rock outcrop with cupmarks carved into it.[7]

The earliest identified remains at the site are a row of five postholes previously thought to have been contemporary with the tomb. Radiocarbon dating of pine charcoal from two of the pits, carried out in 2006, showed these to date from around 4000BC, putting them at the end of the Mesolithic, 1,000 years before the next phase of use.[4] Their purpose, however, is unknown.

In around 3000BC a 'Henge monument' was constructed. An outer circular bank and ditch would have defined the boundary, although only the ditch survives, some 69 feet across. A ring of 17 stones formed an oval, many being in matched pairs either side of the centre. Cremated human remains were buried at the base of some of them. During this period a pit was dug within the henge, a single human ear-bone was buried, and covered with a flat slab.[3] A second stone, known as 'The Pattern Stone' lay nearby, with the serpentine patterning on it. It is thought this would have stood upright within the henge, as the patterns cover both sides.[1] 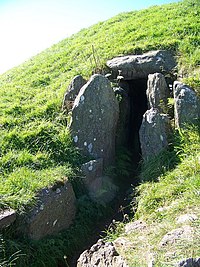 Model of Bryn Celli Ddu in the Museum of Wales, Cardiff

Some 1000 years after the henge was built, the site was radically altered. All but one of the standing stones were intentionally damaged, some were knocked over and six were smashed with heavy stones.[1] In its place a passage grave was built. Much larger than the mound now remaining, it would have had a complete circle of kerbstones following the line of the old henge ditch, creating an impressive retaining wall around the mound, 85 feet across.[8] The burial chamber would have been entirely enclosed within the mound, rather than the back wall being open to the air, as in the reconstructed mound now seen. Individual human bones, both burnt and unburnt, were found within the chamber and passage, suggesting a variety of funeral practices, but in all cases re-using the tomb, and clearing aside the old remains.[9]

At the end of its period of use the tomb was 'closed' by means of a large stone set across the entrance, between the two portal stones.[1]

The earliest archaeological descriptions date to around 1800. In 1796 it was included on a list of Anglesey cromlechs in the Cambrian Register. In 1802 Rev John Skinner made a "Ten Days' Tour Through the Isle of Anglesea", an account of which he wrote up, but never published, describing the numerous archaeological sites he visited. It was finally published as a supplement to Archaeologia Cambrensis in 1908. On his visit to Bryn Celli Ddu, he was told how the passage tomb had been discovered a generation before, by a farmer looking for useful stone. The sight of the pillar stone had initially unnerved the discoverer, but the prospect of treasure tempted him back, where he uprooted the pillar.[10]

Having suffered depredation of the more movable stones of the site, the monument was excavated by W J Hemp in 1928-29. He revealed much of the sequence of use on the site, and found the 'Pattern Stone'.[11] It has since been moved to the National Museum of Wales and replaced with a replica standing outside the back wall, but within the area of the original mound, and close to the spot where it was found.[1] The Pillar was set back upright, the earth and stone mound covering the passage and chamber was reinstated, but clearly there was much less material available than had been used originally. Some additional concrete roof supports have also been added at some point.[1]

Norman Lockyer, who in 1906 published the first systematic study of megalithic astronomy, had argued that Bryn Celli Ddu marked the summer solstice. This was ridiculed at the time, but research by Christopher Knight and Robert Lomas in 1997- 98 showed this to be true.[12] Knight and Lomas also claimed year round alignments allowed the site to be used as an agricultural calendar. Steve Burrow, curator of Neolithic archaeology at the National Museum of Wales, has more recently supported the case for summer solstice alignment. This alignment links Bryn Celli Ddu to a handful of other sites, including Maes Howe, Orkney and Newgrange in Meath, Ireland, both of which point to the Winter solstice. It has also been suggested that a feature similar to the 'lightbox' at Newgrange may be matched at Bryn Celli Ddu.[4]

The serpentine pattern and the passage tomb featured strongly in the short animated film, 'Songs from Stones', about some of Anglesey's evocative archaeological sites and artifacts, produced as part of the Cultural Olympiad in 2012.[13]