Appleby-in-Westmorland is the county town of Westmorland. It stands within a loop of the River Eden and has a population of approximately 2,500.

Appleby's position in the Eden Valley sets it among that strip of verdant farmland between the fells and puts the county town thus in contrast to the fell-bound villages found elsewhere in Westmorland. The fells can cut parts of Westmorland off from one another and in the days of the Quarter Sessions, each session had to be adjourned from Appleby having done its businsess there to sit also in Kendal, the county's second capital.

The town's name was simply Appleby until 1974. In that year the new parish council effected a change in the town's name in fear that the local government changes of that year would expunge Westmorland from memory, and so to reinforce the county's name it was added to that of Appleby.

Appleby is the site of the celebrated horse fair attended by Gypsies, who race carts along the main street apart from the serious business of horse-trading. 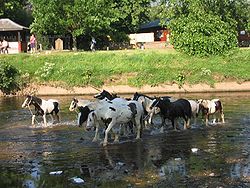 Gypsy horses in the River Eden

Appleby's main industry is tourism, a gift of its history, remote location, scenery and closeness to the Lake District, the North Pennines, Swaledale and Howgill Fells.

Overlooking Appleby is Appleby Castle, privately owned, a predominantly Norman structure. Its most famous resident was the remarkable Lady Anne Clifford, the 17th century daughter of the Earl of Cumberland who having striven to reclaim her inheritance in trubled times, spend of her fortune restoring several churches, almshouses and castles to their former glory. The Castle is closed to visitors during the summer months so Appleby is not thronged with loud tourists even in the height of the season and allowed to get on with what small towns in farmland do best; providing goods to the farming communities round about in the Eden Valley. Many residents commute to jobs elsewhere.

The Appleby bypass takes visitors away from the town, but also otherwise passing trade. A contrast however is found at the annual Appleby Horse Fair, held regularly in early June, since at least the 18th century. Gypsies from all over Britain come to the town for the fair.

Appleby railway station is on the famous Settle-Carlisle Line, whose last, easier stretch runs down the Eden Valley. Appleby East Station was nearby but closed in 1962. Enthusiasts of the Eden Valley Railway seek its restoration and reconnection. Though a sleepy town, in the past 5 years Appleby has grown with new houses and shops.

Until the Reform Act, Appleby was a parliamentary borough which returned two members to parliament. By the 18th century it was considered a pocket borough, the nomination of its MPs effectively being in the gift of the Earl of Lonsdale. Its representatives included William Pitt the Younger, who was a member for Appleby when he became Prime Minister in 1783, though he stood down at the following general election when he was instead elected for the University of Cambridge. A later member for Appleby was Viscount Howick, subsequently (as Earl Grey) the Prime Minister whose ministry effected the passing of the Reform Act 1832 which disenfranchised Appleby. Appleby was one of the more controversial cases in the debates on the Reform Bill as no other county town was to be disfranchised. The opposition made attempts to amend the Bill so as to save at least one of its members, ultimately unsuccessfully.