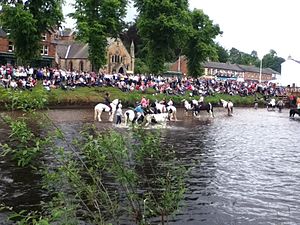 Horses in the Eden at Appleby 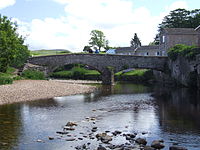 The Eden at Kirkby Stephen

The River Eden is a river that flows through two counties, Westmorland and Cumberland, to the Solway Firth below Carlisle.

The river creates the Eden Valley, which is a corridor of rich, green farmland separating the fells of the Lake District in the west from those of the Pennines in the east, and in this valley and on the river sits Westmorland’s county town, Appleby.

The Eden rises in Black Fell Moss on Mallerstang Common at the southern bounds of Westmorland, by the watershed on the high ground between High Seat and Hugh Seat. Two other great rivers arise in the same peat bogs here, within a mile of each other, namely the River Swale and the River Ure, these latter across the watershed and flowing east. 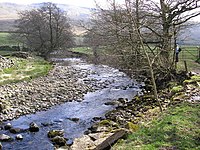 The Eden on Mallerstang Common

The Eden starts its life as a minor gill known as Red Gill Beck, then becomes Hell Gill Beck, which for a while forms the boundary between the counties of Westmorland and York before abruptly turning north as it swallows the waters of the Ais Gill Beck to become the River Eden.

Hell Gill Force, over which the Hell Gill Beck tumbles just before it meets Ais Gill Beck, is the highest waterfall along the Eden's journey to the sea.

The infant Eden flows almost due north down steep-sided dale of Mallerstang, growing as it goes until its first town, a tiny one at that, at Kirkby Stephen, by which pint the once narrow valley has become the Valer of Eden.

From Kirkby Stephen the river continues north amongst gentler country, receiving several other rivers coming off the Lakeland fells and the Pennines; the Scandal Beck, the Belah and the Swindale Beck coming in short order, after the later of which its course turns generally northeast. It passes the foot of the village of Warcop, at which point the Eden Valley Railway and the A66 (on the course of an old roman Road) come to join the Eden Valley. Soon afterwards the river reaches Appleby-in-Westmorland.

Appleby is in the heart of the Eden Valley. In contrast to much of Westmorland, this is a gentle, green place, but with the fells a presence looming up on either side. At Appleby the Eden performs an s-shaped meander, to town tucking into the first loop; this was long ago recognised as a defensive position and Appleby castle was built here protected on three sides by the waters of the River Eden.

Below Appleby, the Eden pursues a meandering course, the valley still bearing it north-westwards. It receives the Hoff Beck just belown Appleby, then passes Bolton and the paradoxically named Kirkby Thore, then soon after swallows the River Lyvennet, another iver Taliesin immortalised. At Temple Sowerby the river is crossed by the A66, then the Crowdundle Beck on the east marks the border with Cumberland. The eden itself forms the border for a short while until the River Eamont, which arrives by way of Ullswater, enters the Eden below Penrith. Thereafter the Eden is in Cumberland. 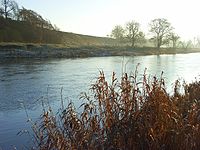 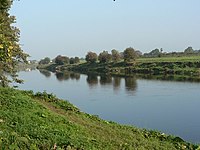 The Eden beyond Carlisle

Continuing north from the Eamont, the River Eden passes by Langwathby and on close to the ancient stone circle known as Long Meg and Her Daughters, by Great Salkeld and Little Salkeld, still heading northwest.

It is a broad river which wanders lazily past Lazonby. From here the Eden flows through the sparsely populated beef and dairy farming regions of the Vale of Cumberland on the Solway Plain.

At Wetheral the river is crossed by Corby Bridge, a Grade I listed railway viaduct of 1834, and heads due north to Warwick Bridge. Soon it receives the waters of the River Irthing from the east, and from here the Eden meanders westwards and into Carlisle, where the River Petteril and River Caldew join it from the south.

The River Caldew enters the Eden in northern Carlisle at the point where Hadrian's Wall crosses the Eden, only five miles before both reach their end at the tidal flats.

The Eden leaves Carlisle and in a series of wild meanders north and west it reaches the Solway Firth near the mouth of the River Esk after a total course of 90 miles. It is separated from the Esk by the Rockcliffe Marsh, but at low water it is several miles down the Solway, opposite Port Carlisle, before the channels of the two rivers meet.

The river was known to the Romans as the Itouna, as recorded by the Greek geographer Claudius Ptolemaeus (Ptolemy) in the 2nd century AD. This name derives from the ancient British word reconstructed as ituna, meaning water.[1] or rushing.[2]

In Taliesin's poems in praise of Urien of Rheged, the Dark Age kingdom in these parts, the river is named, in Old Welsh, Adon. 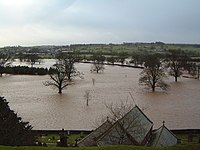