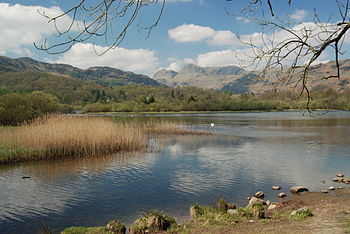 Elter Water with the Langdale Pikes behind

Elter Water is a small lake within the Lake District on the border of Westmorland with Lancashire; the lake shore is almost wholly in Westmorland but Lancashire reaches so that its northernmost point is here in the lake.

In a splendid setting, which draws many visitors, Elter Water stands at the entrance to Great Langdale, one of the most scenic valleys of the Lake District. It is flanked by afforested slopes and high moorland and from here the view climbs up to the Langdale Pikes. Some of the shoreline belongs to the National Trust.

Half a mile north-west of the water is the village of Elterwater, also in Great Langdale. Just to the north of the Langdale valley can be found the slightly larger village of Chapel Stile.

The river Brathay flows out of Elter Water, whence it flows south to join Windermere, near Ambleside.[1]

Navigation is prohibited on the lake.[1]

This is swan lake: the most common etymology is from the Old Norse elptar vatn or alptar vatn, meaning "swans' lake". Alternatively, Elterwater may mean Alder Water.[1]

Elter Water is divided in two by Nab Island, a low-lying, marshy place barely separated from the north and south shores of the lake. Nab Island is the northernmost point of Lancashire.

Being the smallest of the sixteen lakes, being only half a mile long, it is sometimes forgotten and Brothers Water often gets included in the list instead.