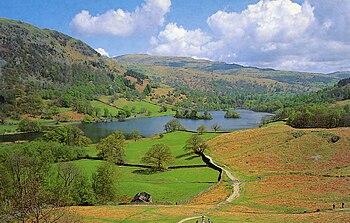 Rydal Water is a small lake in possibly the most beautiful dale in the Lake District, in Westmorland, in the heart of the Lakes. By its shores stands the hamlet of Rydal. It is a colleague to Grasmere, the lake just upstream on the River Rothay.

The lake and hamlet are found between Grasmere and Ambleside in the dale of the River Rothay.[1]

The lake is 1290 yards long and varies in width up to a maximum of 380 yards, covering an area of 76.8 acres (0.1 square mile). It has a maximum depth of 65 feet and an elevation above sea level of 177 feet. The lake is both supplied and drained by the river Rothay, which flows from Grasmere upstream and towards Windermere downstream.[1]

The waters of the southern half of the lake are leased by the Lowther Estate to the National Trust, whilst those of the northern half belong to the estate of Rydal Hall. Navigation is prohibited, except for residents of Rydal Hall.[1]

Numerous walks are possible in the surrounding hills, as well as a walk around the lake itself, which takes in Dove Cottage and Rydal Mount, both homes to William Wordsworth, and Rydal Cave, a former quarry working. At the western end of the lake, steps lead to Wordsworth's Seat, which is considered to have been Wordsworth's favourite viewpoint in the Lake District.

White Moss House, at the northern end of the lake, is believed to be the only house that Wordsworth ever bought. He bought it for his son Willie, and the family lived there until the 1930s. Nab Cottage overlooks the lake and it was once home to Thomas de Quincey and Hartley Coleridge, the son of Samuel Taylor Coleridge. Close by is the historic Rydal Hall.

Rydal is "the dale where rye is grown", from the Old English ryge. Rydal Water was formerly known also as 'Routhmere', the lake of the Rothay, which runs eastwards through it.[2].