Kirkby Stephen is a village in Westmorland, found on the A685 road, surrounded by sparsely populated hill country, and about 30 miles from the two nearest large towns, Kendal and Penrith. It is also a market town. The River Eden rises six miles away in the peat bogs below Hugh Seat and passes by, almost unobserved, on the eastern edge of the town.

The civil parish of Kirkby Stephen covers several smaller villages and parishes in the surrounding area, including Nateby, Ravenstonedale and Mallerstang.

St Stephen's parish church is called the "Cathedral of the Dales" and in Westmorland only the church in Kendal is larger. Three churches have stood on this spot. The first was built in Anglo-Saxon times; it was followed in 1170 by a Norman church which stood only about seventy years before being replaced by the present church in 1240. The church has been altered considerably in the centuries since its first form. It was partly rebuilt in 1847 and further restored in the 1870s.

The church is approached from the market square, where it is almost hidden from view by the picturesque cloisters, built in 1810.

The church contains several ancient monuments, including monuments to the Musgrave and Wharton families. Its most interesting stonework however is a Norse relief apparently showing the Devil bound in chains; the Devil being portrayed in the manner of the Norse god Loki.[1] That the Norse settled here in the Viking age is accepted; the very name of the village is Norse for "Church town").

Sketch of the Loki Stone

Kirkby Stephen received the right to hold a market by a charter granted in 1606 to George, Earl of Cumberland, by King James I. The charter permits "one market on Monday and two fairs yearly; one on the Wednesday, Thursday and Friday after Whitsuntide and the other on the two days next before the feast of St Luke".

The Monday market, with livestock sales at the Mart in Faraday Road and stalls on Market Square, is still an important event in the town and surrounding countryside. In 2006 there were special celebrations to mark the 400th anniversary of the King James charter. St Luke's Fair, or "Charter Day", is celebrated every year at the end of October, beginning with the Charter being read at the "Charter Stone" in High Street. The special Tup sales, very important in this sheep rearing area, still take place at around this time each year.

Things in and around the town

There is a good range of shops, also several antique shops, restaurants, cafés, pubs and a Tourist Information Office. In recent years there has been an annual music festival. The town has won several awards from Britain in Bloom.

Kirkby Stephen serves as a base for tourism in the Eden Valley area and for walking tours of the dales. It is on the line of the Coast to Coast Walk, devised by Alfred Wainwright,[2] Each June there is the "Mallerstang Horseshoe and Nine Standards Yomp" which takes a strenuous route along the high ground along both sides of the neighbouring dale of Mallerstang, including Wild Boar Fell and the summit of nearby Nine Standards Rigg.

The surrounding countryside is a joy for walkers but the Kirkby Stephen Mountain Rescue Team sometimes has to assist those who are not fully prepared for the occasionally harsh conditions on the fell tops.

Faraday Road, parallel with High Street and Market Street, is named not in honour of the great scientist, Michael Faraday (1791–1867) as often believed but after his uncle, Richard Faraday, who was a respected local tradesman. Richard's younger brother, James, was for some time the blacksmith in Outhgill, nearby. James's third child, Michael, was born soon after they had moved to London. The Faraday brothers had been prompted to move from Clapham in Yorkshire to the Kirkby Stephen area because the family were all staunch members of the Sandemanian sect and at that time one of the few Sandemanian communities was here, its chapel in the courtyard behind what is now the bank.

Sights of the countryside 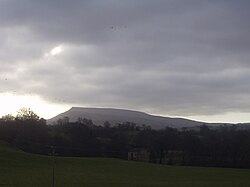 Unlike neighbouring Brough, there is no evidence of any Roman presence here, but there are many traces of even more ancient settlements in the area, including the remains of a large Iron Age earthwork or hill fort known as "Croglam Castle" on the southeastern edge of the town.

Kirkby Stephen railway station, on the Settle-Carlisle Line, is located over a mile south-west of the village. (This railway line kept to the high ground and avoided dropping down into the valleys wherever possible. Until the 1960s there was another, and older, railway station in the village, Kirkby Stephen East at the southern edge of the village on the Stainmore line and Eden Valley lines. Work is in progress to restore parts of these defunct lines by the Stainmore Railway Company and Eden Valley Railway Society respectively.