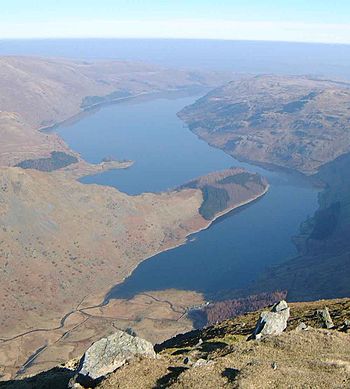 Haweswater is a lake in Mardale in Westmorland, and part of the Lake District. The lake as it is seen today is a reservoir, its waters dammed and raised between the wars.

The lake fills its dale. It is fed by many streams off the fells, and the Haweswater Beck emerges at its foot, to flow down to the River Lowther. The surrounding land has several grand fells; High Raise (2,635 feet) is to the west, and near it High Street (2,720 feet). Harter Fell (2,510 feet) is behind its head to the south, and to the east is the gentler Swindale Common. A path, the Old Corpse Road, leads up from Haweswater over the common and down into Swindale.

Originally, before the dam was built to create the reservoir, Haweswater was a natural lake about 2½ miles long and almost divided in two by a tongue of land at Measand; the two reaches of the lake were known as High Water and Low Water.

The name "Haweswater" is of uncertain origin, but it has been suggested it may possibly be "Hafr's lake", from a personal name such as Old Norse Hafr or a postulated Old English Hæfer.[1]

The construction of the Haweswater dam started in 1929, after a private Act of Parliament gave the Manchester Corporation permission to build the reservoir to supply water for Manchester. At the time, there was public outcry about the decision, as the valley of Mardale was populated by the farming villages of Measand and Mardale Green and the construction of the reservoir would mean that these villages would be flooded and lost and the population would have to be moved. In addition, the valley was considered one of the most picturesque in Westmorland and ought to have been left alone amongst its many natural blessings. 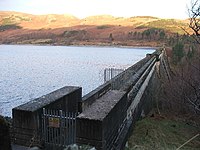 The building of the dam raised the water level by 95 feet and created a reservoir four miles long and around half a mile wide. The dam wall measures 1,542 feet long and 90 feet high; at the time of construction it was considered to be cutting-edge technology as it was the first hollow buttress dam in the world, being constructed using 44 separate buttressed units joined by flexible joints. There is a parapet, 56 inches wide, running the length of the dam and from this, tunnelled supplies can be seen entering the reservoir from the adjoining valleys of Heltondale and Swindale. When the reservoir is full, it holds 18.6 billion gallons of water.

The reservoir is now owned by United Utilities plc and plays a vital role in supplying about 25% of the North West's water supply.

Before the valley was flooded in 1935, all the farms and dwellings of the villages of Mardale Green and Measand were demolished, as well as the centuries-old Dun Bull Inn at Mardale Green. The village church was dismantled and the stone used in constructing the dam; all the bodies in the churchyard were exhumed and re-buried at Shap. Today, when the water in the reservoir is low, the remains of the submerged village of Mardale Green can still be seen as stone walls and the village bridge become visible as the water level drops.

The Manchester Corporation built a new road along the eastern side of the lake to replace the flooded highway lower in the valley, and the Haweswater Hotel was constructed midway down the length of the reservoir as a replacement for the Dun Bull. The road continues to the western end of Haweswater, where a small car park has been built; this is a popular starting point for walkers who want to climb the surrounding fells of Harter Fell, Branstree and High Street.

Lake District writer and fell walker Alfred Wainwright had this to say on the construction of the Haweswater dam in his A Pictorial Guide to the Lakeland Fells:

If we can accept as absolutely necessary the conversion of Haweswater [to a reservoir], then it must be conceded that Manchester have done the job as unobtrusively as possible. Mardale is still a noble valley. But man works with such clumsy hands! Gone for ever are the quiet wooded bays and shingly shores that nature had fashioned so sweetly in the Haweswater of old; how aggressively ugly is the tidemark of the new Haweswater!"[2] 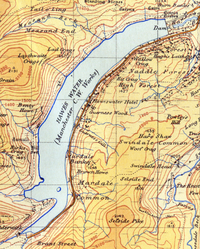 A map of Haweswater Reservoir from 1948

The Haweswater valley is the only place outside the Highlands where golden eagles nest, or at least used to nest.[3] There is an RSPB observation post in the valley of Riggindale, where the pair have their eyrie (the viewpoint is manned by volunteers on weekends and bank holidays from Easter to the end of August). A pair of eagles first nested in the valley in 1969 and the male and female of the pairing have changed several times over the years, during which sixteen chicks have been produced. The female bird disappeared in April 2004, leaving the male on its own. However, the RSPB are hoping a replacement female will be drawn to the area. The male is believed to be about 15 years old (as he was already at breeding age when he arrived in 2001), so only middle-aged as far as eagles go.

In 2012 the RSPB took over the management of Naddle Farm, in partnership with United Utilities.[4] The aim is to combine moorland and woodland habitat improvements—for birds as well as the rare Small Mountain Ringlet butterfly—with improvements to water management and with a sensitive farm business. Measures include grip blocking, heather replanting, juniper woodland planting (especially in ghylls).

Haweswater in literature and popular culture

Hawes Water is described in Anthony Trollope's novel Can You Forgive Her? (1864).

Haweswater (2002) is also the name of a novel by Sarah Hall, set in Mardale at the time of the building of the dam and flooding of the valley. It won the Commonwealth Writers' Prize for a First Book in 2003. The novel was released in the United States as a paperback original in October 2006, by Harper Perennial.

Haweswater is the lake that can be seen from the door of 'Crow Crag' in the film Withnail & I although filming of the cottage itself was done elsewhere.