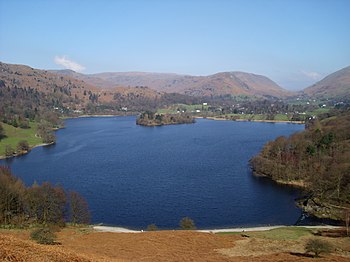 From Loughrigg Terrace towards Grasmere village

Grasmere in Westmorland is one of the smaller lakes of the Lake District but one of the more famous, lying at the heart of Lakeland and its finest scenery. The lake gives its name to the village of Grasmere on the north shore of the water, and both are celebrated for their association with the poet William Wordsworth.[1]

To the east of Grasmere rises Rydal Fell, 2,037 feet, and its subsidiary top, Heron Pike looking over the lake at 2,008 feet, both part of the great fell Fairfield, which climbs to 2,864 feet northeast of Grasmere. To the west are the crags of Silver How, rising to a more modest 1,293 feet.

To the north of Grasmere, either side of the dale, are Stone Arthur (another Fairfield crag top) and Helm Crag (1,329 feet), famous for its peaks "the Lion and the Lamb". Grasmere Common continues to rise beyond Helm Crag up to High Raise at 2,500 feet.

Between these spectacular, rough fells, Grasmere is a green delight, a restful, cooling, pretty place, and that the lake has attracted some many poets and painters down through the ages is no wonder.

The lake and shore

The lake is both fed and drained by the River Rothay, which forces a steep dale between the fells here. The river flows through the village before entering the lake, and then exits downstream into nearby Rydal Water, beyond which it continues into Windermere.[1][2]

The waters of the lake are leased by the Lowther Estate to the National Trust. The waters are navigable, with private boats allowed and rowing boats for hire, but powered boats are prohibited. The lake contains a single island, known as The Island.[1]

Since 2012 the lake's north-easterly inlet has been home to the Daffodil Hotel, which is overseen by the Harwood and Brady families.[3]

The name of the village is taken from that of the lake. The name "Grasmere" may be Old English or Old Norse; the accepted etymology is from the Old English Gærsmere ("Grass mere"), or the Old Norse gras meaning "grass". Another possibility is the Norse gris, meaning "Pig".

Early, Middle English spellings us 'Grys-', 'Gris(s)-' might suggest ' pig', but the weight of the evidence points to English or Norse for "grass" with the modern form influenced by Standard English.[4][5]

Grasmere is a village of Westmorland, and a popular tourist destination. It sits at the heart of the Lake District and is named from the lake on whose shore it stands.

The village is associated with the Lake Poets. The poet William Wordsworth, who lived in Grasmere for fourteen years, described it as "the loveliest spot that man hath ever found".[6] His home, Dove Cottage, is a pretty cottage now as then and a must-see on the visitor's itinery.

The village is on the river Rothay which flows into the lake. The village is overlooked from the northwest by the rocky hill of Helm Crag, popularly known as The Lion and the Lamb or the Old Lady at the Piano. These names are derived from the shape of rock formations on its summit, depending on which side you view it from.[7] 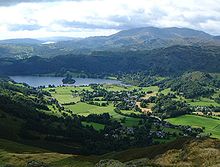 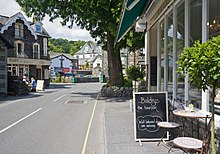 A number of popular walks begin near the centre of the village, including the ascent of Helm Crag and a longer route up to Fairfield. The village is also on the route of Alfred Wainwright's Coast to Coast Walk.[8]

The A591 connects Grasmere to the Vale of Keswick over Dunmail Raise to the north, and Ambleside to the south. In other directions, Grasmere is surrounded by high ground. To the west, a long ridge comes down from High Raise and contains the lesser heights of Blea Rigg and Silver How. To the east, Grasmere is bordered by the western ridge of the Fairfield horseshoe.

Grasmere's famous Rushbearing Ceremony, centred on St Oswald's Church]], has ancient origins. The present day ceremony is an annual event which features a procession through the village with bearings made from rushes and flowers. In this procession there are also six Maids of Honour, a brass band, the church choir, and anyone who wishes to join in by carrying their own decorated rushbearing

The annual Grasmere Sports take place in August and were first held in 1852. This is the main event in the village's calendar and one of the most popular traditional events in the Lake District. Participants compete in a variety of sports, including Cumberland Wrestling, fell running and hound trails (similar to drag hunting).[9]

Today's Grasmere Gingerbread is made to a "secret recipe" popularized by Sarah Nelson (1815-1904).[10][11] By the early nineteenth century, Grasmere gingerbread was already being sold as fairings, as well as being a popular seller in its own right.[12] Poet Dorothy Wordsworth wrote in 1803 that she and her brother William yearned for the gingerbread.[12] 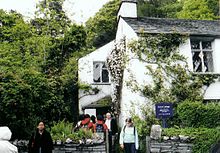