The United Kingdom has competed at every Olympiad since the modern games were founded in 1896 with the Athens Games of that year, although in 1980 the British Government boycotted the Moscow Games and a reduced team took part, marching in the opening ceremony as "BOA" rather than "United Kingdom". At the 2012 London Olympic Games, Team GB fielded 541 athletes.

Athletes may be eligible for the Great Britain and Northern Ireland Olympic Team if from the United Kingdom, the Crown dependencies and all but three of the British overseas territories; each of the Cayman Islands, British Virgin Islands and Bermuda has its own national Olympic Committee. 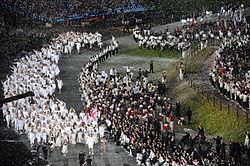 The 2012 Summer Olympics where hosted by London from 27 July to 12 August 2012 and the Paralympics from 27 August. London is the only city to have hosted the Summer Olympics on three occasions, having previously done so in 1908 and 1948. As the host nation, the United Kingdom gained automatic qualification places in a number of events. It was the only nation to compete in all 26 sports at the Games,[1] sending a total of 554 athletes.

On the 11th day of the Games, the team achieved their target of 48 medals and surpassed the tally of 19 gold medals achieved at Peking four years before, to make it the most successful Olympic Games for the British team since the London Games of 1908.

The medal winners listed below are those who, individually or as part of a team, won a Gold, Silver or Bronze medal amongst Team GB in the 2012 Olympic Games. The details are provided by the British Olympic Association, and it gives a link to each athlete's details on the Team GB website. Since the medallists include all those who were members of a medal-winning team, so the number of medals exceeds the number won by Team GB overall.

The brand-name "Team GB" was developed after the 1996 Summer Olympics. It is meant to unify the team as one body, irrespective of each member athlete's particular sport. It forms part of a marketing strategy, where its brevity is seen as beneficial. "Team GB" is now a trademark of the British Olympic Association. The brand is seen as controversial by some for focussing on Great Britain, at the expense of Northern Ireland, the Crown dependencies and the eligible British overseas territories, all of which are represented by the Association, with critics suggesting that it be changed to "Team UK", something the BOA has so far rejected.

The British Olympic Association's director of marketing, Marzena Bogdanowicz said: "I went to the games in 1996 and the logo at the time was just the lion and the rings, but we weren't strong enough as a brand to just be a lion and the rings. So coming back I wanted to find something that was less of a mouthful, and also had that team feel. We looked at the options and came up with Team GB."[3] The name was registered as a trademark in September 1999.

While the team is officially known as the Great Britain and Northern Ireland Olympic Team,[2] the use of Team GB as the BOA's branding is seen as inadequate by some, as it suggests the team is drawn from Great Britain alone, to the implied exclusion of Northern Ireland, the Crown dependencies and the eligible British Overseas Territories. In June 2009, Northern Ireland's Sports Minister, Gregory Campbell, suggested that the name be changed as it "excludes, and indeed alienates, the people of Northern Ireland".[4] Campbell's successor too, Nelson McCausland, suggested that an alternative name be found.[5] Twenty Northern Ireland athletes took part in the 2012 Olympic Games, though thirteen of them competed for "Team Ireland"; the team sent by the Republic of Ireland. [6]

Despite protestations from the British Olympic Association that the name "Team GB" should not be seen as rejecting Ulstermen, at the opening ceremony the team entered under a banner reading "Great Britain".