Roehampton is a town in Surrey which lies compressed between Putney to the east and Richmond Park to the west. The town of Barnes is to the north and Wimbledon Common to the south.

It is a town which, despite its closeness within the grand contiguous townscape of north-eastern Surrey, has a great deal of green space around it, which has made it an attractive home for the well-to-do. Wimbledon Common lies alongside, and the Richmond Park golf courses are west of Roehampton, and just south of these is the Roehampton Gate entrance to Richmond Park itself.

Roehampton Village has retained something of its rustic Georgian charm, best exemplified by the King's Head Inn, at the foot of Roehampton High Street and the Montague Arms, Medfield Street, both 17th century in origin. Beyond the confines of the old village though, the urban and modern have broken in and 1950s tower blocks stand in the Alton Estate.

Roehampton was originally a village which became a popular residential area for the wealthy within easy reach of London. Roehampton House was built in 1710, since developed into private flats. Others followed. Other 18th century aristocratic summer villas were set in parkland near Richmond Park and Putney Heath. Parkstead (Manresa) House, Downshire House, Grove House and Mount Clare are now all part of the Roehampton University campus.

Much of the old village of Roehampton is still dominated by large detached houses. An old watering trough for Victorian carriage-horses exists at the junction of Medfield Street and Roehampton Lane. The University has campaigned to have nearby Barnes railway station renamed Barnes & Roehampton as the station lies between the two areas.

Houses of the town 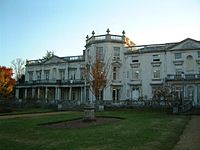 Roehampton emerged as a favoured residential suburb of the eighteenth and nineteenth centuries following the opening of Putney Bridge in 1729 and the development of a number of large private estates from which several of the original houses survive: 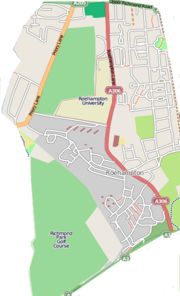 Dramatic change came to Roehampton when the London County Council built the Roehampton Estate in the 1920s and 1930s (renamed the Dover House Estate). It was one of a number of important cottage estates inspired by the Garden City movement. The land was previously the estates of two large houses, Dover House and Putney Park House, which were purchased by the London County Council soon after First World War. Dover House was demolished for the new estate, but Putney Park House remains. The common characteristic of these cottage estates is picturesque Arts and Crafts influenced housing. It was the intention at Dover House Estate to create housing in groups that overlooked or had access to open space, to provide a sense of intimacy and individuality, and the estate was laid out with communal green spaces. Allotments were also provided in three backland areas behind houses, two of which remain, the third subsequently infilled by housing. 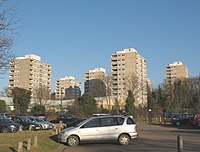 High-rise blocks in the Alton Estate

Alton Estate is one of the largest council estates in the United Kingdom and occupies an extensive swathe of land west of Roehampton village, between the Roehampton Lane through-road and Richmond Park golf courses. The estate has a mix of low and high-rise modernist architecture consisting of Alton East (1958) styled a subtle Scandinavian-influenced vernacular and its slightly later counterpart: Alton West (1959). At Highcliffe Drive on Alton West the council essentially retained the Georgian landscape and placed within it five ultra modern slab blocks inspired by Le Corbusier's Unite d'Habitation.

The Alton Estate has featured as a film and television location. The 1966 film Fahrenheit 451 used some of the estate as its backdrop for a bleak dystopian society of the future. Thames Television's film division, |Euston Films, used the Danebury Avenue area of the estate to film the opening scene's of Sweeney 2 (1978), a spin from the gritty police show The Sweeney, and for the first episode of Minder, named Gunfight at the O.K. Laundrette (1979). The estate is now part of a regeneration scheme with a number of Government initiatives such as SureStart helping to tackle issues of poverty and social exclusion. 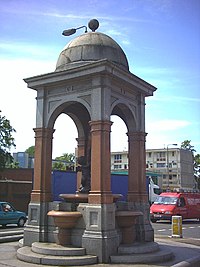