Middleton is a town in Lancashire which stands on the River Irk, 5 miles south-southwest of Rochdale, and 4½ miles north of Manchester city centre. It is a town now subsumed into the conurbation of the south Lancashire towns centred on Manchester.

The 2001 Census recorded Middleton with a population of 45,580. In 1770, Middleton was a village of 20 houses; during the 18th and 19th centuries it grew into a thriving and populous seat of textile manufacture, so much so that Middleton was granted borough status in 1886.

Middleton took its name from its position in the centre of several circumjacent settlements. Its early history is marked by its status as an ecclesiastical parish of the Salford Hundred, ruled by noble families. Middleton today is a predominantly residential area of contrasting affluence; Langley in the north of the town was one of Manchester City Council's overspill housing estates, whilst Alkrington in the south is a relatively affluent suburban area.[1]

Although unmentioned in the Domesday Book of 1086, Middleton is said to be "of great antiquity"; a community at Middleton is thought to have evolved outwards from a church that existed considerably earlier than the Norman Conquest.

The name Middleton first appears in 1194, and derives from the Old English middeltun, meaning simply "middle village", probably a reference to its central position between Rochdale and Manchester.[2]

During the Middle Ages, Middleton was a centre of domestic flannel and woollen cloth production.

The development of Middleton as a centre of commerce occurred during the 17th and 18th centuries. Lord Suffield obtained a Royal Charter from King George III in 1791 to hold a weekly market and three annual fairs in Middleton. Suffield built a market house, warehouses and shambles in the town at his own expense. 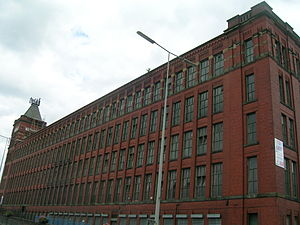 Industrial scale textile manufacture was introduced to Middleton as a result of the Industrial Revolution. Middleton became a centre for silk production in the 18th century, which developed into a cotton spinning industry by the mid-19th century and which continued through to the mid-20th century. This transition gave rise to Middleton as a mill town.

The town's local newspaper, the Middleton Guardian has a history going back to the Victorian era.

Warwick Mill is a monument to be seen from all around Middleton and was a venue for a workers' Luddite revolt.

The town was linked to the national rail network until 1964 when Middleton railway station closed. Mills Hill is now the nearest station.

Nature of the town

Much of Middleton's built environment is characterised by its 19th-century red-brick terraced houses, the infrastructure that was built to support these and the town's former cotton mills, although from the middle of the 20th century the town saw the growth of its outlying residential areas of Langley, Hollin and Boarshaw which is predominately ex-local authority housing. The skyline is marked by St Leonard's Church.

The urban structure of Middleton is regular in comparison to most towns in Britain. Residential dwellings and streets are located around the town centre.

There is a mixture of high-density urban areas, suburbs, and semi-rural locations in Middleton, but overwhelmingly the land use in the town is urban. The territory of Middleton is contiguous with other urban areas on its southern and eastern sides. The M60 motorway passes to the south of Middleton; the M62 passes to the north. A heavy rail line enters Middleton from Moston and Blackley to the south, and passes to the east of Middleton's town centre before continuing on northwards to Rochdale. 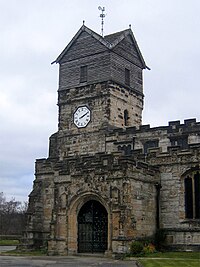 The Church of St Leonard, a Grade I listed building, lay at the centre of this community for centuries.

Today's church was completed in 1524, incorporating two stone arches made of stonework from an earlier Norman church. A wooden Saxon church is believed to have occupied the site long before the Norman church was built, in about 1100.[3] The present church was built by Sir Richard Assheton, in celebration of the knighthood granted to him by Henry VIII for his part in the Battle of Flodden Field, one of the bloodiest and daftest battles of the fratricidal wars fought between England and Scotland, and almost the last.

The Flodden Window, in the sanctuary, is thought to be the oldest war memorial in the United Kingdom.[4] It memorialises on it the names of the Middleton archers who fought at Flodden Field in 1513. The church also has one of the finest collections of monumental brasses in the area, including the only brass in Britain of an English Civil War officer in full armour, Major-General Sir Ralph Assheton.[3]

The church was designated a Grade I listed building in 1957.[5]

Industrial polymer, thermoplastics and nonwovens producer The Vita Group have a registered office in Middleton.[6] Kitbag operate a distribution centre from Greengate in Middleton.

Bluebird Bus and Coach is a travel company based in Middleton.[7] Bus company JP Travel has been based in Middleton since 1974.[8] Robert McBride, a household and personal care product manufacturers, is also based in the town.[9] 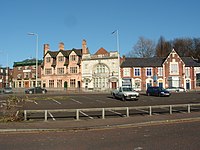 Several of Middleton's buildings were designed by Edgar Wood, a local-born influential architect of his day. Several in Middleton are landmarks and are notable.[10]

Middleton has recently benefited from redevelopments which have seen the construction of a new sports, leisure and civic centre, 'Middleton Arena'. A large new Tesco supermarket has also just been opened in the town centre.

In the early 1970s, The Arndale Property Trust cleared land adjacent to Middleton Gardens to build an 'American-style' modern shopping precinct. The Middleton Arndale Centre commenced trading in 1971, although it was officially opened by Her Royal Highness the Duchess of Kent in March 1972.

Situated below the parish church, on Long Street, this was originally a coaching inn on the road between Chester and York. It is said to date from at least 1632.and part of it go back to the 1500s

Alkrington Hall was built in 1736 and was the seat of the Lever family. Its dominant position on a wooded hillside, looks out over the Irk Valley towards Middleton. The original parkland around the hall has now been developed into high end housing.

Tonge Hall is a Tudor structure, badly damaged by an arson attack in 2007.[11]