Richmond or occasionally Richmond on Thames is a prosperous, suburban town in northern Surrey. It stands on the bank of the River Thames, the town constrained between the Thames to the west, Richmond Park to the south-east and the Old Deer Park and Kew Gardens to the north-west. It has become contiguous with the London conurbation to the north-east, where Richmond adjoins Kew, North Sheen and East Sheen

Richmond now forms a significant local commercial centre with a number of parks and open spaces and has a developed retail and night-time economy.

The town derives its name and early growth to the building of Richmond Palace by King Henry VI in the early 16th century, and its nineteenth century expansion to the coming of the railway, Richmond railway station opening in 1846.

Richmond is one of thirty-five major centres identified in the "London Plan".[1]

Richmond has a compact centre, largely focused on George Street and Hill Street, with some pleasant narrow alleyways running off towards The Green. Shops tend to be of the more costly variety, with numerous designer boutiques as well as more recognisable names such as Marks & Spencer and House of Fraser. Unlike nearby Kingston upon Thames, Richmond has no indoor shopping centres and is largely populated by smaller units which add to its appeal.

Richmond is also well known for its pubs, secluded cafés, and its farmers' market which takes place on Saturdays 11 to 3. Traders from a wide range of backgrounds come to sell culinary goods such as dairy products, meats, baked goods and vegetables.

Sights within the town

The river is a major contributor to the interest that Richmond inspires in many people. It has a lively frontage around Richmond Bridge, containing many bars and restaurants. The area owes much of its "Georgian" character to the architect Quinlan Terry who restored and rebuilt much of the area in 1984-87. Within the river itself at this point are the leafy Corporation Island and the two small Flowerpot Islands.

The Thameside walkway provides access to residences, pubs and terraces, and various greens, lanes and footpaths through Richmond. The stretch of the Thames below Richmond Hill is known as Horse Reach, and includes Glover's Island. Skiffs (fixed seat boats) can be hired by the hour from local boat builders close to the bridge, and there is a large tour boat that departs hourly from the Richmond bank of the river. The only rowing club on this stretch of the Thames is Twickenham Rowing Club but its members are joined on the water by those of Richmond Canoe Club. There are towpaths and tracks along both sides of the river, and they are much used by pedestrians, joggers, and cyclists.

Wide-angle view of the northern half of Richmond Green

Close to the town centre are Richmond Green and the Little Green. Richmond Green is roughly square in shape, is quite large and hosts regular cricket matches. On summer weekends and public holidays (given good weather) the two greens attract hundreds of sunbathers, residents and visitors. The Green is surrounded by well-used metalled roads that provide for a fair amount of vehicle parking. At the north corner is pedestrian access to Old Deer Park (plus vehicle access for municipal use); the south corner leads into the main shopping area of the town; at the east corner is Little Green, and at the west corner is the old gate house which leads through to other remaining buildings of the palace.

To the right of Little Green is the start of the charming Old Palace Lane running down to the river. Close by to the left is the renowned terrace of well preserved three-storey houses known as Maids of Honours Row. These were built in 1724 for the maids of honour (trusted royal wardrobe servants) of the wife of George II.

From the sixteenth century onwards, tournaments and archery contests have taken place on the green, while cricket matches have occurred since about 1650. There was a public house named 'The Cricketers' here in 1770, but it was burned down in 1844. It was soon replaced by the present grade II listed building shown here. Samuel Whitbread, founder of Whitbread Brewery part-owned it with the Collins family, who had a brewery in Water Lane, close to the old palace.[2]

Until recently, the first recorded county cricket match was believed to have been played on Richmond Green in 1730 between Surrey and Middlesex. It is now known, however, that an earlier match between Kent and Surrey took place in Dartford in 1709.[3] The old palace overlooked the river from its south-west front. One of the earliest detailed paintings of a Morris dance was painted here. It dates from about 1620 and shows a fool, a hobby-horse, a piper, and Maid-Marian and three dancers on the bank of the Thames.

The Richmond Theatre at the side of Little Green is a Victorian architecture|Victorian structure designed by Frank Matcham and restored by Carl Toms in 1990. It has been used as a set for many recent films (for example Finding Neverland and The Hours). The theatre has a weekly schedule of plays and musicals, usually given by professional touring companies. Shows awaiting a launch in the West End can sometimes be seen. There is a Christmas and New Year pantomime tradition and many of Britain's greatest music hall and pantomime performers have appeared here.

Richmond is well endowed with green and open spaces accessible to the public.

Richmond Park, to the east and south of Richmond is a royal park; now the largest royal park in the region. It contains a large area of wild heath and woodland originally enclosed by Charles I for hunting. It is both a National Nature Reserve and a Site of Special Scientific Interest. It contains on a permanent basis around 650 red and fallow deer.[4]

The Old Deer Park lies to the north of the town. It is a 360-acre Crown Estate landscape extending from the town along the riverside as far as the boundary with the Royal Botanic Gardens at Kew. The Park contains wide green lawns, municipal sports pitches and playing fields, rugby and athletic grounds, swimming pools, two Royal Mid-Surrey golf courses, and the Grade I listed former King's Observatory erected for George III in 1769. 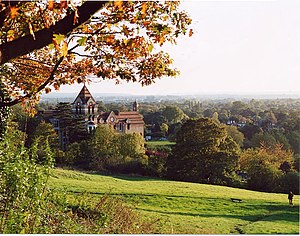 Rising southwards from Richmond Bridge is Richmond Hill, together with the Terrace Gardens that slope up from the River Thames. These gardens were laid out in the 1880s and were extended to the river some forty years later. The broad gravel walk along the top of the hill is of earlier vintage and the view from there west towards Windsor has long been famous. A grand description of the view can be found in Sir Walter Scott’s novel The Heart of Midlothian (1818). Apart from the great rugby stadium at Twickenham and the aircraft landing and taking off from Heathrow Airport the scene has changed little in two hundred years. The view from Richmond Hill now forms part of the Thames Landscape Strategy which aims to protect and enhance this section of the river corridor into London.[5][6] It is a common misconception that the folk song "Lass of Richmond Hill" relates to this hill, but the song is actually based upon a lass residing in Hill House at Richmond in the Yorkshire Dales.[7]

The city of Richmond, capital of the Commonwealth of Virginia, derives from Richmond in Surrey; its founder had spent time in Richmond during his youth and knew that the views from the hills overlooking the rivers in both places were similar. These two Richmonds are now twin towns.[8] 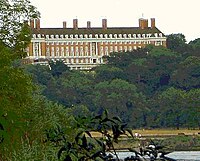 A commanding feature on the hill is the former Royal Star and Garter home. During World War I an old hotel on this site, which had been a popular place of entertainment in the 18th and 19th centuries but had closed in 1906, was taken over and used as a military hospital. After the war it was replaced by this handsome building providing accommodation and nursing facilities for 180 badly injured servicemen. It was run as a charitable trust, and continues to be, but the trustees have concluded that the building does not now meet modern requirements and cannot be easily or economically upgraded. There are now plans to transfer the 180 patients to three separate sites in other locations, at least one of which they hope will be in or near Richmond. The future of this listed building is at present uncertain. Nearby is the factory, staffed mainly by disabled ex-servicemen and women, which produces the poppies sold each November for Remembrance Day.

History of a residence 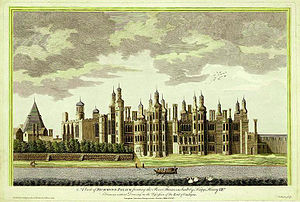 The area now known as Richmond was known as Shene until about five centuries ago, a name preserved in East Sheen and North Sheen. Shene is not listed in the Domesday Book of 1086, but its early name is believed to derive from an Old English name Sceon or similar.

King Henry I lived briefly in the King's house in "Sheanes". In 1299 Edward I took his whole court to the manor-house at Sheen, a little east of the bridge and on the riverside, and it thus became a royal residence. After William Wallace was executed in 1305, it was in Sheen that the Commissioners from Scotland went down on their knees before King Edward. Edward II, after his defeat at the Battle of Bannockburn in 1314, founded a Carmelite monastery at Sheen. When the boy-king Edward III succeeded in 1327 the manor was given to his mother, Isabella. Later in his long reign, Edward spent over two thousand pounds on improvements but died in the midst of the work in 1377. Richard II was the first English king to make Sheen his main residence, which he did in 1383. Twelve years later Richard was so distraught at the death of his wife Anne of Bohemia at the age of 28, that, according to Holinshed, he "caused it [the manor] to be thrown down and defaced; whereas the former kings of this land, being wearie of the citie, used customarily thither to resort as to a place of pleasure, and serving highly to their recreation." It was rebuilt between 1414 and 1422, but destroyed by fire 1497.

King Henry VII had a palace built at Sheen in 1501, which named it "Richmond Palace" after his title as Earl of Richmond, taken in turn from Richmond in Yorkshire. The town that developed around the palace took its name. Queen Elizabeth I spent much of her time at Richmond, and it was at Richmond Palace that she died on 24 March 1603.

The palace was no longer in residential use after 1649. In 1688 James II ordered partial reconstruction of the palace as a royal nursery, only to flee the same year. The bulk of the palace had decayed by 1779; but surviving structures include the Wardrobe, Trumpeter's House (built around 1700), and the Gate House, built in 1501. This has five bedrooms and was made available on a 65-year lease by the Crown Estate Commissioners in 1986.

The town has two professional theatres, the Richmond Theatre, which receives major national tours, and the Orange Tree Theatre, a producing theatre in the round which has acquired a national reputation for the quality of its work and for discovering undeservedly forgotten old plays. The town also has three cinemas, the arthouse Curzon in Water lane and two Odeon cinemas with a total of seven screens, one located upon entry to Richmond via the bridge, and the second set further back nearby.