Surbiton is a suburban town in Surrey, lying along the River Thames to the south of Kingston upon Thames. It is a residential town with an interesting mixture of styles; Art-Deco courts, modern residential blocks (of the better designed sort) and grand, spacious 19th-century townhouses blending into a sea of semi-detached 20th-century housing estates.

Surbiton is a popular rail commuter town, located approximately 10 miles to the south-west of central London (12 miles by rail from London Waterloo). It has become the very essence of Surrey suburbia, for which reason the town is often nicknamed "Suburbiton".

The town started to prosper when a plan to build the main railway line down to the south coast closer to nearby Kingston was rejected by Kingston Council, fearing the detrimental effect it would have on the busy coaching trade. This resulted in the line being routed further south, through a cutting in the hill south of Surbiton. Surbiton railway station opened in 1838, and was originally named Kingston-upon-Railway.[1] It was only renamed Surbiton to distinguish it from the new Kingston railway station on the Shepperton branch line, which opened on 1 January 1869. The present station has a fine art deco façade.

As a result, Kingston is now on a branch line, whereas passengers from Surbiton (smaller in comparison) can reach Central London in about 15 minutes on the main line, with a fast service into London Waterloo, as well as places further afield, including Portsmouth and Southampton. This has made Surbiton a convenient location from which to commute into Central London, reflected in the size of its population.

Starting in the early 2000s, a West London Orbital underground railway, which would terminate at Surbiton, has been promoted by the influential West London Business group. 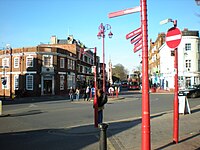 Surbiton's main claim to popular fame is as an icon of suburbia in such British television programmes as:

The Pre-Raphaelite painters John Everett Millais (1829–1896) and William Holman Hunt (1827–1910) came to Surbiton in 1851, 26 years before Richard Jefferies (1848–1887). Millais actually used the Hogsmill River, close to Tolworth Court Bridge, as the background for his painting ‘Ophelia’. Holman Hunt used the fields just south of this spot as the background to ‘The Hireling Shepherd.’

In the mid 1870s the novelist Thomas Hardy (1840–1928) lived in a house called 'St David's Villa' in Hook Road, Surbiton for a year after his marriage to Emma Gifford. The writer Enid Blyton (1897–1968) was governess to a Surbiton family for four years from 1918, at a house called 'Southernhay', also on the Hook Road. CH Middelton (1886-1945), who broadcast on gardening during the Second World War, lived in Surbition, where died suddenly outside his home.[2]

Kingston Regatta on the Thames at Surbiton

A 1972 episode of Monty Python's Flying Circus featured a mock documentary which investigated whether the residents of Hounslow, a Middlesex suburb, had been long-ago descendants of the people of Surbiton "who had made the great trek north."[3]

Surbiton station features in the 2009 film version of Harry Potter and the Half-Blood Prince’’. Filming took place in November 2007.