Chertsey is a town in north-western Surrey, on the River Thames. The River Bourne enters the Thames here. The town is part of the London commuter belt, and is served by Chertsey railway station on the Chertsey branch of the Waterloo to Reading Line. Egham today is somewhat hemmed in by the M3 to the north and the M25 to the west.

The town lies alongside Addlestone, Woking, Thorpe and Egham. Across the Thames no town lies immediately opposite Chertsey, and the town's bridge leads over into Middlesex to be greeted by an area given up to gravel pits, and roads leading to Laleham and Shepperton.

Chertsey lies within the Godley hundred. 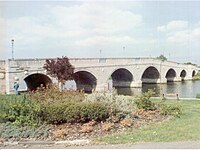 Chertsey is one of the oldest towns in England. It grew around Chertsey Abbey, founded in 666 by Eorcenwald, Bishop of London. One of the earliest surviving English royal charters is a grant of lands to Chertsey Abbey by Frithuwald, King of Surrey, though the charter refers to an earlier grant by the King of the West Saxons. In the 9th century Chertsey Abbey was sacked by the Danes and refounded from Abingdon Abbey by King Edgar I in 964.

Chertsey appears in the Domesday Book as Certesi. It was held partly by Chertsey Abbey and partly by Richard Sturmid from the abbey. Its Domesday assets were: 5 hides, 1 mill and 1 forge at the hall, 20 ploughs, meadow, woodland worth 50 hogs. It rendered £22.[1]

The Abbey grew to become one of the largest Benedictine abbeys in England, supported by large fiefs in the northwest corner of Sussex until it was dissolved by Henry VIII in 1536. The King took stone from the Abbey to construct his palace at Oatlands; the villagers also used stone for raising the streets. By the late 17th century, only some outer walls of the Abbey remained.

Today the history of the abbey is reflected in local place names and the fishponds that still fill with water after heavy rain.

The eighteenth-century Chertsey Bridge[2] provides an important cross-river link, and Chertsey Lock is a short distance above it on the opposite side. On the south west corner of the bridge is a bronze statue of local heroine Blanche Heriot by Sheila Mitchell, FRBS[3]

In the 18th century Chertsey Cricket Club was one of the strongest in the country[4] and beat the rest of England (excluding Hampshire) by more than an innings in 1778. The Duke of Dorset, (who played cricket for Chertsey), was appointed Ambassador to France in 1784. He arranged to have the Chertsey cricket team travel to France in 1789 to introduce cricket to the French nobility. However, the team, on arriving at Dover, met the Ambassador returning from France at the outset of the French Revolution and the opportunity to extend civilisation sport across the sea was missed.

The Chertsey Regatta has been held on the river for over 150 years.

The Chertsey troop of the Berkshire Yeomanry have occupied the Drill Hall on Drill Hall road since 1977. The unit has close ties with the borough and was granted the freedom of Runnymede in 2009. The Drill Hall will close at the end of March 2010 and the troop will be forced to return to Windsor, as part of the severe cuts suffered by the Territorial Army in 2009-2010.

There is a local legend, much repeated and once popular nationwide, of Blanche Heriot and the Chertsey Curfew Bell. The earliest version of the legend has it that during the Wars of the Roses a local man, Neville Audley is condemned to die at sundown; he is to hang as soon as the curfew bell rings in the church tower. His friends hurry to London, bearing a token which will bring his reprieve, but as evening approaches they have not returned. Audley's sweetheart, Blanche Heriot climbs the church tower and wraps herself around the clapper of the bell and though thrown from side to side against the great bell she clings on so that it cannot sound until the reprieve has arrived.

There are many other versions, notably the poem "Curfew Must Not Ring Tonight", written in 1867 by the American poet Rose Hartwick Thorpe, in which the heroine is named Bessie and it takes place in Cromwell's time, and various versions have been made of this. There was even a music hall version, Nellie Hang on to that Bell.

The tale however appears not to be an ancient legend but the invention of Albert Smith, a playwright from Chersey whose play Blanche Heriot, or The Chertsey Curfew was produced in 1842, followed by a short story published the next year. A statue of Blanche Heriot stands in the town.

Chertsey has an admission-free museum on Windsor Street, which provides considerable information about the history of Chertsey. It features clocks by two local makers, James Douglass and Henry Wale Cartwright. [5] The Black Cherry Fair is an annual event which the Museum hosts. It includes live music and refreshments in the museum garden.