Bishop's Stortford is a historic market town in Hertfordshire, standing by the Essex border.

The town is found just west of the M11 motorway, on the county boundary with Essex and is the closest large town to Stansted Airport. It is part of the London commuter belt; 35 miles from London's Liverpool Street station. The town had a population of 34,826 in 2001.

The town stands on the River Stort, but the river is named after the town, not the town after the river. It is believed locally, not without reason, that early cartographers seeking a name for the river reasoned that "Stortford" must the ford on the Stort, and duly marked the river as such.

Nothing of historical significance is known of the Bishop's Stortford area until it became a small Roman settlement on the Roman road of Stane Street between Braughing and Colchester. After the Roman retreat from Britain in the 5th century, the small town was apparently abandoned.

A new English settlement grew up on the site, which is recorded in the Domesday Book as Esterteferd. In 1060, William the Norman, Bishop of London, bought the Stortford manor and estate for eight pounds, and the town has been known as Bishop's Stortford ever since.

At the time of the Domesday Book the town had a population of around 120 inhabitants. The Normans built a motte and bailey wooden castle in the town. In the early 13th century the town became a pawn in the disputes between King John and the Pope. The King seized the town from the Bishop and ordered the destruction of the castle in 1208 and then, soon after in 1214, had to pay for it to be rebuilt.

By the Tudor period the castle was in ruins (the mound still remains). Development of the town increased with the presence of a river and the roads. A weekly market was set up for farmers to sell their goods.

Only the font survives from the Norman church of St Michael's, which was completely rebuilt in the early 15th century, followed by alterations and restoration in both the seventeenth and 19th centuries. Both the belfry and the spire which dominates the town and surrounding countryside were built in 1812.

Despite outbreaks of the plague in the 16th and 17th centuries, the town continued to grow with an approximate population of 1,200 by this point.

After 1769, the River Stort was made navigable, and the town was made a stagecoach stop on the mail coach road between Cambridge and London.

Corner of the High Street 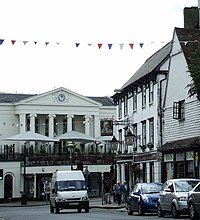 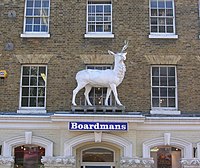 By 1801, Bishop's Stortford had become a market town and a corn exchange had been established while the main industry was malting. In 1842 the railway came to Bishop's Stortford; another introduction of the Victorian era was the opening of a hospital, in 1895.

At the beginning of the 20th century, in 1901, the population was over 7,000. By 1951, Bishop's Stortford had expanded further, to 13,000. During Second World War, Bishop's Stortford was the evacuation centre for many Britons, including the entire Clapton Girls Technology College. Throughout the second half of the 20th century, Bishop's Stortford has seen further growth since it became a commuter town. The M11 motorway, nearby Stansted Airport, and the train links to London and Cambridge have contributed to the town having a population of around 35,000, as of the 2001 national census, but future growth is expected to increase the population to 45,000.

In March and April 1825, a number of buildings in Bishop's Stortford were set alight and caused great alarm in the town. A committee was formed and a £500 reward offered for information on the arsonist. Soon a number of threatening letters were received, warning in part that "Stortford shall be laid in ashes".[1] Thomas Rees was arrested and found guilty on the charge of sending the letters, but not of arson. He was transported to Australia as a convict.

In 1935 the parish church of All Saints' Hockerill was destroyed by fire and in 1937 a new church, to a spacious, light and airy design by the architect Stephen Dykes Bower, was erected in its place. It is a Grade II listed building and the tower dominates the eastern skyline of Bishop's Stortford. The building contains a notable rose window designed by Hugh Easton, a two manual Henry Willis II organ and is a popular venue for concerts.

Harry Roberts was arrested in a wooded area within the abandoned RAF Sawbridgeworth at nearby Thorley whilst on the run from the Police following the shooting of three policemen in London in 1966. He was taken to Bishop's Stortford police station where he was charged and later moved to London. He was found guilty and sentenced to 30 years in prison.

The town centre is undergoing many changes, with the demolition of the old multi-storey car park and surrounding area to make way for a new town centre area and the building of new city-type apartments and penthouses on the riverside and around the town centre. Jackson Square (a modern shopping complex) was rebuilt and an extension added with many cafes, bars and shops. Also, the Havers estate (an outer part of Bishop's Stortford) is being redeveloped with new houses and flats. There are many plans for further expansion and development of the town due to its continued growth and the close proximity of Stansted Airport.

Bishop's Stortford is useful for a large number of Hertfordshire and Essex villages in its area, as most of the nearby towns (Harlow excluded) are small and Bishop's Stortford serves as a centre for meeting, shopping, and entertainment.

The Rhodes Arts Complex is a state-of-the-art venue which incorporates a theatre, cinema, dance studio and conference facilities. Situated within the complex, in the house where Cecil Rhodes was born, is the Bishop's Stortford Museum. It has a local history collection, a unique collection relating to Rhodes and the British Empire in Africa as well as its temporary exhibition gallery. Bishop's Stortford Museum

The town is home to various youth organisations and youth groups, including an Army Cadet Force detachment and an Air Training Corps Squadron. The ACF detachment is located at the Northgate Activities Centre and parades on Monday nights from 19:15 to 21:30. The Air Cadet unit, 1096 (Bishop's Stortford) Squadron is based in Waytemore Road (CM23 3GR) and parades on Monday and Thursday evenings and caters for cadets aged between 13-18. GAP Youth Group is affiliated with St James the Great Church in Thorley and is for teenagers from school year 8. The group offers fun, friendship and discussion on challenging everyday issues. This group meets every Sunday between 7:30pm and 9pm at the Barnabus centre, Church Lane, Thorley.[2]