The British Virgin Islands consist of the main islands of Tortola, Virgin Gorda, Anegada and Jost Van Dyke, along with over fifty other smaller islands and cays. Approximately 15 of the islands are inhabited. The capital, Road Town, is situated on Tortola, the largest island which is approximately 12 miles long and 3 miles wide. The islands have a population of about 22,000, of whom approximately 18,000 live on Tortola.

The Virgin Islands were first settled by the Arawak from South America around 100 BC (though there is some evidence of Amerindian presence on the islands as far back as 1500 BC).[1] The Arawaks inhabited the islands until the 15th century when they were displaced by the more aggressive Caribs, a tribe from the Lesser Antilles islands, after whom the Caribbean Sea is named.

The first European sighting of the Virgin Islands was by Christopher Columbus in 1493 on his second voyage to the Americas. Columbus gave them the fanciful name Santa Ursula y las Once Mil Vírgenes (Saint Ursula and her 11,000 Virgins), shortened to Las Vírgenes (The Virgins), after the legend of Saint Ursula.

The Spanish Empire claimed the islands by discovery in the early 16th century, but never settled them, and subsequent years saw the English, Dutch, French, Spanish and Danish all jostling for control of the region, which became a notorious haunt for pirates. There is no record of any native Amerindian population in the British Virgin Islands during this period, although the native population on nearby St Croix was devastated. Some Carib Amerindians still live on Saint Croix.

The Dutch established a permanent settlement on the island of Tortola by 1648. In 1672, the English captured Tortola from the Dutch, and the English annexation of Anegada and Virgin Gorda followed in 1680. Meanwhile, over the period 1672–1733, the Danes gained control of the nearby islands of St Thomas, St John and St Croix. 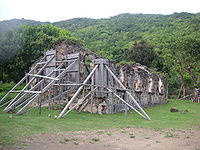 The British islands were considered principally a strategic possession, but were planted when economic conditions were particularly favourable. The British introduced sugar cane which was to become the main crop and source of foreign trade, and slaves were brought from Africa to work on the sugar cane plantations. The islands prospered economically until the middle of the 1800s, when a combination of the abolition of slavery in the colony, a series of disastrous hurricanes, and the growth in the sugar beet crop in Europe and the United States[2] significantly reduced sugar cane farming and led to a period of economic decline.

The British Virgin Islands were administered variously as part of the British Leeward Islands or with St Kitts and Nevis, with an Administrator representing the British Government on the Islands. Separate colony status was gained for the Islands in 1960 and the Islands became autonomous in 1967. Since the 1960s, the islands have diversified away from their traditionally agriculture-based economy towards tourism and financial services, becoming one of the wealthiest areas in the Caribbean. 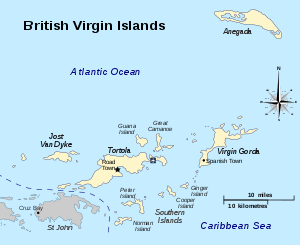 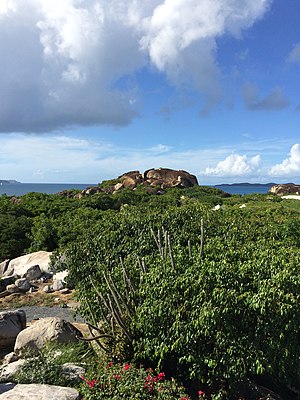 The British Virgin Islands comprise around sixty tropical Caribbean islands, ranging in size from the largest, Tortola 12 miles long and 3 miles wide, to tiny uninhabited islets. They are part of the Virgin Islands archipelago, a few miles east of the United States Virgin Islands. The North Atlantic Ocean lies to the north of the islands, and the Caribbean Sea lies to the south. Most of the islands are volcanic in origin and have a hilly, rugged terrain. Anegada is geologically distinct from the rest of the group and is a flat island composed of limestone and coral.

The four main islands are:

Sombrero Island lies between the Virgin Islands and Anguilla, and belongs to the latter territory. 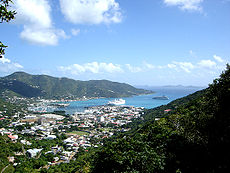 As a major offshore financial centre, the British Virgin Islands enjoy one of the more prosperous economies of the Caribbean region, with an average income per head of around $38,500 (2004 est.) The islands use the US dollar as their currency and has done since 1959.

The "twin pillars" of the economy are tourism and financial services. Politically, tourism is the more important of the two, as it employs a greater number of people within the territory, and a larger proportion of the businesses in the tourist industry are locally owned, as are a number of the highly tourism-dependent sole traders (for example, taxi drivers and street vendors). Economically however, financial services associated with the territory's status as an offshore financial centre are by far the more important. 51.8% of the Government's revenue comes directly from licence fees for offshore companies, and considerable further sums are raised directly or indirectly from payroll taxes relating to salaries paid within the trust industry sector (which tend to be higher on average than those paid in the tourism sector).

Tourism accounts for 45% of national income. The islands are a popular destination for American visitors. In 2006 a total of 825,603 people visited the islands (of whom 443,987 were cruise ship passengers). Tourists frequent the numerous white sand beaches, visit The Baths on Virgin Gorda, snorkel the coral reefs near Anegada, or experience the well-known bars of Jost Van Dyke.

The BVI are known as one of the world's greatest sailing destinations, and chartered sailing yachts are a very popular way to visit less accessible islands. Every year since 1972 the BVI has hosted the Spring Regatta, which is a seven-day collection of sailing races throughout the islands. A substantial number of the tourists who visit the BVI are cruise ship passengers, although they produce far lower revenue per head than charter boat tourists and hotel based tourists. They are nonetheless important to the substantial (and politically important) taxi driving community.

Substantial revenues are also generated by the registration of offshore companies. As of June 2008, 823,502 companies were so registered (of which 445,865 were 'active'). In 2000 KPMG reported in its survey of offshore jurisdictions for the United Kingdom government that over 41% of the world's offshore companies were formed in the British Virgin Islands. Since 2001, financial services in the British Virgin Islands have been regulated by the independent Financial Services Commission. While at one time the BVI was well regarded as a good domicile for captive insurance services, this changed beginning in recent years with the change of insurance regulators in 2007 and the government's increasing pressure to hire only locals ("belongers") in the insurance industry. Official reports from the Financial Services Commission reflect as of 30 June 2010 only 207 captives in the BVI. Informed sources report that the actual number is closer to 100, with the 50% decline over the last four years attributable to the lack of ability within the FSC in administering insurance companies. Beginning in 2008 there was a mass exodus of captives for better staffed jurisdictions like Anguilla.

Agriculture and industry account for only a small proportion of the islands' GDP. Agricultural produce includes fruit, vegetables, sugar cane, livestock and poultry, and industries include rum distillation, construction and boat building.

The British Virgin Islands are a major target for drug traffickers, who use the area as a gateway to the United States. According to the Foreign & Commonwealth Office, "Problems associated with drug trafficking are potentially the most serious threat to stability in the BVI".[4]

The population of the Islands is around 21,730 in 2003. The majority of the population (83%) are Afro-Caribbean, descended from the slaves brought to the islands by the British planters. Other large ethnic groups include those of British and other European origin.

The islands are overwhelmingly Christian (96%) with the largest individual Christian denominations being Methodist (33%), Anglican (17%), and Roman Catholic (10%).[5]

The islands are heavily dependent upon migrant labour. In 2004 migrant workers accounted for 50% of the total population. 32% of workers employed in the British Virgin Islands work for the Government. 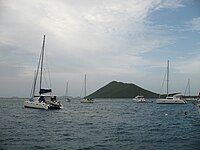 Sailing boats moored in the islands

Because of its location and climate the British Virgin Islands has long been a haven for sailing enthusiasts. Sailing is regarded as one of the foremost sports in all of the BVI. Calm waters and steady breezes provide some of the best sailing conditions in the Caribbean. Many sailing events are held in the waters of this country, the largest of which is a week-long series of races called the Spring Regatta.

This is the premier sailing event of the Caribbean, with several races hosted each day. Boats include everything from full-size mono-hull yachts to dinghies. Captains and their crews come from all around the globe to attend these races. The Spring Regatta is part race, part party, part festival. There are races, games, and music during the day, and some partying at night. The Spring Regatta is normally held during the first week of April.