Onchan (pronounced onk-an) is a village in the parish of Onchan on the Isle of Man, within the Sheading of Garff.

The village stands at the north end of Douglas Bay. Although administratively a village, it has the largest population on the island after the capital, Douglas, with which it forms a modest conurbation.

The name of the village is identified with St Connachan who was Bishop of Sodor and Man in 540 and the church named after him, Kirk Coonachan.[1][2]

The name given for the village in the Manx language (no longer a living tongue) is Kione Droghad meaning "bridge end". An early name recorded for the village is ‘’Kiondroghad’’ which literally translated means "bridgehead". The earliest written record of Kiondroghad was in the 1643 Manorial Roll, when it was very small. The name Kiondroghad appeared on the 1841 census but not the subsequent one a decade later.[3] 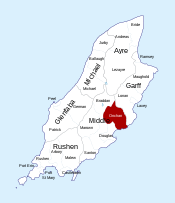 Location of the Parish of Onchan

Mankind has been here anciently; In the 1890s a 5,000 year old stone age axe was found in the Cassa Field by Onchan wetlands.

In the Viking period, Onchan became part of Middle sheading.[4]

The village of Kiondroghad remained little changed for a couple of centuries apart from the old cottages being replaced by newer ones if they fell into disrepair. Gradually the village moved out of Church Road, known locally as The Butt, and spread a little. At the junction with the track that led towards the mountains (Avondale Road) a few more cottages appeared in the early 19th century. As Onchan approached the 20th century land was sold off for terraces of houses to be built. The area surrounding Church Road today is the village's heritage area and the location of Molly Carooin's Cottage which is maintained by the Friends Of Onchan's Heritage, a local volunteer group. The area features period lamp standards and since 2001 has been home to the newly developed Village Green which links Church Road with the Onchan Wetlands to the north west. There is also a vehicle garage, highways department depot, barber shop and several residential dwellings in the area which leads to St. Peter's Church via the one-way road. The Jubilee Lamp was erected in this road in 1987 following relocation from White City, and this was the first electrically lit lamp standard on the island.

Onchan Head from the sea

In the early 20th century development was taking place in the Port Jack area as part of the Douglas Bay Estate Company’s promotion of land sales on the Howstrake Farm. Coupled with this they built an electric urban railway which later became a coastal railway to Ramsey. However, it never achieved its goal of connecting with the heart of Douglas to act as a commuter run. There was then a mixture of private houses, terraced houses and guest houses to take the overflow of visitors to Douglas. Further development took place in the 1930s.[5] During the Victorian and Edwardian tourism boom Onchan made a bid to become the island's second resort, encouraging the building of hotels and guest houses. The Manx Electric Railway was constructed in 1893 and in the early 20th century Lower Onchan, around the Port Jack area, was the first area on the island to have electric-powered street lighting, powered by the Manx Electric Railway generators.[2]

The Church of England parish church in Onchan is St Peter's on Church Road. The original church dated back to the 12th century which was dedicated to St Conchan. By 1760 the walls and roof had become dangerous and it was condemned in 1771. However, nothing was done until the Bishop commissioned a new church, and a foundation stone for the new church was laid in 1830, but due to pressures from the parishioners, was moved to its current position. The church was consecrated in 1833 and built by John Samuel Skillicorn. It was dedicated to Saint Peter. The church was refurbished in 1863. It was the first church on the island to be lit by electricity in 1897 to celebrate the Diamond Jubilee of Queen Victoria and was supplied by the Isle of Man Tramways and Power Company. [7]

A house in Onchan

The main shopping areas are The Village Walk, a small shopping arcade and Avondale Court, both off Avondale Road, Main Road and Port Jack. A house on the Whitebridge Road at one time had its own private miniature railway in its grounds. This was never a public railway. Onchan Community Centre is located off School Road with a community hall, sports hall, games room and committee room. There are a number of hotels and guest houses in the village and the Glen Dhoo and Lower Ballacottier campsites. DHSOB FC operate a campsite each year during the annual Isle of Man TT motorcycle racing.[8] The area has a number of residential housing estates including a large collection of local authority housing at Nursery Avenue, an estate at Ballachrink which also houses more local authority dwellings, Lakeside Gardens to the north east side of the village, Birch Hill, which can be found above the core village area and a number of older residences in the centre, notably Royal Avenue, Port Jack and Alberta Drive all of which were developed in the earliest years of the twentieth century.

William Bligh, an officer of the Royal Navy, and best known as "Captain Bligh" of Mutiny on the Bounty fame, married Elizabeth Betham, the daughter of a Customs Collector, on 4 February 1781 in Onchan.

(The leader of the mutineers who set Bligh adrift in the Pacific, Fletcher Christian, though born in Cumberland, was the son of a family from Kirk Michael, across the island.) 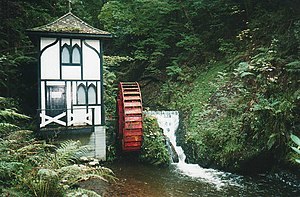 Groudle Glen and Molly Quirk's Glen meet at the Whitebridge, at the northern edge of the village on the main A2 coast road to Laxey.

Groudle Glen extends right down to the coast and has been described as one of the most spectacular of all the island's glens.

The glen was developed in the 1890s as a pleasure glen, with trees planted and long winding paths added. A bandstand, swings and various other minor attractions were also added. On the rocky headland, a small inlet had been dammed off to form a deep pool, which became the centre of the small headland zoo which exhibited sea lions and polar bears. To get visitors out to the highland zoo, the glen owners built a miniature railway.

Today, the attractions have all but disappeared apart from the Groudle Glen Railway, which still runs during the summer months operated by a group of local railway enthusiasts, who in the 1980s completely re-built the line after it was closed and ripped up in the early 1960s.[2]

Molly Quirk's Glen was reputedly named after a woman who was murdered in her cottage. The glen covers about 5 acres. At the far end of the glen the Clypse and Kerrowdhoo reservoirs now have a series of footpaths and ancient tracks for walkers.[2] This

Bilaloe Glen was named after a ford at the bottom of Whitebridge Hill.

The Raad ny Foillan (way of the gull) long distance coastal footpath opened in 1986 runs along the coast in Onchan beginning at Port Jack where it connects with Douglas and running as far as Howstrake Head before continuing into the neighbouring parish of Lonan.

The Onchan wetlands Manx: Curragh Kiondroghad are a 1-acre nature reserve in Onchan village that contains a variety of habitats. The site was donated to the Manx Wildlife Trust in 1988 and is open to the public for viewing and has a footpath which is suitable for wheelchair users.

The site contains curragh (wetlands - willow scrub), broadleaved trees, dub (pond), neutral grassland and embankments of tall grassland. This variety of habitats leads to a diversity of wildlife and plant life. Some of the plants and trees that grow in the wetlands are silver birch, ash, holly, rowan, marsh marigold, yellow flag, reed canary grass, hemlock water-dropwort, woody nightshade and cuckoo flower. Birds recorded on the site are the grey wagtail, goldcrest, woodcock, chiffchaff and hen harrier along with invertebrates and bats. There are also many frogs and spawn in early summer. [9]

Onchan Silver Band is a community-based fourth section brass band. It was founded in 1937.

Onchan Village Commissioners purchased farmland after Second World War to build new homes and a recreation area with a large park containing a stadium with the first ever banked cycle track which was opened by Reg Harris, World Champion Sprint Cyclist and Britain's Sportsman of the Year, on 19 June 1951. The park cost £50,000 to build. The stadium is no longer used for cycling.[2][11]