Walthamstow is a town in south-western Essex within the metropolitan conurbation. It is one of the major centres of this part of Essex.

The town is best known for its market, founded in 1885. The longest outdoor street market in Britain, indeed longer than any in Europe, Walthamstow Market fills the High Street, occupying all but the last hundred yards of the street.

Walthamstow is bordered to the north by Chingford, south by Leyton and Leytonstone, all of which are contiguous with it. To the east are the southern reaches of Epping Forest at Woodford. To the west are the River Lea and the Lea Valley Reservoirs around which the Lea and its associated canals find their way; a set of ten reservoirs lie squashed together, and the Banbury Reservoir just north of them. South of the reservoirs are the Walthamstow Marshes.

West of the Lea Valley in Middlesex is Tottenham; the A503 Forest Road / Ferry Lane crosses the valley from Walthamstow to Tottenham.

Walthamstow is recorded c. 1075 as Wilcumestowe ("Welcome Place") and in the Domesday Book of 1086 as Wilcumestou.[1]

King John visited Shern Hall (Shernhall Street), in 1213; the building survived until 1896. At one point Walthamstow was just a culmination of five small villages, and affairs were discussed at Vestry House, acting as the first town hall. In 1870 it had grown to the size of a small suburb and a town hall was built in Orford Road from which affairs of the village were run. Until the 19th century it was largely rural, with a small village centre (now Walthamstow Village — see below) and a number of large estates. The main route through the district was the aforementioned Hoe Street. Additionally, there were various smaller lanes, crossing the town. The road now known as Forest Road was originally called Clay Street. Further south, the High Street was named Marsh Street, and led from the original settlement out to the marshes. Shernhall Street is an ancient route, as is Wood Street, to the east.

With the advent of the railways and the ensuing suburbanisation in the late 19th century, Walthamstow experienced a large growth in population and speculative building.[2] From 1926 Walthamstow was incorporated as a municipal borough. In 1931 the population of the borough peaked at 132,972.[3] 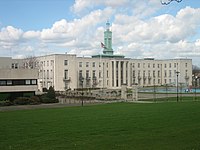 One of its most famous residents was the writer, poet, designer and visionary William Morris, who was born in Walthamstow on 24 March 1834, and lived there for several years. His former house in Walthamstow is a museum dedicated to his life and works, while the grounds of the house are a public park (Lloyd Park in Forest Road).

Local engineer, Frederick Bremer, built the first motor car in London between 1892 and 1894. In 1912 The Motor magazine, after much debate, recognised the Bremer car as the first British built petrol-driven car (now on display in the Vestry House Museum).

The Lighthouse Methodist Church which dates from 1893 which is on Markhouse Road, on the corner of Downsfield Road. There is a lantern at the top of the tower, which also contains a spiral staircase. The church was erected because of the generosity of Captain David King of the shipbuilding firm of Bullard King & Co which also ran the Natal Direct Shipping Line, which ran ships direct from London to Durban without stopping at the Cape.

The London General Omnibus Company X-type and B-type busses were built at Blackhorse Lane from October 1908 onwards; the B-type is considered one of the first mass-production buses.

On 13 June 1909, A V Roe's aircraft took to the air from Walthamstow Marshes. It was the first all-British aircraft and was given the ominous nickname of the "Yellow Terror" but officially carried the name Avro1. Roe later founded the Avro aircraft company, which later built the acclaimed Avro Lancaster.

Walthamstow saw lively involvement in the General Strike of 1926, with Winston Churchill's coach reportedly being overturned on Walthamstow High Street. Churchill was also given a hostile reception when he visited Walthamstow Stadium during the general election campaign of 1945. 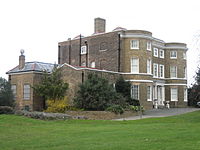 The High Street is dominated by Walthamstow Market, which began in 1885, and occupies all but the last 100 yards of the street. It is reputed to be a mile long, but in fact measures somewhat more than half a mile. The market is open five days a week and there is currently a Sunday farmers' market. Occasionally, a 'French' market takes place although the stalls are not necessarily French. The street is lined with shops: a selection of high-street chains, but also many independent small shops specialising in food, fabrics, household goods etc. as well as cafés. The overall tone is downmarket and unique. There are two patches of new-ish development: at Sainsburys, and The Mall Selborne Walk covered shopping centre[4] both of which have large multi-storey car parks.

The historic Central Library on the High Street was one of many built with money donated by the businessman and philanthropist Andrew Carnegie, whose portrait bust can be seen on the exterior of the building. It was modernised and expanded in 2006-2007, although there were claims that this was at the expense of book holdings.