Stroud is a hilly town in Gloucestershire, well stocked with historic buildings form its heyday as a wool and weaving town. Stroud stands at the bottom of the western escarpment of the Cotswold Hills at the meeting point of the Five Valleys. The town is noted for its steep streets and cafe culture.[1] The Cotswold Area of Outstanding Natural Beauty surrounds the town, and the Cotswold Way path passes by it to the west.

Stroud has a significant artistic community that dates back to the early part of the twentieth century. Jasper Conran called Stroud 'the Covent Garden of the Cotswolds',[2] the Daily Telegraph referred to it as 'the artistic equivalent of bookish Hay-on-Wye'[3] while the London Evening Standard likened the town to 'Notting Hill with wellies'.[4]

The town was one of the birthplaces of the organic food movement and was home to Britain's first fully-organic café, Woodruffs.[5] The Biodynamic Agricultural Association is based in the town.[6] For many years Stroud has hosted a fringe festival on the second weekend in September, though latterly on the first weekend in September each year, to coincide with the Stroud Festival Fortnight, including the walking and food festivals. The town also hosts an annual Vintage Fashion, Textile and Accessories Festival, and the fifth annual International Textile Festival was held in May 2010. This is the U.K's only festival to celebrate the diverse culture of textiles.[7] 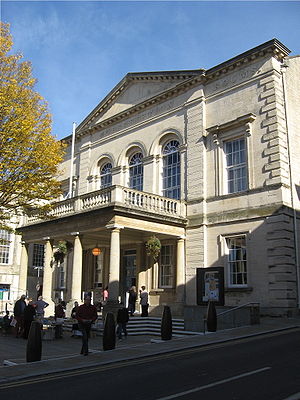 Stroud has a strong community of independent shops and cafés, which provide the mainstay of the retail experience in the town. Alongside this, the town centre has witnessed two controversial developments in the form of a new cinema (which replaced the bus station) and a branch of McDonald's which, when plans were unveiled in 2004, came against opposition from locals. The success of small businesses has, in recent years, caused a number of national retail chains to open outlets in the town.

The Subscription Rooms in the heart of the town centre provide a venue for entertainment and also house the local Tourist Information Centre.

On the fringes of the town are Stratford Park, originally the park of a small local weaver, now home to a leisure centre with an indoor and outdoor swimming pool, and the Museum in the Park, a museum of the history and culture of the Stroud valleys.

Whatever its reputation now, Stroud was a bright light of the Industrial Revolution.[8] It was a cloth town; woollen mills were powered by the small rivers which surge through the five valleys, and supplied by Cotswold sheep grazed on the hills above. Particularly noteworthy was the production of military uniforms in the colour known as Stroudwater Scarlet.[9][10]

In the seventeenth century many Huguenots fleeing persecution in Roman Catholic France settled in the town and formed a sizable community.[11] In the nineteenth century came a Jewish community, bringing expertise in tailoring and clothworking.[12]

The industries growing in nineteenth century Stroud craved better transport links, and soon came the Stroudwater Navigation canal and the Thames and Severn Canal. Both are closed but plans are afoot to restore the canals as a leisure facility.[13] 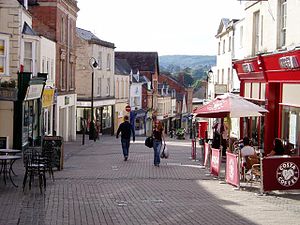 Stroud was once a hamlet within the parish of Bisley, and only began to emerge as a distinct village by the 13th century, taking its name from the marshy ground where the Slad Brook and the River Frome meet. The name ‘La Strode’ was first recorded in 1221. The church was built by 1279, and it was assigned parochial rights by the rectors of Bisley in 1304, often cited as the date of Stroud's foundation.

The townsfolk of Stroud are quick to form local action groups in the defence of their own against change. Thiese days the actions taken are somewhat more genteel than the Stroudwater Riots of 1825 and others of that time amongst the poor weavers of the town, but often more effective.

In the late 1970s Stroud Campaign Against The Ringroad saw off unwanted traffic plans, carrying the day at a Planning Inquiry.

A few years later the local council tried to demolish some 18th century buildings in the town centre and a Stroud High Street Action Group was formed, which held rooftop protests, and obtained a judgment in the High Court to prevent the demolition. The buildings have since been restored and remain a fine feature of the High Street. A compromise was reached in the demolition of buildings in Cornhill, many being saved, including one now identified as a mediæval house.

The Stroud Preservation Trust was formed out of this campaign and has been instrumental in saving many of the town's oldest buildings such as Withey's House, the Brunel Goods Shed and the Hill Paul building.[14]

The Stroud Save The Trees Campaign came to national prominence in August 1989 when the local council tried to implement a road-widening scheme. Knowing the likely reaction from the townsfolk, council workers arrived at Stratford Park to fell 13 trees swiftly at midnight before opposition could be mobilised. However local people got wind of the 'secret' and were there first to protect the trees. After a stand-off that lasted till dawn, the police called the operation off on the grounds of public safety. The following year the county's first 'traffic calming' scheme was installed instead. The trees remain to this day.

A few years later the council planned to fell the only mature tree in the town centre - the hornbeam on the Subscription Rooms forecourt, but a group was quickly mobilised, who persuaded them otherwise, and the hornbeam survived. 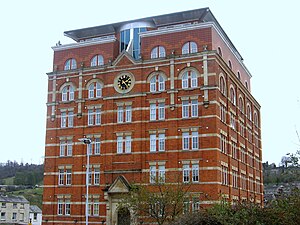 In the council gave permission for the Victorian landmark Hill Paul building to be demolished. After thwarting demolition, local activists formed a company and sold enough shares at £500 each to take an option on the building, which they passed on to a local developer. The building has now been restored and converted into apartments.[15][16]

The Save Stroud Hospitals Taskforce has been campaigning since spring 2006 against a range of cuts to health services in and around Stroud, with thousands of people taking part in street demonstrations. Stroud Maternity Hospital was saved in September 2006.[17]

The Uplands Post Office branch in Stroud was one of 26 in the county to shut as part of a nationwide programme to cut losses. Following local opposition, the Post Office agreed to talks with the council to look at how it could reopen. The town council agreed to provide £10,000 of funding for the service in 2008 and up to £25,000 for 2009. In November 2008 it was confirmed that Stroud has become only the second place in Britain to save one of its Post Offices.[18]

Protests were not successful in stopping Tesco fro opening a supermarket near Stratford Park in 1989 nor in stoopping McDonald's from building a fast food outlet at Rowcroft in 2005.

Churches in and around Stroud, all members of "Churches together in Stroud":

There is still a small textile industry; the green baize cloth used to cover snooker tables is made here. Today though, the town functions primarily as a centre for light engineering and small-scale manufacturing, and a provider of services for the surrounding villages.

The Stroud and Swindon Building Society has its headquarters here. Stroud is also home to the headquarters of the renewable energy provider Ecotricity.

In September 2009, the Stroud Pound Co-operative launched the Stroud Pound[19] local exchange currency as an attempt to reinforce the local economy and encourage more local production. The currency's design is being backed on a one-for-one basis beside the pound sterling, having a charge for redemption which is donated to local charities, and including a system of demurrage to encourage rapid circulation.

Places of interest near Stroud

Historic buildings and places of interest in the area include: 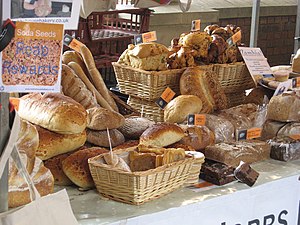 Bread loaves in the farmers' market

A farmers' market, launched by Jasper Conran and Isabella Blow on 3 July 1999,[20] takes place every Saturday at the Cornhill market. It was nominated for the national Farmers' Market of the Year in 2001 and won it in 2007. It also won the Cotswold Life magazine award for the best farmers' market in Gloucestershire in 2003, 2004 and 2005. The market is certified by FARMA.

In addition to the farmers' market there is a smaller market held in The Shambles, an area adjacent to the steep High Street.

John Wesley preached from a butcher's block in The Shambles on 26 June 1742.[21], opposite one of the oldest existing buildings in Stroud, the Old Town Hall.

The Old Town Hall, originally called the Market-house, was built in 1594[22] and is still in occasional use today.