The town of Alton began as a Roman settlement known as Vindomis. It was recorded in the Domesday Book of 1086 under the name Aoltone, and is notable for having the most valuable market recorded in the book.

Jane Austen knew Alton well as she lived in the nearby village of Chawton.

Treloar College, the National Specialist college for Young Disabled People, is in Alton 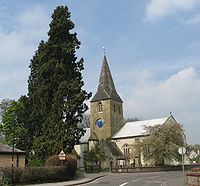 Alton Abbey in nearby Beech is that rare thing, a monastery within the Church of England, following the Benedictine Rule.[1] It was founded in 1895.

The arts in Alton

Alton Natives is a regular poetry and music open mic held in various public houses in the town.

A Roman road ran from Chichester to Silchester and there is evidence of a Roman posting station at Neatham near Alton, probably called Vindomis, and a ford across the River Wey. Centuries later, a Saxon settlement was established in the area and a large 7th century cemetery has been discovered during building excavations. It contained a selection of grave goods which included the Alton Buckle which is on display in the Curtis Museum, and is considered to be the finest piece of Anglo Saxon craftsmanship found in Hampshire. The buckle was found in the grave of a warrior, and has a silver-gilt body, set with garnets and glass.[3]

The River Wey has its source in the town, and the name Alton comes from an Anglo-Saxon word "aewielltun" meaning "farmstead at the source of the river".[4][5]

In 1001 the men of Hampshire met a Danish invasion at æþelingadene, which has been argued to be Alton or nearby. About 81 English were killed, including Ethelwerd the King's high-steward, Leofric of Whitchurch, Leofwin the King's high-steward, Wulfhere a bishop's thane, and Godwin of Worthy, Bishop Elfsy's son. Danish casualties were higher but they held the field and forced the English to flee to Winchester.[6]

Alton is listed as having the most valuable recorded market in the Domesday Book under the name Aoltone in the 'Odingeton Hundred — Hantescire'.[3][7]

In 1101 at Alton, King Henry I signed the Treaty of Alton with his eldest brother, Robert, Duke of Normandy, by which they agreed terms on which Henry held the English throne and Robert Normandy.

The first recorded market in Alton was in 1232, although the market at Neatham first recorded in the Domesday Book may also have been in the town.[8] Blome wrote in 1673 of a 'market on Saturdays, which is very great for provisions, where also are sold good store of living cattle'.[9] The Saturday market is also featured on Kitchin's map of Hampshire (1751) which marks the town as Alton Mt. Sat.[10]

The right to hold a fair was granted by King Edward I or Edward II; local historians disagree somewhat, but the Charter Rolls suggest it was granted on 22 November 1320 under King Edward II. The grant was for a 9-day fair on the vigil and feast of Whitsuntide and for seven days after.

There were two main manors in Alton - Alton Eastbrook and Alton Westbrook – and they had a fair each. The Westbrook fair is believed to be that granted in 1320 but that of Alton Eastbrook has no extant charter, and may never have had one, unless it was simply the result of parting the manor, each clinging to the right to a fair. The Eastbrook Fair it was originally held on St Lawrence's Day. This fair seems to have been held on Crown Close (which is in the manor of Alton Eastbrook) in the early 19th century. When this land was built upon, the fair moved and was held wherever the Westbrook fair was, which is to say the Market Place, various meadows and the Butts.

The date of the Eastbrook Fair was changed to Michaelmas in the mid-18th century as it came at harvest time and the farmers were not happy about that. Some accounts for this fair in the early 18th century do survive and show that there was a cheese fair as well the usual mix of travelling and local people with stalls and stands - people selling lace, gloves, books, gingerbread, bodices, sugar plums, toys [small items - not for children], soap and knives, to name but a few. By the late 19th century, this fair was said to be mainly for horses, sheep and, occasionally, hops.

Alton still has an annual fair, but it now takes the form of a fun fair not a trade fair.

A battle was fought in Alton during the Civil War. A small Royalist force was quartered in the town when on 13 December 1643 they were surprised by a Parliamentary army of around 5,000 men. The Royalist cavalry fled, leaving Sir Richard Bolle (or Boles) and his infantry to fight. Outnumbered, the Royalists were forced into the Church of St Lawrence, where Bolle was killed along with many of his men. Over 700 Royalist soldiers were captured and bullet holes from the battle are still visible in the church today.

In 1665, Alton suffered an outbreak of bubonic plague, the year it broke out in London, but soon recovered.[11]

On Saturday, 24 August 1867, an eight-year-old girl, Fanny Adams, was murdered. Her assailant, Frederick Baker, a local solicitor's clerk, was one of the last criminals to be executed in Winchester and one of the original public notices advertising his forthcoming execution hangs in the Crown Public House. Fanny Adams' grave can still be seen in Alton cemetery. The brutal murder, so the story goes, coincided with the introduction of tinned meat in the Royal Navy, and the sailors who did not like the new food said the tins contained the remains of "Sweet Fanny Adams" or "Sweet F A", hence the expression which for over a century has meant "nothing".

Brewing used to be one of Alton's main industries. The maltings still stand in Lower Turk Street, although it is no longer used for that purpose. They belonged to Halls Brewery from 1841 and were still producing malt in 1949. There have been a number of breweries in Alton since 1763 and today, Coors (one of the largest brewers in the world) has a brewery in Alton which produces Carling, Grolsch and Worthington.

The Pearce family in Alton owned and operated the Timber and Saw Mills from the 1890s to 1939, employing over 100 people and producing all the wooden tools used for the brewing industry in the town

Alton was also famous in the 18th century for the manufacture of paper[5] and of dress materials including ribbed druggets, shallons, silks and serges, bombazine and figured barragons.[12]

Alton today has thriving businesses in the retail and service sectors in the centre of the town, and over a hundred businesses in the four industrial areas of Mill Lane, Newman Lane, Caker Stream and Omega Park, ranging from light industrial to computer software production.[13] GE Energy, TNT NV and Poseidon Diving Systems all have businesses in Alton's Industrial Site, Mill Lane.

One of Alton's largest commercial employers is the financial services sector.

Alton today has a good range of shops, albeit many of the usual faceless chains as elsewhere. The town has developed a café-culture in recent years, again dominated by chain store names.