Wallingford is a beautiful market town in Berkshire, sitting on the banks of the River Thames in the upper Thames Valley.

The town is on the south bank side of the River Thames, which flows gracefully past, southward toward the Goring Gap, bridged at Wallingford by a 900-foot long mediæval stone bridge across the river and across the adjacent flood plain of the Oxfordshire bank. Wallingford lies at the foot of the Berkshire Downs. Across the bridge is the village of Crowmarsh Gifford. The two are linked by Wallingford Bridge. The southern end of the town adjoins Winterbrook, in the parish of Cholsey. 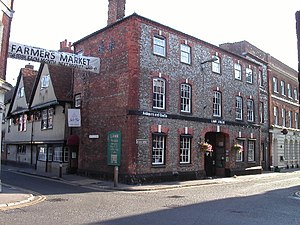 The centre of Wallingford has the feel of a fine old market town, its middle built around a large open town square where the war memorial stands. Here too is the 17th-century arcaded town hall and shops. Alleyways wander off from the street and here too are a number of historic inns.[1]

The Wallingford Museum contains exhibits about Wallingford and round about. The town also has the Corn Exchange theatre, the Cholsey and Wallingford steam railway

The town has two public parks, Castle Gardens and The Bullcroft, of which the former (owned by the Town Council) contains the ruin of Wallingford Castle, which once guarded the crossing of the Thames is more troubled times. A blues festival, and the annual BunkFest folk festival have taken place in the parks.

In recent years the town has been used as a location for filming, including Midsomer Murders, which has also featured the Parish Church Choir.

Although only a small town, Wallingford has three ancient churches within the Parish of St Mary-le-More and St Leonard. It once had 14 churches. St Leonard's is the home of Wallingford Parish Church Choir, named in 2011 as Britain's favourite church choir,[2]

Wallingford grew up around a strategic crossing point of the River Thames. The place has been fortified since at least Anglo-Saxon times, when it was an important fortified borough of Wessex with the right to mint Royal coinage. It was enclosed with substantial earthworks by King Alfred the Great in the 9th century as part of a network of fortified towns known as burhs or "burghs" to protect Wessex against the Vikings. These defences can still be clearly discerned as a group of four roughly square areas around the centre of the town and are probably the best preserved such fortifications in England. Wallingford became the chief town of Berkshire and the seat of the county's Ealdorman.

During the Norman conquest in 1066, the local lord, Wigod, allowed William the Conqueror's invading armies to cross the Thames unopposed from west to east in order that his army might march on Berkhamsted, where he received the English surrender before marching on London. At that time, the river at Wallingford was the lowest point at which the river could be forded. The town subsequently stood in high favour with the Normans.

The Domesday Book of 1086 lists Wallingford as one of only 18 towns in the kingdom with a population of over 2,000 people.

Ruins in the Wallingford Castle Gardens

Wallingford Castle was built soon after the Conquest and became a key strategic centre for the Empress Matilda's party during the civil war that began after the death of her father Henry I. The place was besieged a number of times and the Treaty of Wallingford ending the conflict was concluded here in November 1153. The town was granted a Royal Charter in 1155 by the new king, Henry II; only the second town in England to receive one.

The castle was a regular royal residence until the Black Death hit the town badly in 1349. The castle declined subsequently, much stone being removed to renovate Windsor Castle, but it became a Royalist stronghold during the English Civil War. It was the last holdout of the Royalists in Berkshire, and the castle withstood a 65-day siege. Oliver Cromwell subsequently ordered the destruction of what was left of the castle and little now remains. Some of the castle rubble was used to construct a tower for the church of St Mary-le-More.

Wallingford flourished as a trading centre throughout most of the Middle Ages, and Wallingford Priory produced two of the greatest minds of the age, the mathematician Richard of Wallingford and the chronicler John of Wallingford. After the opening of Abingdon Bridge in 1416 the town went into economic decline. 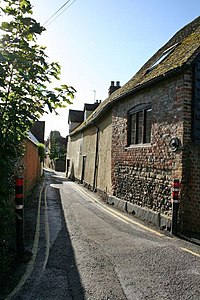 Wallingford's fortunes revived in the 18th century when the legal writer and Wallingford resident, William Blackstone, established two turnpike roads through the town. The brewing industry was important with two breweries and 17 maltings in the town. This link was ended with the demolition of Paul's Malt in 2001.

In 1944 a Royal Canadian Air Force Halifax bomber with a full bomb load caught fire over Wallingford. Most of the crew bailed out, but Flying Officer Wilding and Sergeant Andrew gave their lives to steer the plane away from the town and crash it into the fields of Crowmarsh. They are commemorated by an obelisk at the junction of Wilding Road and Andrew Road in Wallingford. 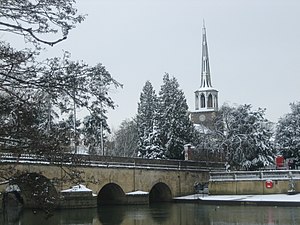 The River Thames has been a transport route for centuries and Wallingford's growth as a town relied partly on it. Coal was supplied from north-east England by coaster to London and then by barge upriver to Wallingford. This supply could be unreliable in seasons when river currents were too strong or water levels were too low.

In 1789 the Oxford Canal reached Oxford from Warwickshire and the Duke's Cut at Wolvercote gave it a connection to the Thames.[3] This allowed coal from the Midlands to reach Wallingford by a shorter and more reliable route than by sea and river from the north-east. In 1799 the Oxford Canal consolidated its commercial position by buying an eighty-year lease on a wharf on the Thames just above Wallingford Bridge.[4] Chalmore Lock, a summer or low-water lock and weir, was built at Chalmore Hole, Wallingford in 1838, However, much of the time the fall was only 18 inches, and the lock was open at both ends. It fell into disrepair, and the lock was removed in 1883.

The missing lock is the subject of confusion in Jerome K Jerome's "Three Men in a Boat". A ferry had operated at the site from 1787 to transport horses across the river where the towpath changed banks. As the removal of the lock and weir meant that this was the longest clear stretch of the upper river, it was an ideal site for rowing, and so the Oxford University Boat Club which had long trained here built a boathouse at Chalmore in 2006. In addition to the old Wallingford Bridge, a new bridge was built at Winterbrook in 1993.