The County of Peebles is a shire in southern Scotland.

The county is also known as Tweeddale, and is the land where the River Tweed rises and begins to grow. One of the smaller shires, just 222,599 acres, Peeblesshire has few towns; its main town is Peebles, the county town, and behind it Innerleithen, while most of Peeblesshire's acres are taken up in the fair hills and dales that characterise the county. 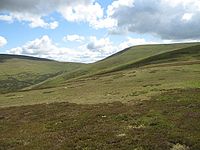 The surface of Peeblesshire consists of a succession of hills, which are highest in the south, broken by the valley of the Tweed and the lesser dales formed by its numerous tributaries.

The highest point of Peeblesshire lies south of the Tweed; Broad Law at 2,756 feet. Close by and almost as high is Cramalt Craig (2,723 feet).

In the north-west are the Pentland Hills, with such peaks as Mount Maw (1,753 feet), Byrehope Mount (1,752 feet) and King Seat (1,521 feet). The lowest point of the shire is on the Tweed as it leaves Tweeddale to enter Selkirkshire, where the banks are 450 feet above sea level.

The main river of the county is the Tweed, which rises here and takes the first 36 miles of its course here, almost a third of its length, as it flows through the south of the shire. This river has given Peeblesshire its alternative name; Tweeddale.

Several burns and rivers join the Tweed, including the Stanhope, the Drummelzier, the Manor and the Quair, the Biggar, the Lyne, the Eddlestone and the Leithen, the latter giving its name to Innerleithen.

The North Esk rises in Cairnmuir and forms the boundary between Midlothian and Peeblesshire for four delightfully scenic miles. The South Medwin at West Linton marks the boundary with Lanarkshire.

The rivers are well stocked and popular with anglers. 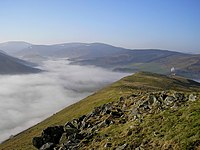 In the Roman age, Tweeddale was said to be in the lands of the Gadeni tribe, and of this time many Iron Age remains are found, such as camps and burial mounds. The standing stones near the meeting of the Lyne and Tweed are supposed to commemorate a British chief. The Romans did not avoid these hills; traces of their irruptions are seen at Lyne, in the remains of a Roman camp known locally as Randal's Walls.

After the Roman withdrawal from Britain, little is known for certain. Legend places King Arthur at here, fighting at Cademuir in 530, but nothing is known. Tweeddale was absorbed and settled by the Northumbrians and remained a part of the English Kingdom of Northumbria until the Viking invasions split that kingdom. Nevertheless, the earlier natives were not all gone as a number of place-names survive which derive from the British or Old Welsh language, including Peebles itself.

The Norse rulers of York did not often penetrate this far and native English rule persisted until the lands north of the Tweed were ceded to the King of Scots in the late tenth or early eleventh century. There is a record that this cession of "Lothian" was by King Edgar, though it is often taken as effective from the victory of King Malcolm II at Carham in 1018, and thereafter until the union Peeblesshire north of the Tweed was part of the Scottish kingdom, the rest following it in the Middle Ages.

King David I made the district a deanery in the archdeaconry of Peebles, and it afterwards formed part of the diocese of Glasgow. Towards the middle of the 12th century it was placed under the jurisdiction of two sheriffs, one of whom was settled at Traquair and the other at Peebles.

In 1304 at Happrew in the valley of the Lyne, the English defeated William Wallace. The Kings of Scots had a lodge at Polmood, and often hunted in the uplands and the adjoining forests.

During the mediæval wars, armies passed through in each direction, but the worst and most persistent harassment was from the lawless Border reivers, and this is the reason for the many castles and peel towers found across the shire.

In the Wars of the Covenant in the seventeenth century, Peeblesshire suffered little, but the Covenanters were here in a number of villages. In the churchyard of Tweedsmuir is seen the tombstone of John Hunter, one of the many celebrated slain in the trouble. Montrose came here having been defeated at Philiphaugh in 1645 and stopped in his flight at Traquair House. 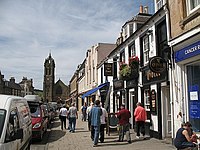 The local newspaper is the Peeblesshire News

Things to see in Peeblesshire 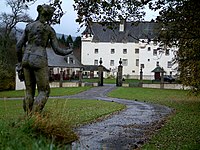