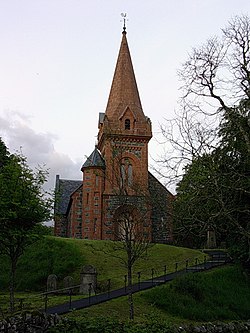 Tweedsmuir is a village and parish in Peeblesshire, set in a valley, with the rolling Cheviot Hills and burns on both sides. The parish covers some fifty square miles and incorporates settlements at Hearthstane, Cockiland, Menzion, and Oliver. It is situated eight miles from the source of the River Tweed.

Oliver Castle was one of the local strongholds, and later country estates, of the Clan Tweedie family.

The Parish Church of Tweedsmuir was built with Scottish red sandstone. There are notable Tweedie gravestones in the parish churchyard.

The Crook Inn is in the village, on the A701 road. It is one of many claimants to be the oldest inn in Scotland. It is where Robert Burns wrote "Willie Wastle's Wife".

The 22MW Glenkerie wind farm of Infinis is located three miles north-west of the village.[1]

The Talla Reservoir is nearby. In 1894 the Edinburgh and District Water Trustees decided to build Talla as the new source of water for Edinburgh. The surface and the gradient of the main road were unsuitable for carting the quantities of material that would be needed for the new reservoir, so the Talla Railway was built from Broughton to Talla. While work on the railway and the reservoir was in progress, a large number of workmen lived in Tweedsmuir, dramatically increasing the population.

The valve-closing ceremony was held at Talla on 20 May 1905, and on 28 September, when the reservoir was about two-fifths full, there was an inaugural ceremony. The large company was brought from Edinburgh in two special trains, which were hauled for the last stage of the journey, from Broughton Station, by small service engines on the Talla railway.

Fruid Reservoir is also nearby.