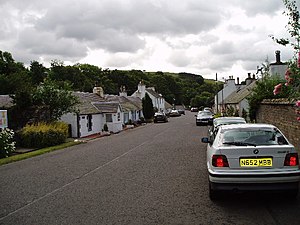 Eddleston is a small village and parish in Peeblesshire. It lies four miles north of the county town, Peebles and nine miles south of Penicuik on the A703 road, which passes through the centre of the village. Nearby is the Great Polish Map of Scotland, a large terrain map. The Eddleston Water runs through the village.

According to the 2001 census, there were 129 households, with a population of 335 people, 47% male and 53% female. Eddleston contains a few farms outside of the village centre. Barony Castle (also known by its earlier name of Black Barony), in the village, dates back to the 16th century, and was the property of the Murray Baronets, as was nearby Cringletie, which is now a hotel.

Eddleston's earliest recorded name was Penteiacob, in the Old Welsh or British language, and meant "headland of James's house". The Anglo-Gaelic of Gillemorestun of the 12th century AD meant "town of St Mary's lad", and gave rise to the current Gaelic name for the village, Baile Ghille Mhoire. It became Edulfstun in 1189 when it was granted to Edulf, son of Utred. This became Edoluestone (circa 1200) and Edwylstone (circa 1305), and was eventually fully Anglicised to Eddleston by the 14th century.

The Great Polish Map of Scotland

The Great Polish Map of Scotland is a three-dimensional concrete map in the grounds of the Barony Castle Hotel. It was constructed by Polish geographers in the mid-1970s. The map was conceived partly in recognition of the hospitality afforded to Polish soldiers during the Second World War. The idea for the map originated with Jan Tomasik who was the proprietor of the hotel from 1968-1981. It was constructed over a three-year period from 1974. In September 2012 the Scottish Culture Secretary announced that the map had been awarded category B listed status.[1][2]