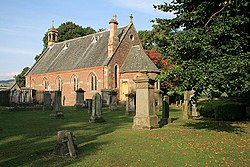 The parish is located along the valley of Manor Water, a tributary of the River Tweed. The Tweed forms the northern boundary of the parish and the Manor Water the winds its way to the north-east, the point at which it joins the Tweed at Manor Bridge being the very north-easterly point of the parish. The population in 2011 was 140.

This Peeblesshire article is a stub: help to improve Wikishire by building it up.