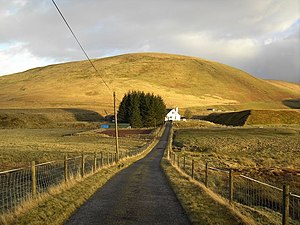 Hawkshaw was once a village in Peeblesshire, but today just a pair of semi-detached houses remains above water. The site is on the banks of the River Tweed, two miles south-west of Tweedsmuir.

The village was destroyed when the Fruid Reservoir was built in 1963, and is remembered as the ancestral family home of the Porteous family, dating from at least 1439.

A fortified tower stood on a hill overlooking the village for hundreds of years, although little remains of it now, its site being marked with a cairn built from stones from the original tower; this was probably one of a series of pele towers, small fortified keeps built in what was then the border country, intended as watch towers where signal fires could be lit to warn of approaching danger. A line of these towers was built in the 1430s across the Tweed valley from Berwick to its source (a few miles from Hawkshaw) as a response to the dangers of invasion from the south. Hawkshaw was one of over two dozen of these in Peeblesshire alone.

Roman artefacts have also been found in the vicinity, pre-dating the tower and indicating continuity of habitation in the area for some hundreds of years.