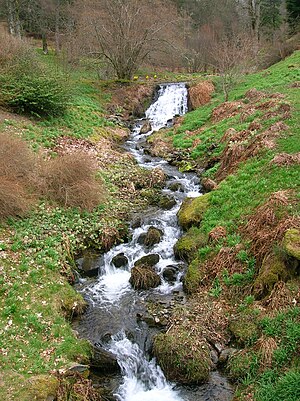 The Scrape Burn within the gardens

Dawyck Botanic Garden is a botanic garden and arboretum in Peeblesshire, covering 62 acres. It is found at Stobo on the B712, 8 miles south of Peebles. The garden is situated in the Upper Tweed Valley, a 'National Scenic Area'. 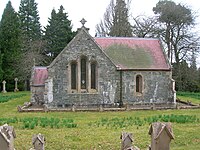 Dawyck Chapel within the gardens

The Veitch family planted the garden at Dawyck House in the 17th century until the Naesmith family took over in 1691. Sir John Murray Naesmith supported plant-hunting expeditions, especially those undertaken by the explorer and plant hunter David Douglas (1799–1834). In 1897 the Balfour family acquired the Dawyck Estate, and in 1978 they gave the Garden to the Royal Botanic Garden, with the exception of Dawyck House and chapel which remain in private use.

The private Dawyck Chapel, built in 1837, sits on the site of the ancient Dalwick Chapel within the gardens.

Views within the Botanic Gardens

Of the eleven "Heritage Trees of Scotland" in the Middle Shires, three are at Dawyck: