From Wikishire
(Redirected from North Esk)
Jump to: navigation, search 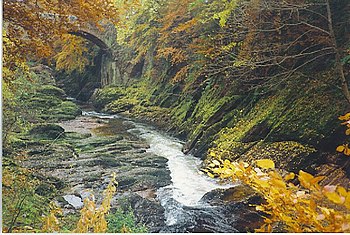 The North Esk at Gannochy Bridge

The North Esk is a river in Angus and which also forms the county boundary with Kincardineshire.

The North Esk is formed by the meeting of the Water of Mark (from Glen Mark) and the Water of Lee (from Loch Lee) in the hills of Angus. From that junction, the North Esk flows east and southeast through Glen Esk, all in Angus, turning definitively southeast below Fernybank.

A little below the Rocks of Solitude, the river meets and marks the county border between Angus to the west and Kincardineshire to the east. Soon, at Gannochy, the North Esk reaches its first real road bridge.

The river remains the county border down to the sea, and enters the North Sea four miles north of Montrose.

The North Esk was noted in the 19th century as a good point for fishing.[1]

Downstream of the meeting of the headwaters referred to above, the River North Esk is joined by various other tributaries. The Water of Effock enters on its right side and then the Water of Tarf enters on its left bank at Tarfside. The West Water is a considerable right bank tributary which enters near Stracathro in Strathmore. Its upper reaches are known as the Water of Saughs. The Luther Water is the last significant tributary of the North Esk; it enters on the left bank near North Water Bridge. The Luther Water drains the Howe of the Mearns.