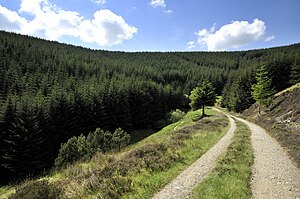 Glentress Forest in Peeblesshire spreads out over the southerly fells of the Moorfoot Hills immediately to the north of Peebles and the valley of the River Tweed.

The forest is part of the 'Tweed Valley Forest Park', along with Traquair Forest in Innerleithen.

During the 1930s, unemployed men were set to work in Glentress Forest, breaking ground, building tracks, and undertaking other heavy labour. The men lived in a work camp at Eshiels, which was one of a number of so-called Instructional Centres run by the Ministry of Labour in order to 'harden' young men who had been out of work for some time. By 1938, the Ministry was operating 35 Instructional Centres across Britain, with a total capacity of over 6,000 places. By 1939, unemployment was declining in the face of impending war, and the Ministry closed down its work camps.

The forest itself was planted in the 1920s in response to the national shortage of timber brought about by the First World War. Some of the original stands of Douglas Fir still remain to this day. There are remains of an Iron Age hill fort at the top of Janet's Brae which offers a spectacular vista over the town of Peebles. A short walk will lead you to the site where a reconstruction of a timber round house from the same Iron Age period used to stand until it was burnt down in 2010.

There is a mountain biking centre in the Glentress Forest which is one of the '7stanes' mountain bike trails operated by the Forestry Commission in the Southern Uplands. It is reckoned one of the most popular downhill mountain biking venues in Britain, and equipped too with good cross-country trails.

There are currently 5 mountain bike waymarked routes and a freeride park in Glentress Forest. The historic cycle trails, aimed at children and families, provide an interesting way to explore the forest and its history. The blue, red, and black mountain bike routes provide a challenge for all abilities. The red route is noted for a high-speed section with many bermed corners known as Spooky Woods. The green trail is a "skills loop", and is designed for those new to mountain biking, although there are some challenges for those wishing to practice rocky sections or raised wooden trails too.

The trails have been designed by local engineer Pete Laing. All routes are constructed to be weather proof and so are rideable all year round, although certain trails are best avoided in torrential rain.