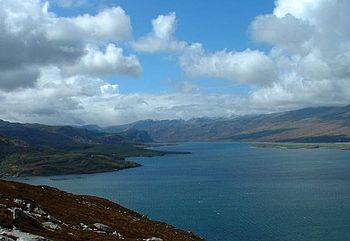 Loch Eriboll (Gaelic: Loch Euraboil) is a sea loch ten miles long cutting into the north coast of Sutherland, at NC445605. This loch, Great Britain's northern edge, has been used for centuries as a deep water anchorage as it is safe from the often stormy seas of Cape Wrath and the Pentland Firth. It is named after the village of Eriboll on its eastern shore.

Bronze Age remains can be found in the area, including a souterrain and a very well preserved wheelhouse on the hillside above the west shore. A small scale lime industry developed here in the 19th century.

Around the shores of the loch are the crofting townships of Eriboll, Laid, Heilam, Portnancon and Rispond. Eilean Hoan is a little island at the northern, seaward end of the loch and there are various small islets in the vicinity including A' Ghoil-sgeir, An Cruachan, An Dubh-sgeir, Eilean Clùimhrig, and Pocan Smoo.

Today, Loch Eriboll and its shores are a largely unspoilt wilderness, in a region of high rainfall and with the lowest population density in the United Kingdom.

The Royal Navy has been frequent visitors to the loch, particularly during the Second World War. Portnancon, on the western shore of Loch Eriboll, was where the company of HMS Hood spent their last shore leave before the Battle of the Denmark Strait, and there are stones arranged by sailors into the names of their warships (including Hood and Amethyst) on the hillside above the hamlet of Laid. It was nicknamed "Lock ’orrible" by the servicemen stationed here during the war because of the often inclement weather. The largest island in the loch, Eilean Choraidh, was used as a representation of the German battleship Tirpitz for aerial bombing practice by the Fleet Air Arm before the successful Operation Tungsten in April 1944.[1] The surviving 33 German U-boats, amongst them U-532 and U-295, formally surrendered here in 1945, ending the Battle of the Atlantic.[2]

A leased area of the shore and loch is classified as a Minor training area by the Defence Training Estate,[3] generally being used for amphibious and specialist training for three fortnights per year.[4]